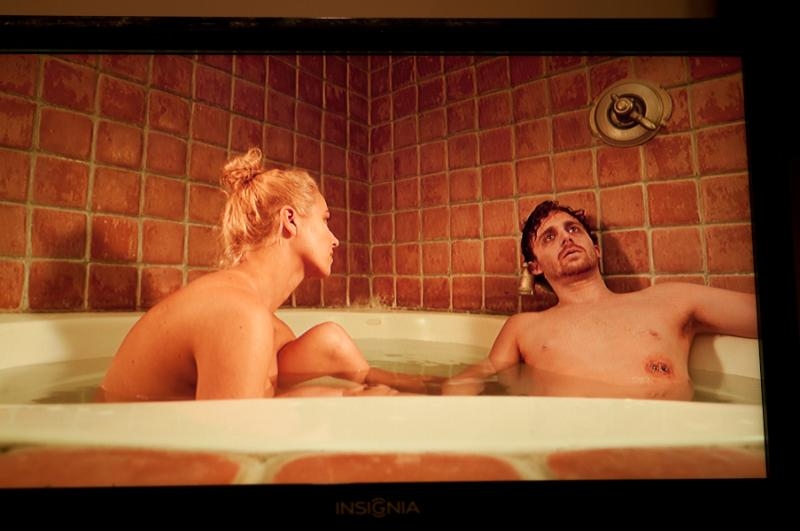 Relationships are defined by their boundaries. When two people become romantically involved, there are boundaries that must be maintained for that relationship to thrive. When the boundaries between parents, children, brothers and sisters are threatened, the core of a person’s identity is at risk. The importance of our ability to create and set our own relationship boundaries is arguably the cause of so much controversy in today’s political discourse. With so much of our person inextricably bound to our relationships, it’s important to both question our own boundaries while seeking to understand those of others. This block of films is designed to help us accomplish the latter as they explore all types of relationships, from romantic to paternal.

CADET (Belgium)
Directed by Kevin Meul
Films like CADET, coupled with an extreme lack of personal motivation, are the reasons that I never participate in competitive sports. CADET brings the audience up close and personal with a father and son—coach and cadet on the track—as they train night and day for an upcoming race. It’s a familiar story, but the ferocity and swagger that Aäron Roggerman brings to the role of Steve the teen track-runner makes this film stand out on its own. The film’s exploration of the one-sided relationship that Steve and his father have with each other calls into question the actions of parents everywhere who push their children past their limits for nothing more than a blue ribbon.

Valediction (California)
Directed by Damian Sean Nemire-Pepe
If Fatal Attraction was directed by John Landis, the result would have been something akin to Valediction. The film’s pacing is a bit disorienting, as we’re not quite sure why that dude is sitting on the floor, nor are we sure why that chick is leaving him toast before leaving for work. It’s a useful strategy to toss up a bunch of questions for your audience to mull over while the answers unfold in front of them, and it suits the tone and pace of this film well. It’s a little hard to sympathize with the character of Kelly (Hollis Sherman-Pepe) since she’s trapped in a situation that she created by being codependent and insane, which takes the piss out of the film’s thematic implications—especially with the inclusion of a baffling post-credits scene.

Her Children Mourn (New York)
Directed by Marta Renzi
In my warped brain, a title like Her Children Mourn set me up to expect a horror film about a vengeful, undead matriarch. This was not the case—but that was in no way a bad thing. Her Children Mourn is actually a graceful meditation on losing a parent, and tells an in-depth story completely through the physical actions of the brother and sister on screen. Set against a bluegrass-infused soundtrack, the siblings react to their mother’s passing by thrashing and dancing their way through an ancestral barn. It’s an interesting perspective to take on the death of a loved one. So often, there are no words to properly express the broad spectrum of emotional upheaval that an event like this can cause. Watching these two simply let their bodies interpret these emotions was cathartic somehow—almost like an acknowledgement that language can only do so much, and perhaps there are times when movement is a proper response.

BONO (Spain)
Directed by Ciro Altabás
The comedy genre hasn’t been too prevalent this year, so it was refreshing to get a few belly laughs out of Ciro Altabás’s film about the identity crisis that comes from impersonating Bono in Zaragoza’s second greatest U2 tribute band. Most of the film’s comedic action takes place between band manager Raúl (Guillermo Ortega) and lead vocalist Bono (Alberto Lozano), and the two actors have great comedic chemistry. Lozano’s pre-show tantrum about how he doesn’t feel like a real artist played nicely against Ortega’s profanity-laden insistence that the show must go on. Overall, BONO was a prime example of how to do short comedy. It set up the joke quickly and effectively, and delivered the punchline at exactly the right time.

Violence Done Well (Norway)
Directed by Maida Hals
Maida Hals’s visual interpretation of Norwegian singer/songwriter Eline Thorp’s Violence Done Well is heavy on reflections—both literal and figurative. Mirrors shatter as the lithe movements of Alexander Montgomery-Anderson dance across the screen, behind which we see Thorp standing like a dancer in her own music box—spinning against her will. It’s a perfectly decent music video, but of the films in the “Relationship Boundaries” category, this one puzzled me the most. All of the other films have a clear cut sense of what type of relationship is being explored, but other than the fact that Violence Done Well features both a man and a woman, the nature of their relationship is fuzzy at best.

Four Frames (France)
Submitted by the EICAR International Film and Television School
A quirky romantic comedy that had flickers of Jean-Pierre Jeunet’s Amélie, Four Frames examines a relationship in which breaking up and making up has become so commonplace that it has become part of the couple’s everyday routine. The woman, apparently unhappy with the man’s lack of direction and spontaneity informs him that she will be leaving. The man, unfazed by this news, continues their conversation. It’s difficult to tell whether or not we should feel sorry for this couple. On one hand, it’s kind of adorable that despite making the claim that they’re through with the relationship, they always get back together. But on the other hand, what if they really can’t stand each other but have grown so accustomed to their life together that it’s impossible to start a new one.

Since part of the excitement and heartache of being human comes from the many relationships that we gain and lose throughout our lives, it’s comforting to see that so many of these films from all over the world communicate themes that resonate with those who watch them. Even during the moment when the last threads of a meaningful relationship unravel, it’s a unifying feeling to know that someone in Belgium can sympathize.