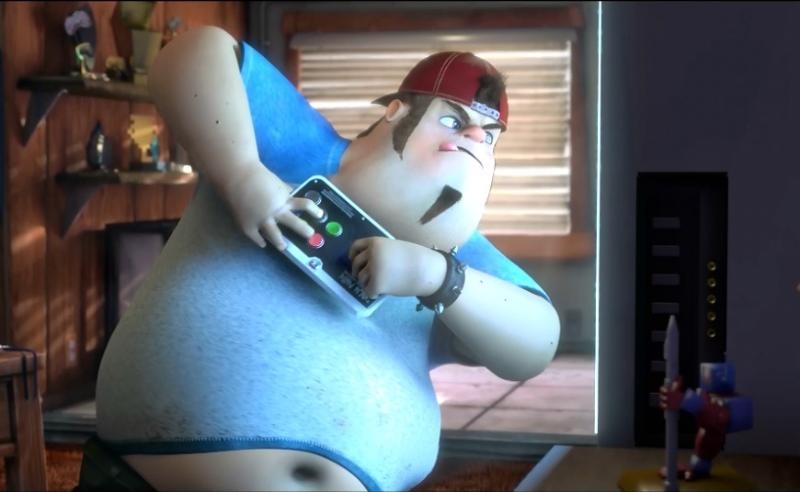 Fear No Film: Utah Short Film of the Year, Part 1

If the rapidly climbing temperatures are curbing your enthusiasm to peruse the outdoor portion of Utah’s annual Arts Festival, why not spend some time watching some of the world’s finest short films in a dark, air-conditioned theater? This year, the Arts Festival has accepted a wide range of submissions to their annual festival, each film fitting into a specific category that dares the viewer to question the boundaries that we have set for ourselves. In addition to their respective categories, the festival has also assembled a list of nominees for Utah’s Short Film of the Year. Each of these films was made locally, and represents the wide body of cinematic talent that can be found here in the Beehive State. The first four nominees encompass four very different perspectives—from Owned, an animated love letter to online gaming to Absolution Is Now Public, a disturbing critique of the digital age. Regardless of their tonal differences, there are some impressive entries in the contest so far.

Owned
Directed by Daniel Clark and Wesley Tippetts
At some point in a serious gamer’s career, they’re going to enter the vast and often disreputable world of online gaming. As it’s a world whose lifeblood is conflict and competition, it’s not a very friendly place. In Owned, a wonderful little chestnut from Brigham Young University’s animation studio, the world of online gaming is sized up and lampooned with just the right amount of charm. Technically, the film’s animation is beautiful—it’s no surprise that many alumni from BYU’s animation program often go on to find jobs with studios like Dreamworks and Pixar. What starts with an online matchup of a highly-experienced adult gamer and a small boy who looks to be playing their Street Fighter-like game for the first time. The adult, sitting comfortably in his basement apartment with all of his energy drinks and pizza pockets within arm’s reach, scoffs at his opponent’s lack of experience as he proceeds to equip two massive energy cannons to blow his challenger out of the screen. When the rookie has to run an errand for his mother, his infant sister picks up the controller, and a new game begins altogether. As someone who is currently fighting the urge to stop writing and play Elder Scrolls Online, it was evident that the team involved were cut from the same cloth as I was. Their sendup of games like Mortal Kombat and Soul Calibur perfectly captured the particular style of that genre, and after watching the film, I couldn’t help but wonder where I could get my hands on a copy of “Super Ultra Mega Fighter Turbo.”

Outlaws
Directed by Al Kessler Centennial Squadron
The Salt Lake 48-Hour Film Festival is not for the faint of heart. Each filmmaking team is assigned a character, a prop, a genre and a line of dialogue. Once they’ve received their assignments, they are tasked with using the next two days to write, score, shoot and edit their film for presentation to the festival committee. Working within these restrictive parameters forces filmmakers to dig deep into their creative instincts—and ingest way too much caffeine. Outlaws, this year’s winner, made it into Fear No Film’s short list of Best Utah Short Film nominees for its polished editing and surprisingly versatile locations. My first watch through had me a bit confused as to why our characters were so keen on trying to kill each other, a problem that would have been solved by cutting a few characters, from a cowboy-obsessed history professor and his double-crossing partner. Despite its occasional speed bumps, Outlaws remains an impressive piece of filmmaking considering the restrictions that were placed on the filmmakers. The wide variety of locations, for example, had my head spinning. If they haven’t done so already, the team needs to buy their location scout a beer. Bouncing from a college campus to a swimming pool to the desert and cutting the whole film together in two days seems like nothing short of miraculous.

Transmormon
Directed by Torben Bernhard
The polarizing effect that sexual identity has within the LDS church is no secret to anyone who reads the news. It’s a rapidly expanding and dizzyingly complex issue for both members and non-members of the LDS faith, and oftentimes the discourse surrounding it can turn ugly. Torben Bernhard’s documentary Transmormon makes a bold and heartfelt attempt to ignore the mortar shells that are fired from both camps in favor of simply telling a story about a loving LDS family and their own personal struggle with sexual identity. The film opens with a brief scene of Eri (formerly Eddie) Hayward’s morning routine and takes the audience through the struggles that she faced growing up. Though she outlines the difficulties that her LDS upbringing had on her process of self-discovery, neither she nor anyone else involved in the film has an anti-Mormon agenda—in fact, both she and her parents have remained as close as they possibly can to the LDS church. The beauty of this film comes from the honesty of its subjects. Eri’s interviews reveal a person who is no stranger to pain and self-doubt, but has chosen to rise above it rather than let it define her. Eri’s parents appear to have had a substantial influence on her decision to remain positive, and their perspective on the situation comes from a genuinely supportive and charitable place. The mark of a good documentary is its ability to tell an engaging story without losing its objectivity. Transmormon is a fine example of such filmmaking, and it’s a film that anyone who feels involved with the current political discourse in our state should watch.

Absolution Is Now Public
Directed by Michael Christensen
I always have an inner, artistic quandary when I watch a film like Absolution Is Now Public. Do I like it because it’s a disturbing little yarn that makes no apologies for its dark and bruising content? Or do I dislike it because it creeps me out, and deep down, I like movies because they’re entertaining? The respective hackles of each of these hemispheres were sufficiently riled as I watched Jace (James Morris—who also produced the film) let his obsession with Lauren (Evie Keener) and her tragically departed daughter wrap him up in a whirlpool of Facebook stalking and rabid video blogging. Perhaps the most jarring aspect of the film was how the claustrophobic cinematography made the audience feel trapped inside Jace’s rapidly deteriorating psyche. Switching between a grainy webcam and what appears to be real life, we see signs of Jace’s overreliance on the screens in his life. He’s often seen kneeling in front of them, as if waiting for some form of hi-def revelation to show him his purpose. Morris’s solo scenes are what make the film memorable. Even while he leers into the camera or pontificates on how technology makes us into gods, Morris manages to show us shreds of the decent guy that Jace used to be. It’s the scene when Jace and Lauren meet face to face that fell flat for me. Jace’s inability to look Lauren in the eyes was a bit heavy-handed, and the conversation left me seriously confused as to the nature of their relationship—a big deal since that is what drives the film’s conflict. As far as bare-bones, indie filmmaking goes, however, Absolution Is Now Public still manages to capture the punk-rock feel that reminds us why independent film is so exciting.