Fear No Film: Utah Short Film of the Year, Part 2 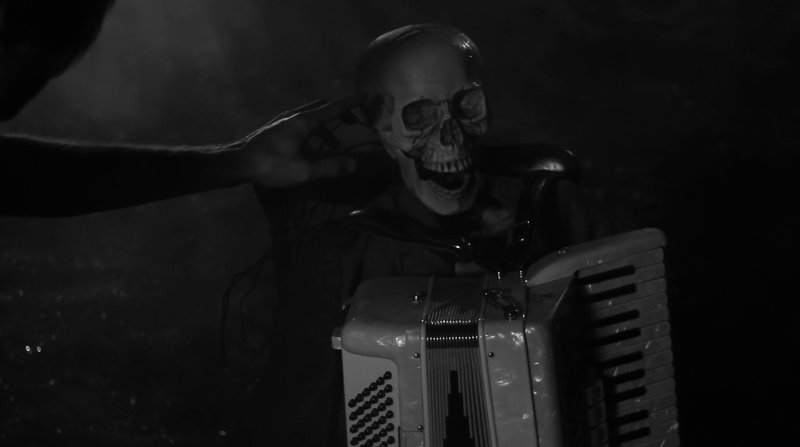 The Family Bible
Directed by Connie Wilkerson
A family heirloom is the hot topic of the family after Pauline commits suicide, leaving her son, Eric, an only child. Pauline’s sister Gladys comes to town, and is clearly the least favorite member of the family as she ignores conversations and acts casually about the event, single-eyed to getting the Family Bible back in her hands. The photography in the film is meticulous and delightful, and with a story-line that’s easy to get into, this film succeeds in evoking the inevitable family drama that surrounds any type of family event, especially after a family member dies.

The Black Balloon
Directed by Stephen King Simmons
A young boy falls asleep looking at a picture of a clown, as the balloon in the image slowly comes out of the frame and into his room. The boy follows it and after leaving his room, he looks around and finds himself at what seems to be an abandoned circus, as a full grown man. The circus slowly comes to life after he peers into the face of a skeleton holding an accordion, and after a flapper girl gives him popcorn and a soda (littered with cockroaches), the circus slowly comes to life as the boy, now a man, watches and snacks. The separation of the acts are covered by the two “zanies,” clowns that demonically laugh and act as if they feed off the gruesome. The zanies brought life to what would have otherwise been some fairly flat performances, but the sound editing and photography stay on point throughout the film.

Realm of Possibility
Directed by Adriana Martinez and Laela Omar
Exploring the reasons woman go to college or not, especially in Utah, Martinez interviews a number of women locally to see why they’ve chosen the path they take. Throughout the film, women share their stories of pursuing careers, marriage and motherhood, and how they juggle the demands of everyday life with the desire to pursue their interests in a college education. By the end of the film, Martinez comes to a realization that college isn’t only about pursuing a career, or for developing intellectually, but can be beneficial to develop as an individual connected to a community. I appreciated the individual perspective of the writer throughout the film, as this could have been an otherwise confusing mishmash of women’s opinions that don’t really provide a clear perspective like Martinez does.

FEAR NO FILM KIDS 3 & UP
I have a three year old nephew that I base everything that a kid might want to see off of, and of these four shorts, the only one I think he would have gotten remotely into would be Eideann, by Alvaro Granados, a digitally animated short that follows a Scottish bagpipe player across green pastures struggling with a variety of methods to try and crack open a nut. Lami, directed by Christophe and Olivier Defaye, a simple 2D animation featuring two eyes (one pink, one blue) that find each other and start singing “la” and “mi”, and falls pretty flat. A Purrfect Pair, by Gwyneth Christoffel, is more visually intriguing, with a story of a cat and a dog, still felt more like it was made for a newborn baby than a three year old, and Poison Apple, by Dane Neves. A Snow White story from the apple’s perspective, seemed too complicated of a story line for a three year old to follow, without enough visual cues to remain interested.

SuperDate (3min, New York)
Directed by Sasha Fox
A girl wearing a Batman shirt wants to hang out with her friend, but when he shows up wearing a Superman shirt, she flips out and gets mad at him for not going with the Batman theme she wanted. After air-fighting in the park, the guy comes back with Batman strapped across his chest and she’s happy to hang out with him now. Is the message here supposed to be to succumb to the brats that want you to dress a certain way in order to hang out with them? Because that’s certainly what it felt like.

Kickstand (11 min, Illinois)
Directed by Thomas Schulz
Typical of a kid’s neighborhood war, this film is empowering for the little guys as they fight against the bullies that stole a kids bike.

Regione Caecorum “In the Land of the Blind” (3 min, Wisconsin)
Directed by Drew Goldsmith
A stop-motion with American Girl looking dolls, this short film was fun to watch, but the subject matter seemed a little questionable. The group of people are all “Speed-Dating,” with most of the dates in wheel chairs and quite a few ASL speakers. Norma, however, is on crutches, and people look at her questionably because of it. As she looks around the room at people matching up, she finds a card that reads “In the Land of the Blind, the One-Eyed Man is NOT King,” as it cuts to the credits.

A Ride Towards the Sea (3 min, France)
Directed by Damien Stein
This claymation follows a man on a scooter as he rides around town toward the sea, and along the way encounters sad sea creatures: first with a goldfish on a sign, then a penguin by the river, a mermaid in a picture, and a fish out of water on the sand nearby, all of which get released from his chest and return to the place they long for upon his arrival. While the claymation and shots were well-done, there was seemingly no thought to the sound editing, as if the sounds that were created during each tiny shot for the motion of the clay was left as is. It isn’t until he finally makes it to the beach that the directors overlaid a song, which makes the beach scene all the more epic, but this could have been much better had they given some care to that.

Black Rock Creek (5 min, California)
Directed by Malone Lumarda
While this film may fall flat for a lot of people, I was particularly drawn in as I reminisced exploring the creeks in my backyard when I was around the age that the girl in the film is. She follows the majesty of the forest and the beauty of each creature as she is drawn into the creek, being cautious at first and eventually embracing the water before returning to her mother when she calls. Somehow this whimsical short was able to win me over, but no doubt because I’ve been that girl before.