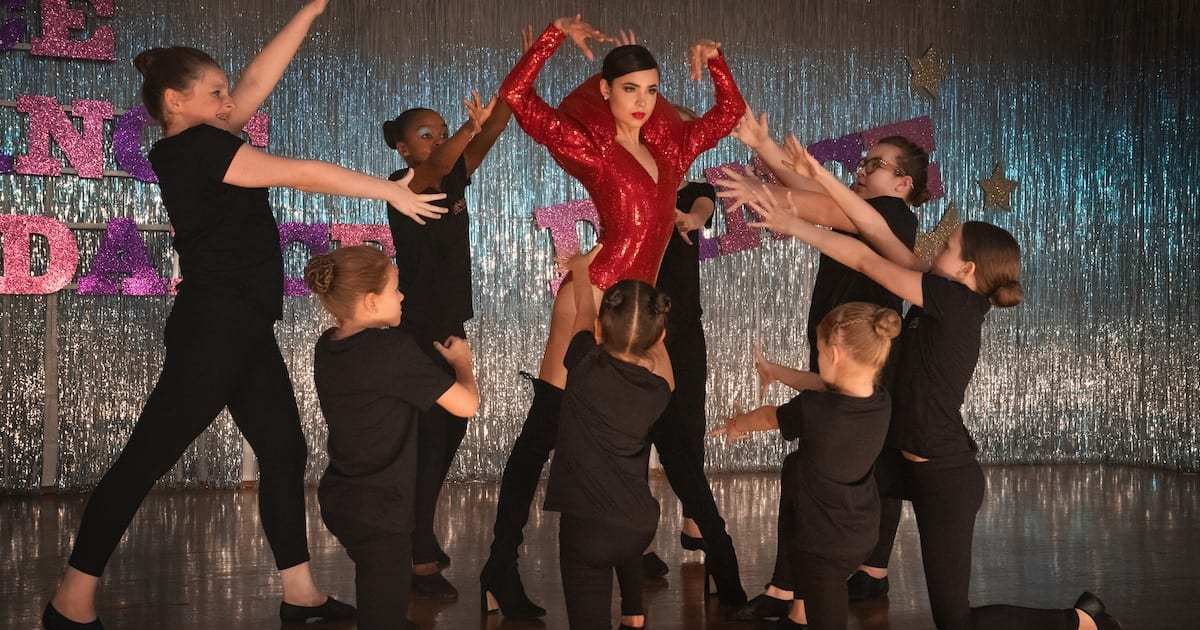 Feel the Beat
Director: Elissa Down

Like any critic from my generation, Siskel and Ebert had a big impact on me. The famous duo is remembered by so many for their heated debates, but to me, what defined them most of all was their love of film and their willingness to go out on a limb and speak up for a movie they liked, consequences be damned. So, in my review of Feel the Beat, I’m going to play the part of both critics and argue with myself over whether this movie is any good. Then I’ll give it a thumbs up, even though I know it makes me look foolish.

April (Sofia Carson of Disney’s Descendents) is a very talented dancer struggling to make it on Broadway, but after she blows a big audition due to some romcom contrivance, a top choreographer gets her banished from the professional dancing scene. This leaves April—or “Ape,” as she is consistently referred to in what has to the most unfortunate choice of nicknames since George Lucas said “Hey, I think ‘Ani’ would be a great thing to call the Dark Lord of the Sith”—with no choice but to slink back to her home town in Wisconsin to stay with her Dad (Enrico Collantoni).

Once she is home, Ape reconnects with her old flame (Wolfgang Novogratz), who is made entirely of wood but dreams of one day becoming a real boy. She also gets a job as a dance coach, and she has her work cut out for her. The awkward young misfit girls that make up the troupe may be unpolished, but if our heroine can get a lead in a movie without being able to act, something tells me that if they can all learn to come together to yadda yadda yadda … you get the idea.

It’s tempting to judge Feel the Beat by the standard of what it could have been: With one strong push in either direction, this could either be a School of Rock–style feel good classic or a horribly made, Hallmark Channel syrup fest. Instead, it hovers somewhere in between, getting a lot of mileage out of being pleasant and cute. I’m going to digress just a moment to explain that I spent most of my 20s teaching theatre to kids, so the formula of the self-involved teacher who learns of the joy of helping children discover their self confidence through the arts is going to hit a bullseye with me if it’s done even marginally well, and Feel the Beat is nothing if not marginally well done.

Carson is a powerhouse dancer, but as an actress she doesn’t have the presence to carry a film. Once you accept that and focus on the moments where she’s almost good, it’s surprisingly easy to forgive her for giving such a bland performance. Moreover, the lovable cast of ragamuffins that surround her manages to lift her up a notch.

Director Elissa Down never rises very far above the basics, but she manages to avoid sinking below them, and screenwriters Michael Armbruster and Shawn Ku (Beautiful Boy) have clearly seen a number of films before and do a passable job at mimicking one here.

Feel the Beat is a completely manufactured product, like Cheese Doodles or Pete Buttigieg. But like both of these examples, if you approach it with realistic expectations, you probably won’t throw up, and if you wipe your fingers on a paper towel, you won’t get greasy orange crumbs on the couch. I’d be lying if I said I didn’t enjoy this movie, but with more effort and inspiration behind it, I would have been able to look people in the eye while doing so. As a cinematic achievement, it’s a bit like a child who is potty training: I applaud the effort, but hope that next time they make it to the toilet. –Patrick Gibbs