00:00 / 16:39
Spotify Stitcher
RSS Feed
Share
Link
Embed
Every person wants to be remembered in some fashion. What Sandoval finagled down a 20-stair or what Burman did on a handrail in Philadelphia won’t be forgotten. The Zero crew stuck to their roots and put together another classic video. Cold War is a must buy for anyone who is into handrails, Minor Threat and skulls. 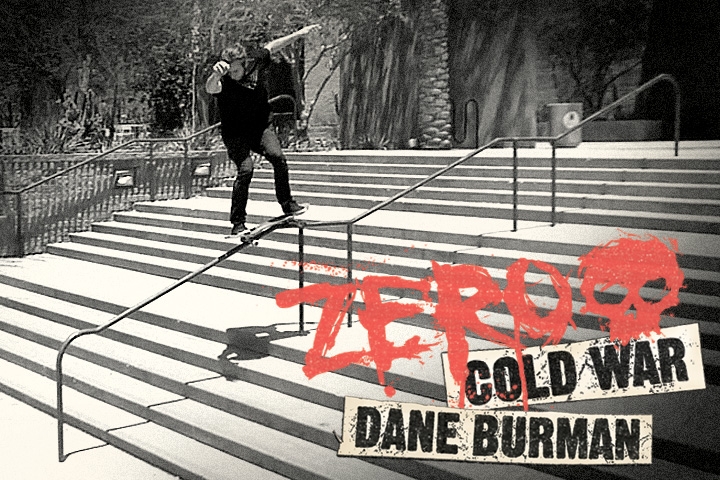 Cold War is the seventh video produced by Zero Skateboards. With multiple pushbacks and team roster changes, the video is finally here. Zero is the creation of Jamie Thomas, who started the company in 1996. Since then, Thomas has branched out to form many different companies under the Black Box Distribution name. Throughout the years, Zero has consistently turned our brains to mush with pure rawness and top-notch filming. With heavy hitters such as Tommy Sandoval and Tony Cervantes, I had the expectation that the video would be an instant classic. Most likely, Cold War will be the final skate video released this year.

The Sony VX1000 is the best camera to film skateboarding with, according to Beagle. It seems that Lannie Rhoades and Mike Gilbert (the main cinematographers) share this opinion, because Cold War is shot mainly on the VX. It is obvious when you see a sequence that was filmed on this camera because it is gritty and has more personality than high definition cameras. The VX quality makes you feel like Cold War was picked out of a stack of dusty VHS tapes from a closet—even if you buy it on iTunes. The VX1000 is an aesthetic medic in the battlefield of high definition and time-lapse photography. I’m glad that Zero is keeping this side of skateboarding alive.

Any video that features a vagrant bombing a hill on the back of a shopping cart is a video I will watch until the end. The intro has the usual montage of slams and hijinx that is expected, but one scene slightly rubbed me the wrong way. Dane Burman face palms some security guard, which is far too disrespectful for me to support—unless Mr. Bean does it.

James Brockman pulls a switch 180 and Tommy Sandoval flicks a frontside flip down the drop that Ragdoll did a melon over in Pig Wood Slaughterhouse. The drop has a landing that is slanted and instantly drops off to a curb—making it seem difficult. Ragdoll’s part has always been a classic in my head. I watched it after I saw Cold War and noticed many similarities to his part and the video. I’m not saying that Zero copied Ragdoll. I’m saying that he was ahead of his time.

As Ragdoll shows us, you don’t have to slap a radio away or put your hand on a security guard’s face in order to get another minute to skate a spot. Simply talk to the security guard like a person and politely flip him off as you roll away after you land your trick. Not every single pair of pants that you own must have a hole in the right knee. Maybe a certain chief could switch it up every now and then—maybe both knees, or even a left might be possible, as shown by Ragdoll. I have to say, James Brockman performed a nose stall to pull-in (or whatever you call it) with ninja style, but I felt that I had seen a nollie-heel variation of this trick before—oh yeah, Ragdoll’s part. A layback slide seems pretty cool, but a layback slide to shuv-it out ends up winning.

If you are taking this too seriously, you should calm down. I’m just talking shit. I feel like people have forgotten about Ragdoll, just because he fell off the face of the earth and has had little coverage in the past years. I feel like it is a good time for a pretentious quote. “Someday soon, perhaps in 40 years, there will be no one alive who has ever known me. That’s when I will be truly dead—when I exist in no one’s memory. I thought a lot about how someone very old is the last living individual to have known some person or cluster of people. When that person dies, the whole cluster dies, too, vanishes from the living memory. I wonder who that person will be for me. Whose death will make me truly dead?” ―Irvin D. Yalom, Love’s Executioner and Other Tales of Psychotherapy

Every person wants to be remembered in some fashion. What Sandoval finagled down a 20-stair or what Burman did on a handrail in Philadelphia won’t be forgotten. The Zero crew stuck to their roots and put together another classic video. Cold War is a must buy for anyone who is into handrails, Minor Threat and skulls. If you want to actually watch it instead of reading this, the video is available on iTunes. The hard copy release will be in shops at the end of November, according to the Zero website. Watch the trailer for Cold war here:

Zero Cold War Trailer from Already Been Done on Vimeo.