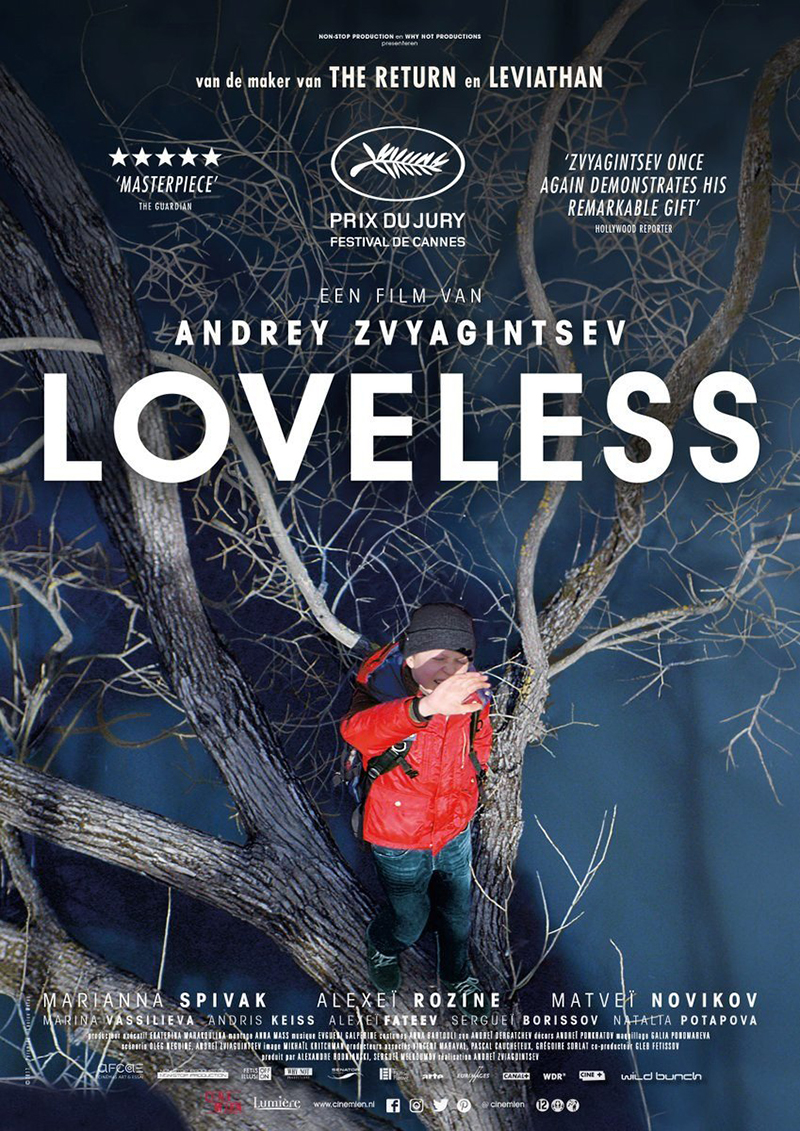 From the director of Gloria and Leviathan comes Loveless, Andrey Zvyagintsev’s bleak depiction, simultaneously brutal and measured, of a failed marriage and fractured family—a lost child and a lost society. Zhenya (Maryana Spivak) and Boris (Aleksey Rozin) are in the midst of divorcing one another and selling their Moscow apartment. It’s a hasty affair: They loathe one another, hardly able to stomach the other’s presence, and they’ve each already moved on to new lives. Zhenya, the more caustically embittered of the two, is seeing a rich, older man who treats her to fine dining, his luxurious apartment and his social status. Boris is taciturn, seeming to move under a perpetual air of defeat and detachment. For his part, he’s dating an eager young woman whom he has already gotten pregnant, and worries about losing his job, should his religious boss find out about his impending divorce. In the background looms an ashen, concrete Russia and the ceaseless, anxiety-inducing stream of news reports.

But left behind by all of this vitriol is Zhenya’s and Boris’ neglected son, Alyosha (Matvey Novikov), a quiet and sensitive 12-year-old boy. He’s been unwanted since he was born—the product of an unplanned pregnancy and a rushed marriage—and he knows it. As his parents spar over who will be stuck with the boy, the baggage, Alyosha hides away, his body and face racked by silent, shattering sobs. We know Alyosha is long lost, but when he finally does disappear, his parents don’t notice until his school calls, days later.

With the help of a group of volunteers, who are more dedicated and efficient than the local police force, Zhenya and Boris search for Alyosha. They scour the ruin and rooms of deserted buildings, the lifeless tree branches of the wintry forest, the home of Zhenya’s acrimonious mother, the merciless morgue. And no, the film isn’t a tale of newfound or reunited love. It’s an unforgiving tale of decay and of derelict, filled with pessimistic dread in each chilling, exacting frame, each slow development. However grim, Zvyagintsev takes the domestic drama and search-and-rescue thriller into a powerful socio-political parable of a contemporary Russia (and beyond), consumed by lovelessness. Toward the end, Zvyagintsev drives the allegory home with a long, head-on look at Zhenya as she runs in place on a treadmill, her white, blue and red tracksuit emblazoned with the word “RUSSIA.” –Kathy Rong Zhou