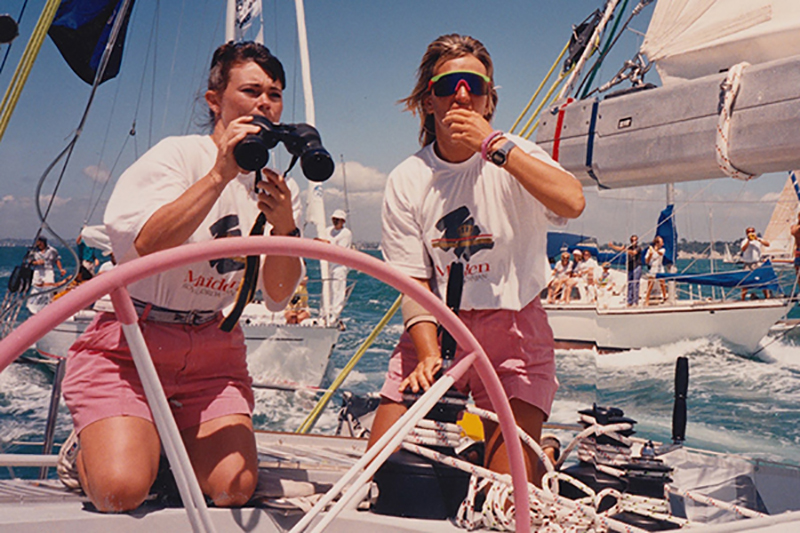 In the continuing trend of documentaries that make history out of the barely recent past is Alex Holmes’ latest feature, Maiden. The film tells the story of Tracy Edwards, a young British woman who assembles the first all-female crew to enter the 1989 edition of the famous Whitbread Round the World Race, a yacht race around the world. Everyone—other sailors, the press, the women’s families—says that a group of women could never accomplish such a feat, and the public resoundingly predicts that the crew won’t even complete the first leg of the race. No spoilers, but they wouldn’t have made a movie about it if Edwards’ boat (itself named Maiden) tanked a couple miles out from shore.

A huge benefit of Holmes’ choice to focus on an event barely 30 years old is that nearly every key player in the Maiden story is still alive and was, apparently, willing to discuss the events. The director knowingly steps back as a narrator or storyteller, allowing Edwards and her crew to provide most of the film’s content. Two of the key players, Edwards and her childhood best friend and crew mate, Jeni Mundi, are featured throughout in both present day and archival footage. Their emotional investment, even after many years, is tangible and provides many relatable moments throughout. Add to this the life-or-death conditions inherent in the treacherous route the sailors take around the world, and Maiden is a constantly thrilling and moving film.

Maiden focuses primarily on the resilience and relentless determination of the women who helmed Edwards’ ship, providing a beautifully uplifting story with many moments of “hell yeah” empowerment. The potential problem of the film’s mindset is that it somewhat unconsciously places too much pressure and labor on the women themselves. Many of the men who shamed and mocked Edwards and her crew are interviewed—again, in both contemporary and archival interviews—and their responses are consistently on the defensive and the reactionary. Comments abound of “They’ll never do it” in the ’80s and, in the present day, “They were women—nobody believed in them!” or “I’m sure I said a bunch of terrible things, but who didn’t?” There’s not much in the way of analyzing why people spoke and speak these things, or holding them accountable.

Maiden posits that it’s through strong women like Edwards and her crew that we fight the long and steady fight toward equality. This is true, and the more directors and other artists choose to highlight stories like these, the better—at the end of the day, Edwards is a wildly inspirational figure more than deserving of this historicization. At the same time—because it’s equally important that men stop being so damn shitty—further deconstruction of the toxic masculinity that Edwards and her team faced would also have been warranted. This film relishes in the tension and the adrenaline of its core gendered battle, but misses out on an opportunity to critique not only the language of dominance but its core ideologies and practices. Without Tracy Edwards, there would arguably be significantly less opportunities for women to break into the world of sailing. Without the harmful and dangerous attitudes of her competitors and detractors, there’d be no need for a movie like this. –Audrey Lockie