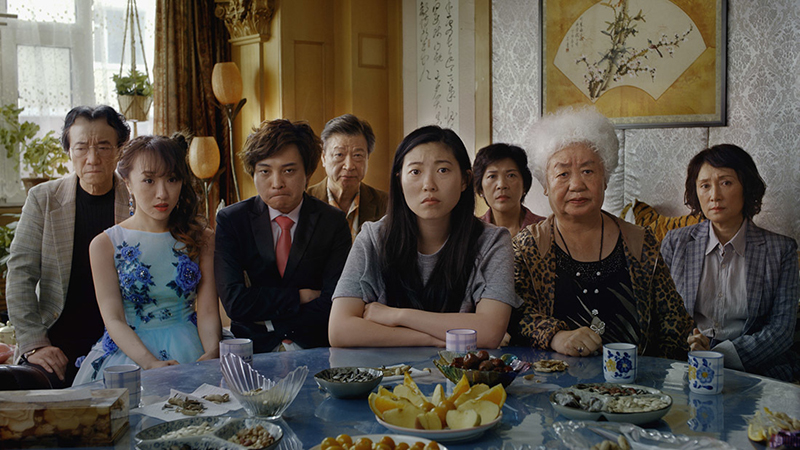 When Lulu Wang’s family found out that her beloved Nai Nai had terminal lung cancer, they didn’t tell Nai Nai. Instead, they decided to shield her from—and collectively shoulder themselves—the pain, grief, fear and anxiety of only having a few months left to live. Needing an excuse to gather everyone together to celebrate (and secretly bid farewell to) Nai Nai, the family made hasty plans for an exuberant wedding.

This “actual lie” became the basis of Wang’s 2016 This American Life segment and is now the close premise of her second feature film, The Farewell. Played by Awkwafina, Billi is in her 30s, was recently denied a Guggenheim Fellowship, and can’t make rent on her Bushwick apartment. While doing laundry at her parents’ (Tzi Ma and Diana Lin) home, she finds out about Nai Nai’s (Shuzhen Zhao) diagnosis, along with the plan to throw a wedding for Billi’s cousin Hao Hao (Han Chen) and his girlfriend, Aiko (Aoi Mizuhara), who live in Japan and have been dating for all of three months. Despite being discouraged from joining them in China (her parents worry she can’t keep up the ruse), a sorrowful and bewildered Billi buys a ticket to Changchun, returning to the place she and her parents left when she was 6.

Reeling, Billi finds herself back in the arms of Nai Nai, who herself is spirited as ever, delighted and bustling over wedding preparations. The rest of the family toils on the interior, hiding their heartache. Backdropped by the muted pastel palettes of its uniform apartment buildings, Billi takes in a hometown that even her Nai Nai doesn’t recognize anymore. She traipses from one family banquet to the next, and in her fluent but stilted, limited-vocabulary Mandarin, Billi fields the mostly harmless but weighty, sometimes longing questions about life in America compared to China: “Shì bù tóng,” she says. “They’re different.”

The Farewell is embedded in a melancholic push-pull of mourning, nostalgia and outsiderness, but of course, it’s readily and incisively funny, too (it’s about family, after all). Wang tells her story with compassion and fidelity, and her knack for capturing the truths of real life and real people also extends to their fictions, romances and fantasies. Wang and cinematographer Anna Solano’s people-filled visual arrangements, along with the cast’s superb performances, result in some hilarious, some absurd and some true-to-life scenes: a visit to Billi’s grandfather’s grave; the bride and groom’s bumbling, fairytale photoshoot, not to mention the wedding itself; the city’s giant rainbow arch, mantled amid Changchun’s far-reaching construction sites.

When Billi isn’t alone, she’s surrounded by family. She joins Nai Nai for her punchy morning exercises. Through tears, she and her mother talk about the ripped-out-from-under-you feeling of moving to America. She hangs out with the forthright aunties, the family dog, Ellen, and Nai Nai’s caring younger sister, Hong Lu (the latter two are Wang’s real-life family, playing themselves). Every ensemble shot asserts what Billi’s uncle (the excellent Yongbo Jiang) chides when she questions the family lie: “You think one’s life belongs to oneself,” he says. “But that’s the difference between the East and the West. In the East, a person’s life is part of a whole.”

Billi remains torn, conflicted in her family’s homeland and by their deception, grappling with the possible loss of her Nai Nai. In Wang’s loving, triumphant Farewell, Billi might never truly belong to any one place, but she does discover—or relearn, or expand upon—the joy and embrace of belonging to one another, however that might be. –Kathy Rong Zhou