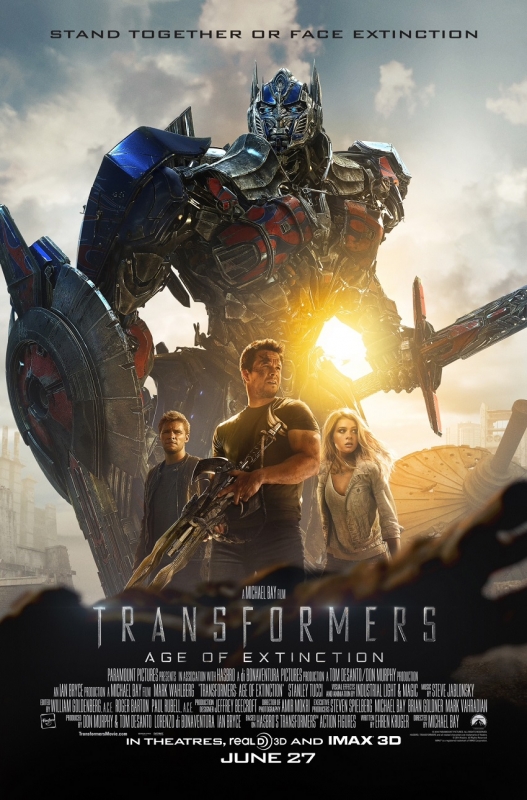 The war between Michael Bay and film critics has been active since the release of his second chapter to the live-action toy franchise, 2009’s Transformers: Revenge of the Fallen, where many individuals, myself included, deemed the project a failure as well as racist. To this day, I still stand by my words. Five years later, the paint-by-numbers Hollywood director continues to believe his robotic adventures are worthy of praise yet forgets what subject matter these films need to observe—the robots! Since there are obnoxious amounts of storylines crammed into this 165-minute chaotic mess (that’s right, 15 minutes shy of three hours), I’ll offer the gist of things.

In 2011’s Transformers: Dark of the Moon, Chicago was obliterated in a massive war between the Autobots and Decepticons. Now, the C.I.A., led by Harold Attinger (Kelsey Grammer), has set out on a mission to eliminate all alien life forms, good or evil. Attempting to avoid detection, a battle damaged Optimus Prime finds himself in the care of failed inventor, Cade Yeager (Mark Wahlberg) and his daughter, Tessa (Nicola Peltz). However, when his location is identified, the group must fight to survive capture from the government while also dealing with Lockdown, a mercenary robotic bounty hunter. You would think after four endeavors, Bay would learn from his mistakes, put more emphasis on the characters that are mentioned in the title and stop wasting time on character development that is utterly uninteresting, but such is not the case. Even Ehren Kruger’s dialogue sparks laughter where there should be only tension, but with dialogue such as “My face is my warrant,” one can only shake with glee.

Not only does Bay, once again, include dialogue that can be construed as discriminatory, he also actually tries to justify a 20-year-old character sleeping with an underage minor by discussing the “Romeo and Juliet” law. He actually captures a close-up shot of a card the mentioned 20-year-old carries in his wallet at all times that states the law’s specifications!!! Are you kidding me? It’s clear to me Bay is surrounded by yes men who are too afraid to contradict the absurdity that is spewing from this once fun filmmaker’s mind. In my first time as a professional critic, I had to step outside the theater for two minutes due to the shaky camera action sequences. Honestly, this is one of the worst films I have ever seen. So much so when I finally made it home after enduring three hours of nauseating Bay-ness, the sensation to vomit was met by me immediately bowing to the porcelain god and letting it rip.

That’s right, folks. Transformers: Age of Extinction made me puke. I hope that quote makes it on the covers for the Blu-ray and DVDs.