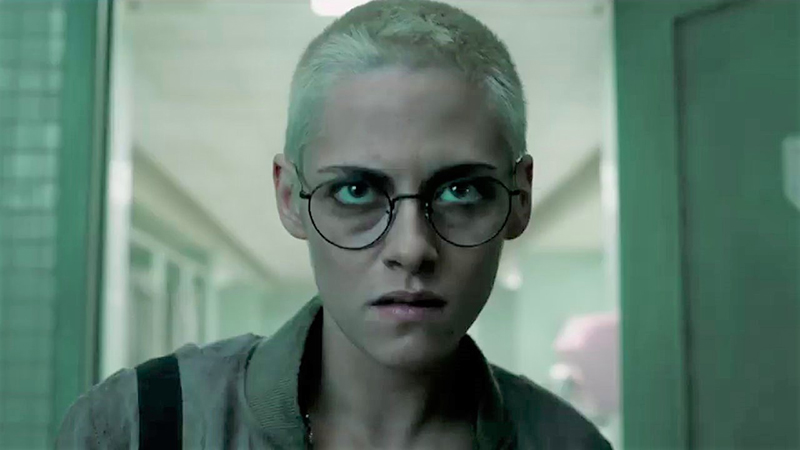 When I was about 14, I once convinced a gullible friend that James Cameron was making a sequel to The Abyss, and that it would be called Son of Abyss. That story may not be entirely relevant, but I like having an excuse to tell it.

When Cameron’s underwater sci-fi epic came out 30 years ago, the plot was kept under wraps, and there was a rush of quickie rip-offs (Leviathan, Deep Star Six) that just assumed that the movie was going to be Aliens set under the sea. Now, for some reason, in 2020, we get another one of those films, cleverly titled Underwater.

Nora Price (Kristen Stewart) is one of a group of researchers aboard a lab located eleven thousand meters under the ocean. Nora—who has a bleached-blond buzz cut and glasses so we’ll know that she’s both a badass and a scientist—is brushing her teeth and doing melodramatic voiceover narration (which would be a hell of a ventriloquist routine) when an earthquake destroys the large vessel. The surviving members of the team are forced to get into depth suits and walk deep beneath the sea, with limited oxygen, to a nearby vessel. Along the way, the encounter a strange creature that looks remarkably like a testicle with tentacles feasting on a dead human body. Naturally, they decide to take it with them.

There a few good jump-scares in the first half, and the pacing is tight enough, but to call this film uninspired is to be quite charitable. The cast is solid, with Stewart doing her level best to be Sigourney Weaver. However, the script isn’t doing her any favors, as is demonstrated by this immortal dialogue exchange in one of the film’s more dramatic moments:

Director William Eubank (The Signal) handles the visuals well enough with the help of veteran cinematographer Bojan Bazzeli, but the film is really just 95 minutes of “Shit! What is it? Shit! SHIT! AHHHH!?” and people running down corridors, getting pulled under water, imploding, making serious faces and saying  “it’s some sort of thing.” Then Kristen strips down to her underwear again—which is, admittedly, better than when TJ Miller does it—and it just becomes a bit of an ordeal to sit through, even at the mercifully short runtime.

Underwater has been sitting on the shelf for a year and a half, and its release feels more like a formality than anything else.