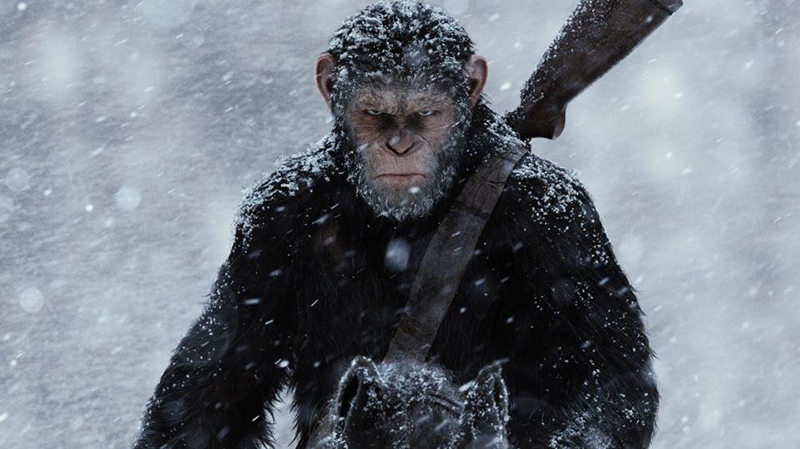 Film Review: War for the Planet of the Apes

War for the Planet of the Apes
Director: Matt Reeves

It’s hard to believe this trilogy that started with director Rupert Wyatt and concluded with Matt Reeves’ second and third installments began six years ago. We started the saga with Will Rodman (James Franco) and his infant ape, Caesar (Andy Serkis), developing a concoction proposed to assist with brain repair and continued too the second chapter with the ousted apes fending for themselves as their intelligence expands further than any human ever anticipated. In this final chapter, all bets are off as the human race makes a final stance to ruin Caesar’s army and accomplishments by wiping them off the planet forever. While the leader wants nothing to do with their war and live with his own kind peacefully in seclusion, everything changes after Woody Harrelson (only known as “The Colonel”) murders Caesar’s wife and baby son. In the aftermath, Caesar and his closest commandants journey to discover where the rest of his tribe have been taken and learn much on the way after discovering an orphaned mute human child. Reeves offers an extremely directionally stylized account, almost too styled at various points, with exceptionally long cuts and cross-dissolves to inflict an array of emotions for audiences. As for Serkis, it’s finally time for the Academy Awards to consider motion-capture actors for nominations. I know it’s only August, but the respect is rightfully deserved. For Harrelson who has been working for decades, this is by far one of his best and most sinister performances. He is absolutely merciless. The film is a great, yet not perfect, end to the journey. It needs to be 30 minutes shorter, so get ready for a long theater visit. On a side note (only because I have been asked by several individuals), if witnessing animals (even CGI ones) being shot horrifies you, you may want to watch Spider-Man instead. You have been warned. –Jimmy Martin