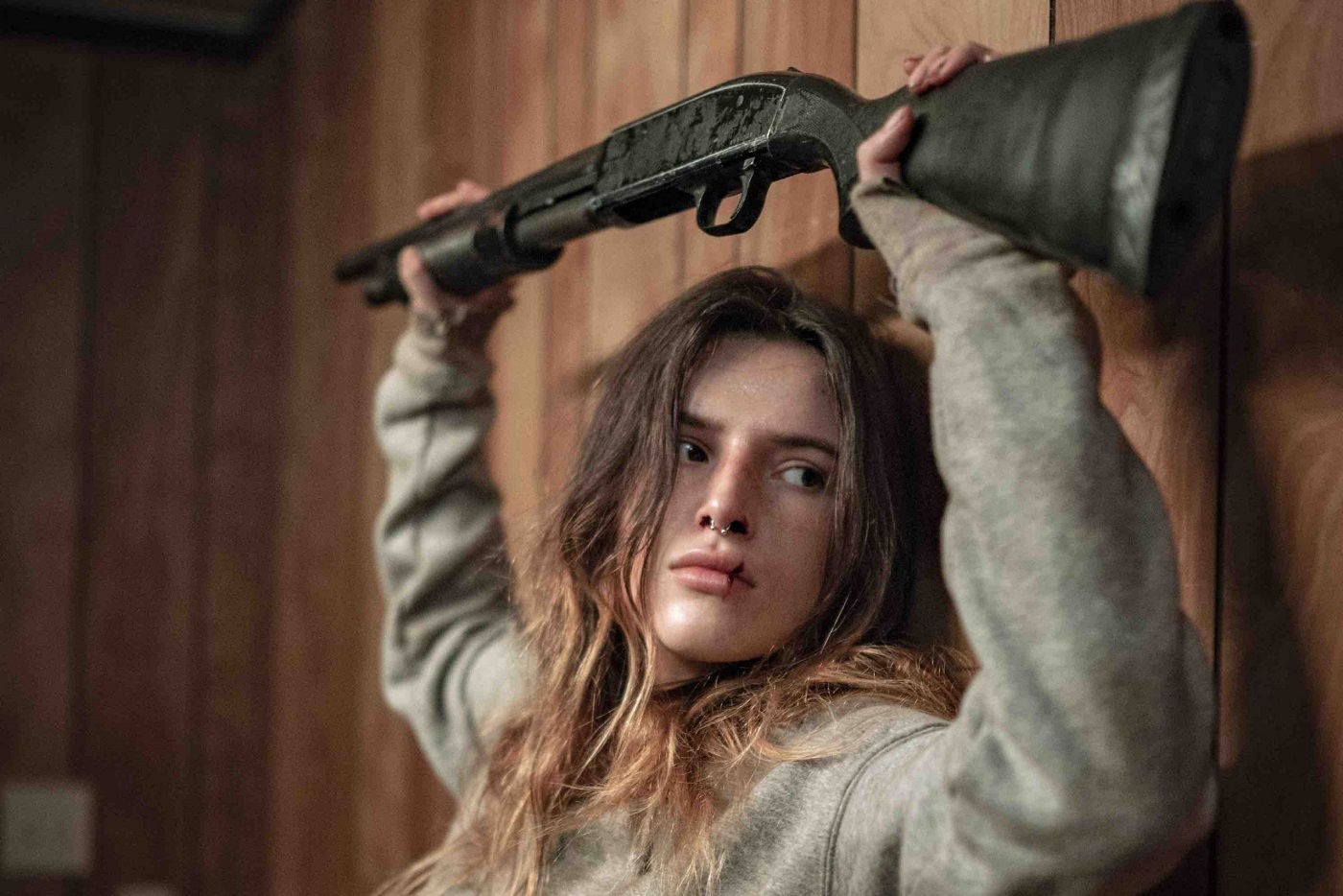 Trilight and Envision Media Arts
In Theaters: 11.20
Streaming on Video on Demand: 11.24

I always feel the need to be clear when discussing the subject of seeing movies in theaters at present—I don’t do it, and I frankly don’t think anyone should unless they live an area where COVID-19 cases are very low and they’re willing to go through all of the proper precautions. That being said, I love the moviegoing experience with all my heart. Movie theaters are my happy place, and I stress out about the future of these magical realms that can take us journeys to anywhere, because a world without them would be a bleak place to live. And then a movie like Girl comes around and makes me question whether there is any value to film as a medium at all.

Bella Thorne, former Disney Channel star turned internet pariah, stars as the title character in this insipid thriller about a young woman who travels to a small town in Texas with hatchet in hand in order to kill her estranged father, only to discover that someone else beat her to it. She finds the man she called “Daddy” chained up in a shed, having been tortured to death. So, after saying her goodbyes by kicking the corpse a few times, she heads off on a quest to find whoever did it so she can kill them instead—because this is a revenge thriller, and you gotta kill somebody.

She seeks out the local Sheriff (Mickey Rourke) to see what he knows, and gets repeated warnings from everyone in town to steer clear of “The Brothers.” She then takes her hatchet and her clothes and heads to the local laundromat, where she stands around wearing only jeans and a jacket (God forbid she button it up, that’s what a person would do), and she’s approached by the town inbred stalker jackass, whom she met earlier in a bar. He offers to let her touch his knife, she lets him touch her hatchet, and from there things get just plain too stupid to even write about.

Writer-Director Chad Faust has very considerately cast himself in a major role, which allows you to picture a specific face as you rock back and forth in the fetal position murmuring “I hate the person that made this movie.” There’s a certain irony in the director’s last name, as it is so easy to assume he must have made a deal with the devil to get this feature debut made. But what he lacks in skill and imagination he makes up for with his razor-sharp dialogue, such as: “Who went without so you could have your fruit loops and your spaghetti and your fuckin’ chicken thighs?” and Thorne’s soul-searching, Hamlet-like declaration that “My whole life is one big ol’ thing of bullshit!”

Thorne, whose character is never identified by name (aside: can we please all agree that this pretentious gimmick has worn out its welcome and move on?), goes through the whole film either doing a very bad, mumbly trailer trash accent, or she’s just had her wisdom teeth removed—I haven’t figured out which. Due to budget constraints, the movie provides her with only two facial expressions: Doped-up department store mannequin and petulant, teen-clothing section department store mannequin throwing a tantrum. Meanwhile, Rourke looks like Sloth from The Goonies doing a cosplay mash-up of Steven Tyler and Roscoe from The Dukes of Hazzard, but in perhaps the most infuriating element of the film, he’s still pretty good even though he’s just phoning it in.

This lurid, pulpy and shockingly lazy exploitation flick may be the most utterly flimsy and inept attempt to make something with a Quentin Tarantino– or Robert Rodriguez–style celebration of schlocky ’70s grindhouse cinema of the past 10 years, which is another way of saying it has already developed a following and it hasn’t even been released yet. Girl ranks among the worst films I’ve seen in 2020, and as much as I’d love to see it go away quickly, I can’t shake the feeling that it’s going to be the next Boondock Saints, because it’s just that stupid and phony. –Patrick Gibbs