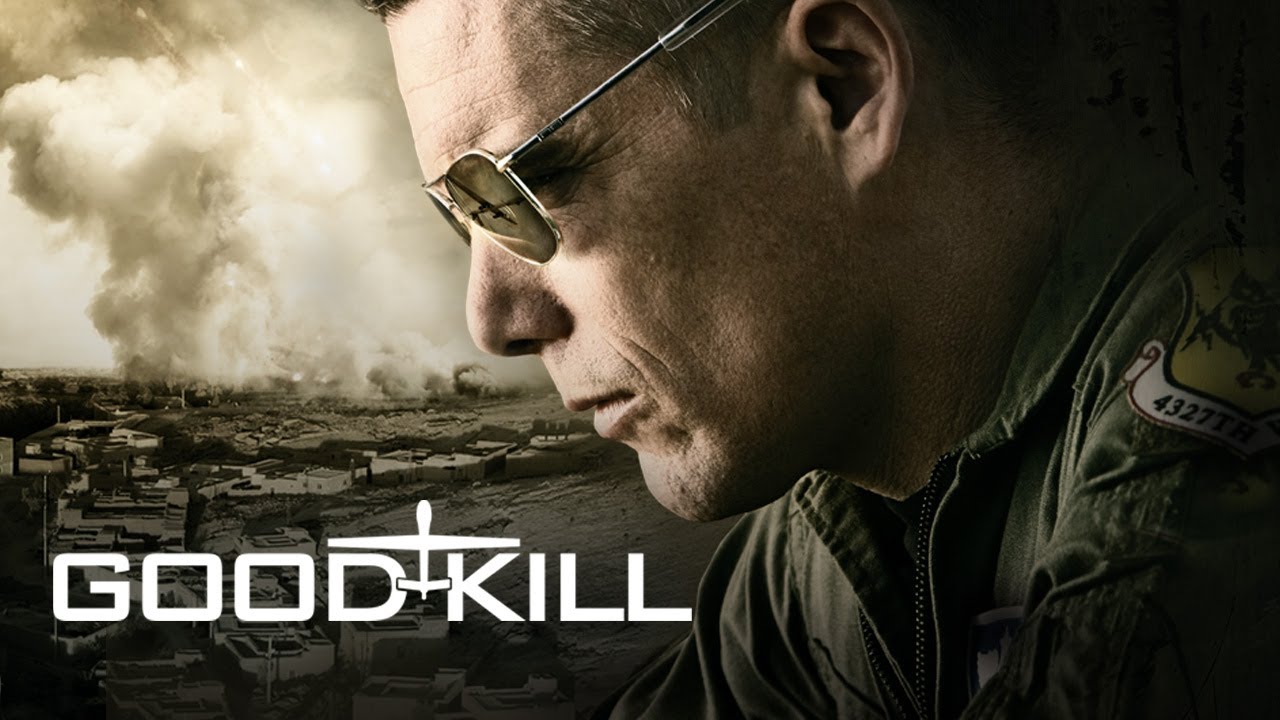 I remember watching Top Gun as a kid. Seeing Maverick and Goose fire up their F-14’s with Kenny Loggins blaring in the background associated a kind of romanticism with fighter pilots that always stuck with me. Good Kill paints a picture of what Maverick and Goose would likely be doing in today’s airforce—and it ain’t that romantic.

Tommy Egan (Ethan Hawke) is an F-16 pilot that gets reassigned to piloting drones in Las Vegas. Used to the risks of mid-air combat, the job starts to eat away at him since he’s blowing the shit out of Afghanistan from within a comfortable station half a world away. The ramifications of his daily routine also start to bleed into his marriage with Molly (January Jones), who starts seeing him as a shadow of the man he once was. Things become more complicated when their unit is turned over to CIA operatives who operate under a less rigid set of guidelines than those of the military. It’s a plot that would be in danger of coming across as preachy, anti-war drivel, but writer/director Andrew Niccol tells a realistic story in Good Kill that illustrates an ethically challenging scenario and its impact on those involved. Each member of Egan’s flight team brings a different perspective to each mission, making it difficult to see the concept of drone warfare in black and white. Good Kill explores similar territory to that of American Sniper. We see characters grappling with the ethics of war along with the psychological toll that it takes on our soldiers. Since Egan is dishing out death and destruction without putting himself in the harm’s way, however, his struggle with reconciliation is different. It’s a role that Hawke performs well—his surface-level cool that he dons for his friends and family hints at a rat’s nest of complicated morality questions that lurk just below the surface. Egan’s new co-pilot Vera Suarez (Zoë Kravitz) provides the moral conscience for their little team, and her chemistry with Hawke helps the film explore their unique perspectives in a morally ambiguous career.

As Good Kill relies heavily on the bird’s-eye-view perspective of combat drones, Amir Mokri’s stellar cinematography is front and center. It’s one of those films that makes the viewer grateful for Blu-ray as Mokri captures the neon resplendence of Las Vegas only to juxtapose it with the war-torn boroughs of Kabul. Something about seeing the familiarity of suburban Nevada from the same perspective as the drones that are decimating Afghani cities makes the audience feel uncomfortable for the right reasons. Drawing this comparison between our home and the homes of the Afghani people makes the audience realize that it would be pretty damn terrifying if we were up against an enemy that could level a building from thousands of miles away.

While it’s beautiful to watch on Blu-ray, the home copy of Good Kill is sparse in the way of special features. The one documentary on the making of the film is a decent look at the behind-the-scenes world of the film, and it’s always insightful to get the actors and director to weigh in on their creative process. Hawke has worked with Niccol before, and it’s fun to see when an actor and director hit that artistic sweet spot. Niccol’s attention to detail was impressive; he hired two air force consultants who made sure that the sets and props were as accurate as possible.

All in all, Good Kill is a solid, thought-provoking film that unfolds beautifully on Blu-ray. Hawke and Kravitz make us feel every pull of the trigger, and the story offers a balanced look at the state of drone warfare. It’s a hell of a lot different than the days of Maverick and Goose, that’s for sure.