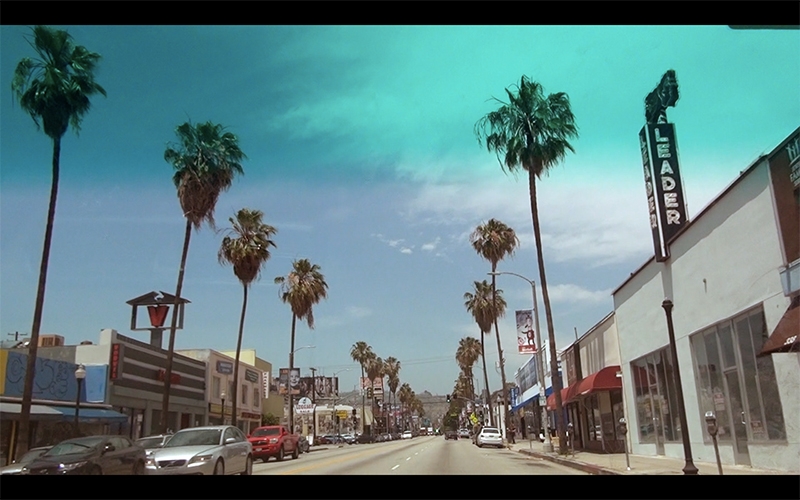 Directed by Nickolas Dylan Rossi, Heaven Adores You is a muted celebration of the life and music of Elliott Smith. As a documentary, the film isn’t particularly unconventional. It comprises archival footage and nostalgic, sometimes teary-eyed accounts by those who were close to Smith and had worked with him, and it’s organized chronologically, from each of Smith’s projects or albums to the next, starting from his high school bands—Stranger Than Fiction and A Murder of Crows—and going up to the posthumously released From a Basement on the Hill. The film stands apart, however, as a respectful tribute to Smith and its incorporation of visual cues, which provide a meditative and aesthetic context for Smith’s life and music.
Throughout, the film heavily emphasizes the bleak beauty of the cities where Smith dwelled—Portland, New York, Los Angeles—while capturing a loneliness and quiet devastation throughout. The scenes never feel aimless by any means, but instead provide gentle and necessary glimpses into the romance and fragility that surrounded Smith. Rather than oversaturating with old footage or photographs, Rossi largely overlays audio—music, interviews, live performances—onto scenes of the places Smith dwelled in and knew. It’s a powerful documentation that is respectful of Smith: After all, Smith is quoted in the film, saying that he’ll do the touring and interviewing to continue doing what he really loved—writing and recording. One particularly poignant moment in the film, for example, features dreamlike footage along a highway into Portland as a radio interviewer asks Smith why he decided to move from his Dallas hometown to Portland in the first place. Smith freezes for several seconds before saying, “Let’s not get into that.”
While some of the most exciting points of the film are culled from jokes on tour, grainy performance footage or photographs of a young Smith, the real revelations—and joy—are left, appropriately, for the music. There’s a lively discussion of Portland’s thriving music scene in the 1990s—hardcore and then post-punk each make their rounds, and Smith eventually leaves his band, Heatmiser, to pursue his own sound. Narrated by musicians, record studio owners and managers, we see porch-side shows and loudly designed concert posters. Mark Flanagan and Jon Brion remember how baffled they felt when they first heard the haunting “Waltz #1,” and we get some insight into the behind-the-scenes of Smith’s music videos: Ross Harris (“Coming Up Roses,” “Miss Misery”) talks Smith, mid-shoot, wanting to dye his hair green or purple; Autumn de Wilde (“Son of Sam”) talks about the now-iconic Figure 8 mural. There are startling moments that shine brightly, too: One friend recounts meeting with Smith in a bar and watching him put $40 into the jukebox, fiercely committing to take over that night’s music.
The film prides itself as a tribute to Smith that prizes his art over his life. Although the film starts off with a grim, foreboding interview—in which the soft-spoken Smith admits that he isn’t cut out for fame—the film steers clear of the fraught tragedy narrative that looms over Smith’s legacy. His girlfriend at the time of his death, Jennifer Chirba, is noticeably left out of the film, and Smith’s relationship with his stepfather and issues with substance abuse are mentioned, but never explored further. It’s a noble endeavor on director Nickolas Rossi’s part, but it becomes an issue as nearly every talking head alludes to the darkness in Smith’s life—their eyes grow distant and their voices imply a sense of regret, remembering interventions, losing contact with Smith, no longer recognizing who he was. By gingerly handling and distancing itself from Smith’s personal life—even if out of respect for the artist—the film piques (but never satiates) the audience’s interest, and results in a one-dimensional diagnosis of Smith’s sudden rise to fame (after performing the Oscar-nominated “Miss Misery” at the 70th Academy Awards) as the beginning of the end.Heaven Adores You doesn’t shed new insight into what drove Smith as an artist and a human being, but it doesn’t seek to join the countless narratives that try to delve into Smith’s mind, either. Rather, the documentary is reverential—and unabashedly so—as it skims delicately over Smith’s illustrious musical career and provides a series of deeply felt and subtle but impactful vignettes. As a capsule of Elliott Smith, this film is effective—for fans and otherwise—as an appropriate, moving and surprisingly artful portrayal of a man and his art.
You can catch a screening of Heaven Adores You on July 7 at the Utah Film Center.
Photos: