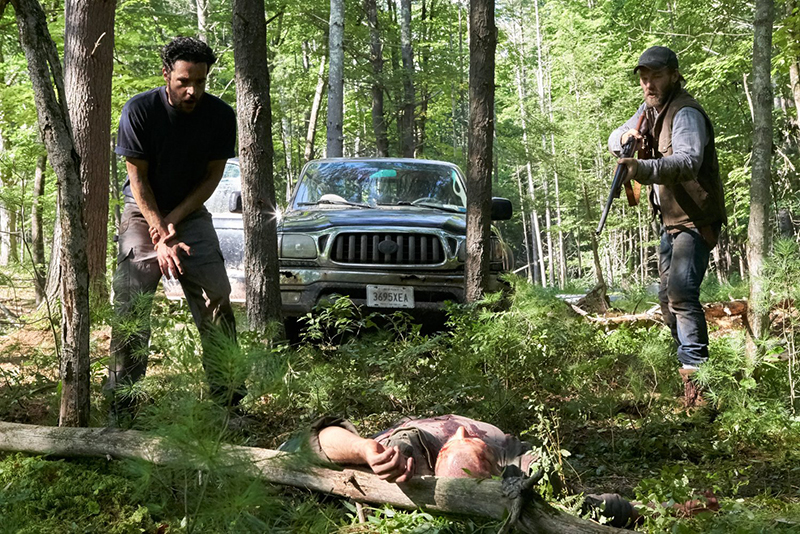 Movie Review: It Comes At Night

In Battle Royale, Koushun Takami’s hyper-violent novel about a group of teens forced into killing each other, the author writes, “Loving someone always requires you to not love others.” This is the concept that permeates It Comes at Night, Trey Edward Shults’ meditation on isolation, family and survival. It Comes at Night is a solid, tightly wound thriller that can’t help but find itself in the same post-apocalyptic pool as The Walking Dead—the deep end of that pool, anyway.

We don’t get much context from the beginning as we see an isolated family dispatch a relative who has apparently contracted a very terminal and very contagious disease. All we really know is that Paul (Joel Edgerton), the family patriarch, is the one who makes the tough calls for his family. When Paul, his wife Sarah (Carmen Ejogo) and his son Travis (Kelvin Harrison, Jr.) meet another father named Will (Christopher Abbott), they ultimately face the moral quandary that anyone in a post-apocalyptic wilderness has to face—do they welcome this family at the risk of their own safety? Or do they give them a few cans of ravioli and send them on their way?

As the kind of film that doesn’t boast a large ensemble, It Comes at Night leans heavily on its cast. It’s a film about fathers and the responsibilities that they place upon themselves, which is precisely the type of setup that Joel Edgerton absolutely crushes. From the moment we look into Paul’s eyes, we know that he’s seen some horrible things, and he doesn’t want those things coming after his family. Abbott plays well off of Edgerton—Will’s youth and unpredictability clashes nicely with Paul’s by-the-book personality. Kelvin Harrison, Jr. throws down an unexpectedly powerful performance as a son on the verge of manhood, trying to abandon his need for a father by forging his own ideologies in the desolate world that they occupy.

Since It Comes At Night is so focused on fathers and sons, it doesn’t leave Carmen Ejogo and Riley Keough, who plays Will’s wife Kim, with a much to do outside of looking freaked out. Keough does share a few lighter scenes with Harrison, in which Travis sees Kim through the eyes of a young, heterosexual man who hasn’t seen a woman other than his mother in who knows how long. Again, the film does a great job of capturing a sense of the primal maleness that lurk beneath the veneer of our fathers and sons, but that’s a tale that tends to simplify the roles of its female cast.

Atmospherically, It Comes at Night is as good as wilderness survival flicks get. It’s shot against a beautiful, lonely forest, and the cinematography of the film’s more visceral moments is authentically grisly. However, after dwelling on the film’s not-so-happy ending while the credits rolled, I couldn’t help but feel a little disoriented by the film’s title and staging. It Comes at Night definitely works as a horror film, but its sub-genres get a little crossed—like going to an Italian restaurant that only serves pad thai. You’re still glad you came, but your end result didn’t pan out in the way that you were led to believe that it would. –Alex Springer