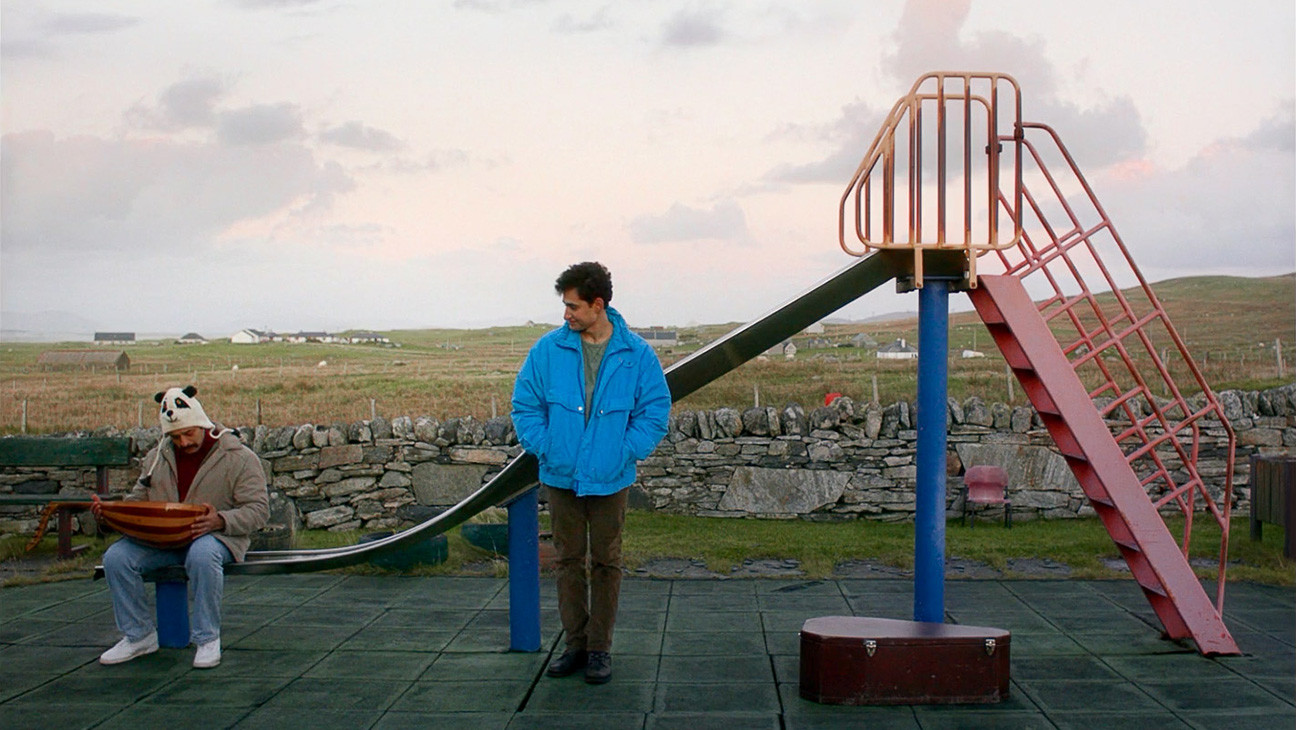 I love a good, giant-sized blockbuster, and I’m still on a high from Godzilla vs. Kong. But sometimes, the smallest films can be the most rewarding. Limbo, the feature debut from writer-director Ben Sharrock, is one of the most rewarding to be released so far this year.

Limbo follows Omar (Amir El-Masry, Tom Clancy’s Jack Ryan, Star Wars: The Rise of Skywalker), a Syrian refugee stuck in exile on a remote Scottish island while he waits for the British government to grant him asylum, along with three other refugees. There’s Farhad (Vikash Bhai, Hanna, McMafia), an Afghani man who has a strange preoccupation with chickens, as well as Wasef (Ola Orebiyi, Cherry) and Abedi (Kwabena Ansah, Enterprice), two brothers from West Africa who are constantly bickering and belittling each other. The four of them live together in a small apartment, take citizenship classes and try to learn about life in the west by binge-watching episodes of Friends.

Omar is skilled at playing the oud, and carries one passed down to him from his grandfather, though he never plays it, seeing no point and feeling too much depression and anxiety over the uncertainty of the future. Poor phone service makes it difficult to communicate with his parents back home, who want to him to make peace with his brother Nabil (Kais Nashif, Paradise Now, Body of Lies), who stayed behind to fight in the war and who disapproves of Omar’s choice. Omar must try to keep his sanity in an insane world and hold onto hope that there is a future waiting somewhere at the end of a troubled past and seemingly endless present.

Limbo is as delightfully funny as it is quietly melancholy, capturing the intense frustration of the situation these men find themselves stuck in with wit, charm and empathy. El-Masry is terrific as Omar. By all rights, he has a future as a leading man, but it is Bhai’s performance as the almost Krameresque Farhad, who is a far deeper and more complicated person than he seems to be—that is the real standout, and he’s a gloriously endearing character. Sidse Babett Knudsen (Westworld, Inferno) and Kenneth Collard (Cuckoo) are brilliant as Helga and Boris, respectively, the citizenship class instructors, with hysterically offbeat characterizations that seem to owe a bit to the works of Christopher Guest.

The surreal nature of Omar’s maddening existence in this place allows the characters to add humor without ever getting too broad. Sharrock’s script is sharp and insightful, and he writes great dialogue without falling so in love with his own writing that he forgets to let the moments of silence speak for themselves. Ansah and Nashif get arguably the biggest laugh in the movie, as well as some of its most sobering moments.

Limbo is a wonderful and touching little film, and at a time when lack of sympathy for immigrants and refugees who are just looking for a safer, better existence is a such a fever pitch. Its delicate walk on the lines between warmth and sadness, comedy and tragedy and, most of all, hope and despair, is an expertly performed balancing act that’s poignant and much needed. It makes for one of 2021’s first must see films for the serious and thoughtful cinephile. –Patrick Gibbs