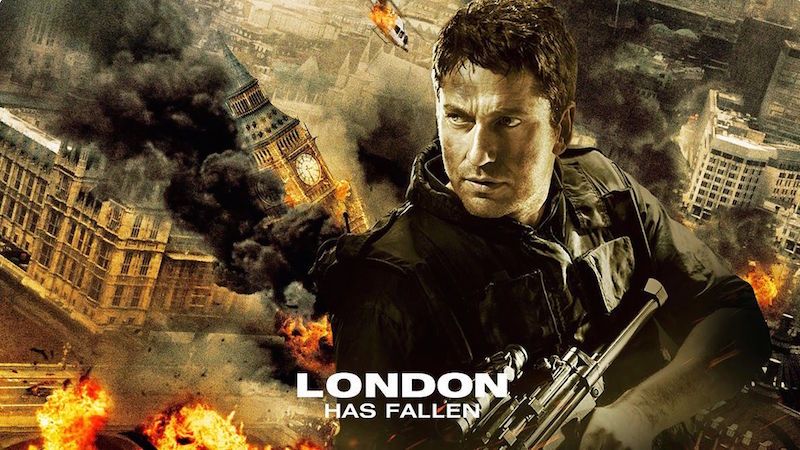 Three years ago, director Antoine Fuqua and Gerard Butler surprised the masses with Olympus Has Fallen, the White House–takeover shoot-’em-up, so this critic was excited about the follow-up that takes place across the pond. However, once it was revealed that Fuqua refused to direct this sequel because he didn’t like the script, director Fredrik Bond left due to creative differences, and the original release date was in October 2015, my critic sense started tingling, and my hopes diminished. My instincts were correct. Set three years after the original, Mike Banning (Butler) is still the head of security for President Benjamin Asher (Aaron Eckhart), and the two are headed to The Big Smoke to attend the Prime Minister’s funeral. Obviously, the whole service is a trap set by a terrorist group, and the gunfire and explosions start to rock the entire city. Thus, it’s a race to make it out of the city alive. All of the charm and clever one-liners of the first film are missing in action during this production. There must have been a seven-inch layer of dust covering the pages of this idiotic screenplay, as the majority of the jokes are straight out of 1993. Also, it took six writers to come up with the original “my wife is pregnant, so I hope I make it home” concept and the “this is my last mission” notion. Honestly, six people. The one positive aspect comes from the grand finale, which comes in the form of a 20-minute gunfight that uses unique camera angles and creative fight sequences. However, the scene concludes with a building explosion large enough to wipe out four city blocks with no survivors. Unfortunately, such is not the case, and it appears that we can look forward to another misadventure with these senseless characters. –Jimmy Martin