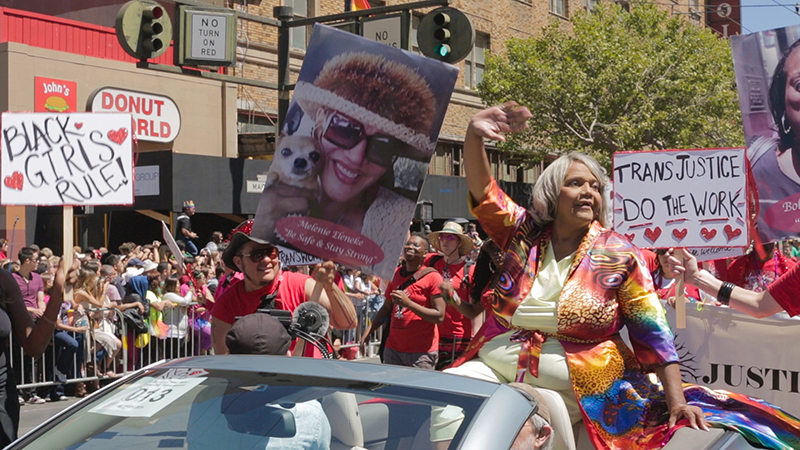 “When the dust settles, I want a whole bunch of transgender girls to stand up and say, ‘I’m still fucking here,’” declares Miss Major Griffin-Gracy, a fearless, formerly incarcerated, black trans elder activist and beloved community leader. Now in her 70s, Miss Major has, for over 40 years, tirelessly advocated for the rights of transgender women of color—for many, she’s known simply as “Mama.”

In her biographical doc, MAJOR!, director Annalise Ophelian celebrates the immense life and history of Miss Major. Where to begin? Miss Major is a veteran of New York City’s Stonewall riots, became politicized in prison after the 1971 Attica Uprising and served as executive director of the Transgender, Gender Variant and Intersex Justice Project (TGIJP) for a decade. In the film, stories of Miss Major, told by herself and her girls, craft an intimate, astonishing and radical portrait of Miss Major’s enduring legacy. Miss Major shares her memories of being expelled from two different colleges for wearing dresses, living in New York in the ’60s and honoring the memories of trans girls whose lives were cut too short. Just as powerful are the stories of Miss Major’s “daughters.” For many, Miss Major was their sole source of unconditional love, support and guidance at a time when they were trying to put the pieces of their life back together after incarceration, after being rejected by their families, after being denied drug and alcohol treatment programs unless they agreed not to be a woman.

Mirroring Miss Major’s life and activism, MAJOR! is imbued with a radical sense of purpose, working just as much within a social justice framework as it does within biography. Interspersed throughout Miss Major’s life story are infographics and statistics that underscore the critical issues spurned by the prison industrial complex and the lack of civil and human rights for incarcerated trans women. Because trans individuals’ gender identification makes it so difficult to participate in legal economies, many turn to drugs or sex work. Paired with the war on drugs, mandatory minimum sentences and the rise of private, for-profit prisons, trans women—and, overwhelmingly, trans women of color—are “being criminalized for how they’re surviving.”

MAJOR! sheds lights on these issues by celebrating Miss Major’s trailblazing contributions to the movement and bringing to the fore the lives of Miss Major and other trans women of color, many of whom were previously incarcerated. Refreshingly, the documentary captures these stories in a way that retains the agency of those that tell them while conveying both a sense of humanity and a sense of urgency. To pull from the words of Janet Mock (who was celebrity grand marshal for the 2014 San Francisco Pride Parade alongside Miss Major, the community grand marshal), Miss Major carries the torch of the “unapologetic trans people who ignited our movement so many years ago”—so that, when the dust settles, trans girls are “still fucking here.” –Kathy Zhou