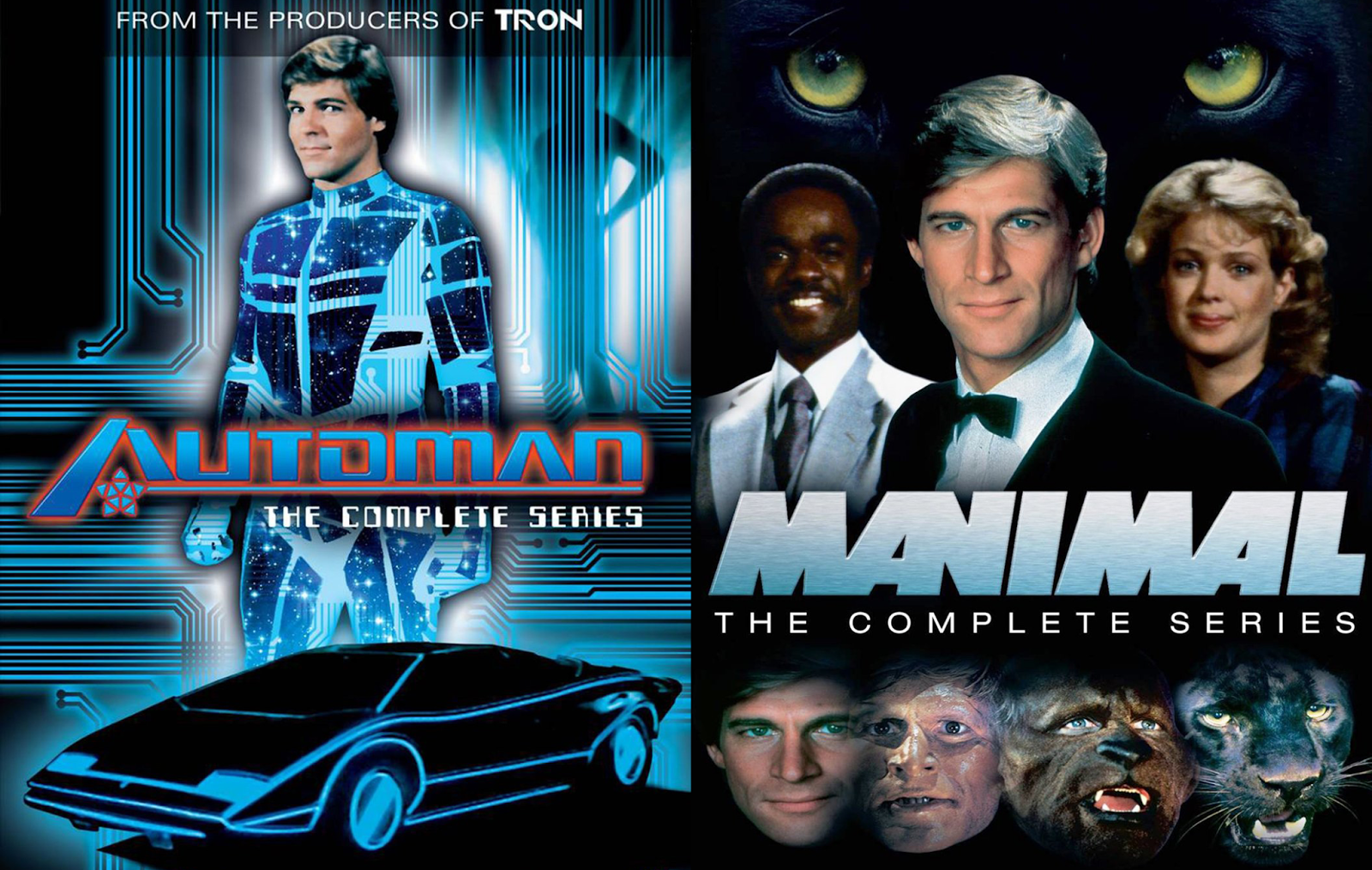 Bad ’80s television has never been so good. These short-lived TV shows originally made their debut in 1983. They were made by legendary creator Glen A. Larson, who also brought audiences the original Battlestar Galactica, Knight Rider, and Magnum P.I. These were slightly before my time, unless they ran into syndication in the late ’80s early or early ’90s. Most millenials, would be in awe of ’80s scifi that isn’t done in irony, ala Kung Fury. Blending the best in science fiction, cop drama, silly special effects, and copious amounts of synth music, both shows are as heavy on outdated pop culture references as they are on unisex mullets. Each of these shows are either awesomely bad, or horribly good, depending on your opinion.

I started my blast from the past with Automan. I do not think that describing it as unintentionally hilarious does this justice. The humor is written in, and in perfect ’80s fashion is forced and finished with a playful wink. This 13 episode series comes from the producers of the original TRON and the effects, for the most part, are equally impressive. Automan’s glowing suit is straight out of TRON, although the special effects budget on everything else seems a little shaky. He’s a hologram, which also gives him near magical powers. The ’80s were a different time, where computers were cutting edge, becoming more accessible, and their capabilities were apparently limitless. Using only a modem, some basic coding, and the amount of memory that wouldn’t even power one of the apps on your smart phone, Walter Nebicher, (played by THE Desi Arnaz Jr.) was able to create a fully programmable and ever-present superhero—Automan. His only weakness is that he needs to ‘recharge’ his power from time to time—he holds less of a charge than your cell phone, apparently. Well, that and his accomplice, ‘Cursor’—a little ghostwriter–looking light up spot guiding him, is extremely rapey for an intangible object.

Automan and Nebicher stumble on a series of conspiracies befalling the L.A.P.D. With high ranking officials being kidnapped and pretty young secretaries being murdered in a cover up, it’s got some pretty heavy plot lines for such a campy show. Then they all begin to fall apart. The stories are absolutely ridiculously fun—as if they were rejected early James Bond scripts. I couldn’t tell if they were purposefully campy, or just tried to inject obvious humor into the action. Here are some honest thoughts I jotted down every time my jaw-dropped in shock from all of the awesome: “Why are they wearing ski gear and bikinis?” “Those are the biggest walkie-talkies I have ever seen.” “Is he really getting into a fight with a pimp over being able to use a phone booth?” Those are only some of the gems you will yell out loud upon the first viewing.

On a technical level, it is shot with a single camera—like a soap opera so you get to see very stilted and odd editing as well as strange looking tight reaction shots and conversations. This show is absolutely amazing in everything it is, and especially everything it isn’t. They don’t make TV like this anymore, and for a good reason, which is a shame because it is addictingly entertaining. Most of all, Automan provided the best line I have ever seen in any action series. When a gun is pointed by one of our over-the-top villains, someone shouts: “He’s going to hurt someone with that gun!” I was also pleasantly shocked when I noticed that one of the bit-part thugs in the first episode was none other than a much younger Captain Spaulding, Sid Haig.

Switching gears over to Manimal—an even shorter lived series released the same year as Automan. The entire eight episodes cut out the in-your-face humor and attempt to go a darker route. Though, it tries to be more serious and more gritty, it propels the same awkward editing, bad acting, and campy special effects to make this another one that’s so-bad-it’s-good. To break the monotony, the lead cop in this drama/action fare is Detective Brooke McKenzie (Melody Anderson). She is allowed to be a tough, capable cop plastered in heavy ’80s blush, that looks like a shellacked ’80s version of Jennifer Lawrence. As she tries to blow the lid off of a crime ring that got her partner shot, she begins to notice that random wild animals seem to almost be aiding in her investigation. Enter the very dapper, very animalistic looking Dr. Jonathan Chase (Simon MacCorkindale). He’s not as ridiculously beefy and classically handsome as Automan, but I’m convinced that there were no shortages of sandy blonde men with obscene jawlines in the ’80s. Throw in a former Bond girl as the first villain into the mix (Ursula Andress), and there are a lot more pretty people in this series. No offense to Mr. Arnaz Jr.

The beauty in Manimal is some wonderfully awkward acting and editing, as well as some really awful body morph effects when the Professor changes into a giant black panther. Imagine an ’80s live action version of Thundercats, then add some polyester fur and silly looking claws and whiskers. Stir that around with lots of predictable synth music (other than the randomly licensed Michael Jackson that makes an appearance), and this is actually a fun ride. The plot makes little-to-no sense, and no sane person would ever jump to the conclusion that the Professor is a shape shifter who is willing to help her. Just as quick as the plot develops, Det. McKenzie unravels it, and anti-climatically thwarts the bad guys.

I’ve got to give this show a little bit of credit by not jumping to the stereotypical Eastern European crime lords that were ever-present in the decade. It’s a little awkward to see Middle Eastern crime bosses before that was a thing, especially since the leader in question looks uncomfortably a lot like Mahmoud Ahmadinejad. If the main goal was to keep the show foreboding and sinister, the blatant Jaws reference was probably not really the best way to go, nor was the thinly veiled references to Sigfreid and Roy. However, if you want to watch a cheeky blonde professor turn into a pissed-off-looking Manimal (and trust me, you do) over and over again, then you have to check this out.

Manimal & Automan not just simply old TV shows you can pull up on Netflix and giggle to, this is an actual investment for some lost television that has been unsoiled by the modern advances in special effects and film making. It’s not just so bad it’s good, it’s so bad that it is goddamn amazing. This is the kind show you’d kill to make with your buddies over a weekend when you’re bored. Thirty somethings will love it for it’s similarities to the old crappy Saturday morning shows we used to be into. It brings back memories of both The Brady Bunch and Kolchak: The Night Stalker in its style. Twenty somethings will finally be able to definitively see what people actually wore in the ’80s, when it wasn’t ‘ironic’. Both of these groups can watch it with their parents who will then go on and on about how this was the golden age of television before the Kardashians ruined everything. Get this set, buy this set, borrow this set. You will not be disappointed, because being disappointed is half the fun.