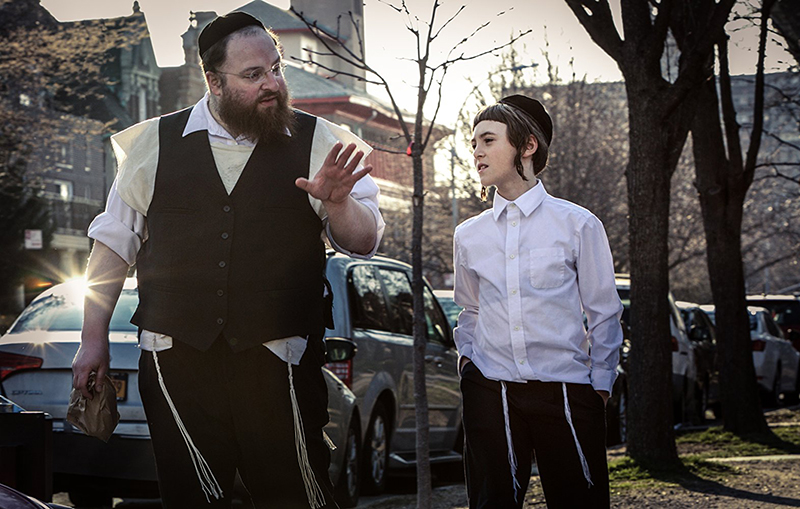 Like most people who have read Chaim Potok but never visited New York, I thought I had a reasonable understanding of the Hasidic Jewish communities that thrive within the Big Apple. Upon watching Joshua Weinstein’s Sundance Film Festival selection Menashe, it was clear just how little I really knew about this particular facet of Judaism. Weinstein’s film is two steps from being a documentary on Hasidic culture—everything is shot on location in Hasidic neighborhoods, his cast consists entirely of Hasidic community members and the dialogue is spoken exclusively in Yiddish. Based on this description, I thought it would be difficult to relate to a world that is so different from my own, but a universal story about the bond between fathers and sons proves that people—regardless of their backgrounds—are more similar than they are different.

Menashe is a film that is quiet and unassuming, but also unexpectedly funny—not unlike the titular protagonist (Menashe Lustig). Menashe and his son begin the film coping with the tragic death of their wife and mother. Hasidic doctrine heavily discourages children to be raised by single parents, and Menashe’s religious leaders have decreed that his son should go and live with Menashe’s brother-in-law whose family life and career have made him a more suitable guardian. At first, the film’s premise might feel like a brutal critique of Hasidic law, but Weinstein’s treatment of the decree is free from judgment. The situation is simply the result of the rules and consequences that weave the fascinating structure of Hasid. Menashe’s own adherence to the doctrine of his religious community clearly brings him joy and clarity as he muddles through his awful job as a grocery store clerk.

The film does a fantastic job of presenting a moving story without casting judgment on the community as a whole. In addition to the bitterness of Menashe’s impending separation from his son, Weinstein focuses on several aspects of Hasidic culture—their songs, prayers and jokes bring an unexpected vibrance to a film that has the potential of being a complete slog.

Lustig’s performance is the glue that holds the film together. He captures Menashe’s pitiful aspects along with his honorable ones and sketches a character that is simultaneously new and familiar. It’s through Lustig’s take on the character that we are able to see a man who actually might not be fit to raise a child in the same space where we see a man who would do anything to protect that child.

Menashe also provides a unique insight into a religious community that is so secluded despite the fact that it exists in the heart of one of the world’s most populated cities. There are so many elements of a great foreign film in Menashe that seeing a familiar part of the New York cityscape is jarring enough to remind us that we’re actually still in America. Not only does Menashe offer a look into a community that often eschews the medium of film and likes to keep to itself, but it shows the hardwired commonality that all people share with one another despite their culture or religious beliefs.

In a political climate that is so divisive, films like Menashe are extremely important. Not only does it tell a universal story in an engaging film, but it creates an opportunity for us to get a better look at the threads that unite us as people. –Alex Springer