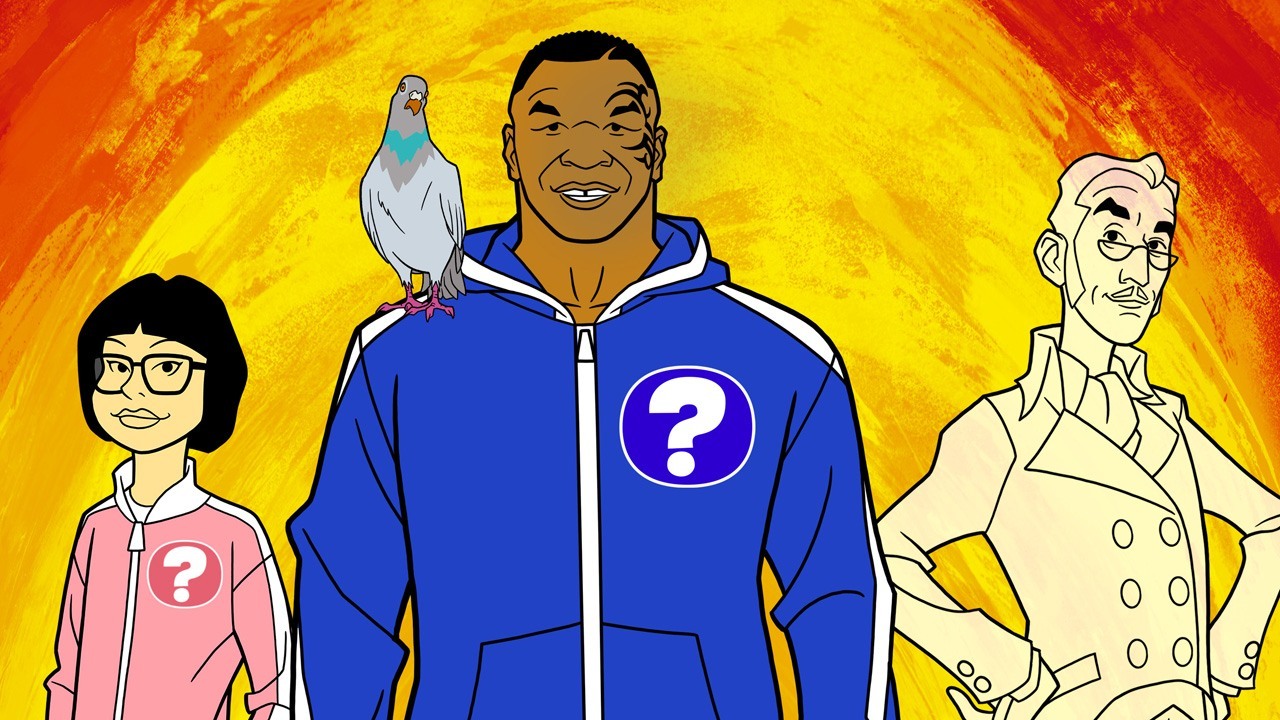 At one point in time, Mike Tyson was “The Baddest Man On The Planet.” A wrecking machine that bested many in the business during the late ’80s and early ’90s. I once saw a documentary on the man where he described his style as picturing his hands going through his opponent’s heads. Like a lot of boxers we know these days, he had his share of scandals and major troubles with the law. Not to mention an ear-biting incident (look it up kids) and whatever pushed him to get the face tattoo. So leave it to the minds of Adult Swim to put the former world champion in a series that would harken back to ’70s childhood while also having fun with modern comedy.

Playing off of a combination of Scooby-Doo, Johnny Quest and the Mister T cartoon shows, the Mike Tyson Mysteries puts Iron Mike together with a team of crime fighters who help people by traveling around in a van to various incidents. He’s accompanied by his adopted daughter Young Hee, the ghost of the Marquess of Queensbury and a pigeon named Pigeon—which plays off of his real life obsession with the birds. Every single mystery they solve is about as ridiculous as the premise suggests, having the team go after the Chupacabra, escorting Buzz Aldrin, dealing with haunted homes, boyfriend werewolves and going to college.

One of the things that makes this series awesome is the voice casting. You have Academy Award winning writer Jim Rash and Dean Pelton from Community who voices a Victorian ghost. Just that idea alone without hearing dialog is funny unto itself. Also sparring off with him for most of the episodes is Norm MacDonald, comedian and former SNL alum, voicing a man who was turned into a talking pigeon by his ex-wife. It’s hard to tell if the two actually followed a script or were given free rein to bounce off each other during sessions, but the interactions between a snippy spirit and a sarcastic bird just work gloriously.

The real fun in Mike Tyson Mysteries comes from listening to Tyson—who does, in fact, voice himself—say his lines about as naturally as you would read a children’s book. The entire series has lines you’d expect to hear in shows like Aqua Teen Hunger Force or The Venture Bros., including an entire episode-long discussion about whether or not magic is real and the power it can have on all of us, which eventually ends in a Spanish leprechaun stealing winnings from a poker game in Vegas. All uncensored for your viewing pleasure.

Mike Tyson Mysteries isn’t without flaws. Like any Adult Swim show there are points where the humor fails and the story simply drags itself out to the point of unreasonable banter. Listening to Tyson talk on his cell phone about a business deal while Pigeon roams a house looking at the dead body parts of a murder victim is funny for the first 5 seconds, but not so funny the remaining time. Fortunately, this is one of the shows where the 10-minute run-time actually benefits the show, because if this went on for 22 I could easily see myself and other viewers getting bored with it very quickly.

Overall, Mike Tyson Mysteries is a funny show with some nostalgia points thrown in, but its clearly for a target audience who actually know who Mike Tyson is and what the show is referencing. As strange as it sounds, a lot of the references and jokes are going to fly over people’s heads, but there’s just enough Adult Swim humor invested into it to make it a worthwild purchase for fans of the network.