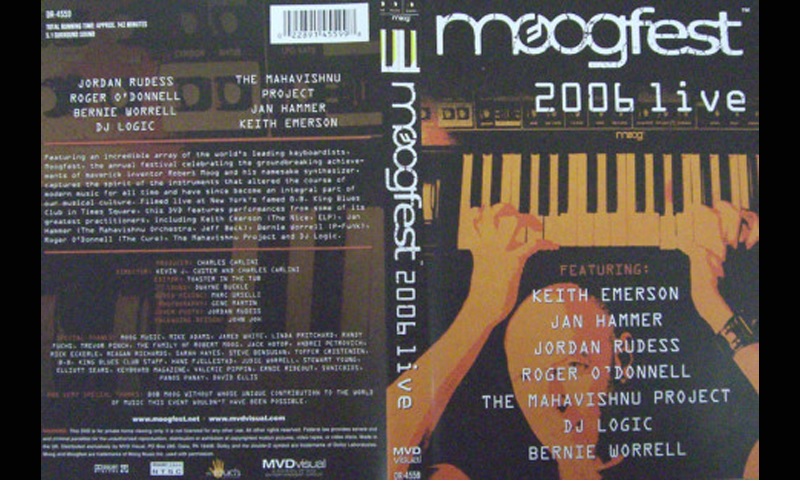 Moogfest 2006 Live serves as a sequel of sorts to the 2004 feature, Moog, sort of a now-watch-these-instruments-in-action presentation. However, whereas the former release focuses on artists who have or currently use various Moog synthesizers to push music forward (Meat Beat Manifesto, Charlie Clouser, Luke Vibert), this feature stars only the veterans (ex-The Cure‘s Roger O’Donnell being the anomaly here). Alternating between interviews and performances, the film makers first question folks such as Bernie Worrell, Keith Emerson and Jan Hammer about how the late Bob Moog‘s contributions changed their lives then back up these arguments with performances from Moogfest in New York’s B.B. King Blues Club. Unfortunately, the aforementioned artists’ mystique and the interest in the art of jamming-on-a-synth-as-if-it-were-a-guitar faded years ago. We’re left with crusty old men making faces,  the type one makes when he’s really into what he’s playing, and bending mod wheels alongside an even more dated version of funk-fusion. Turntablist DJ Logic, performing nowhere near a Moog, provides an interesting angle to Worrell’s set, but he’s inevitably overshadowed by Bernie’s solo lines (played, oddly enough, on a Kurzweil, not a Moog!); Emerson reworks a version of his hits as potential energy drips off an untouched immense modular synth behind him. Hammer’s enthusiasm oozes and hair flies with each squelch and arpeggiation, but it isn’t enough to save this movie. With lackluster performances and nothing more than superficial anecdotes (and no extras), this DVD is a highly disappointing and rather insulting so-called homage to a great man. Stick with the prequel. – Dave Madden