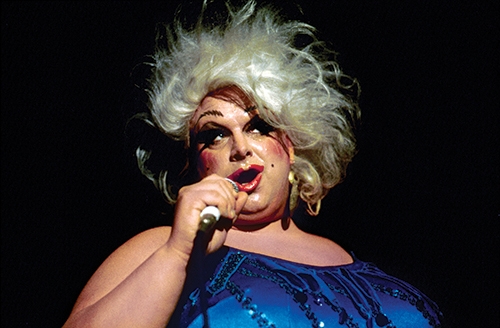 Divine from the documentart "I Am Devine

From lighthearted rom-coms to iconic documentaries, Salt Lake’s Damn These Heels! LGBT Film Festival features some of the most heavy-hitting films in contemporary, queer cinema. The festival celebrates 10 years of programming this year, with double the films running July 12 –14 in the Jeanne Wagner and Black Box Theatres at the Rose Wagner Performing Arts Center. This year’s lineup is phenomenal, with unique films sure to satisfy the most fastidious film buff. Find the complete schedule, and buy passes and tickets at utahfilmcenter.org.

The story of the Continental Baths is one of a gilded age of gay liberation, set in the post-Stonewall, pre-AIDS bubble of early ’70s New York City. When businessman Steve Ostrow opened the club, cops were corrupt, and the Mafia exploited gay patronage in shoddy bars and unsanitary baths. Ostrow’s club, in operation from ’68 to ’74, was located underneath the beautiful Ansonia Hotel, was open 24/7 and featured a massive dancefloor, 400 private rooms, an orgy room, indoor pool, bars, cafes, a hair salon and an STI clinic. Director Malcolm Ingram (Small Town Gay Bar, Bear Nation) puts Ostrow in his rightful spotlight—his world-class demeanor and passion for gay rights established the Continental Baths as the city’s premier gay entertainment venue. It’s the place where a barely legal DJ called Frankie Knuckles was fathering house music and where Bette “Bathouse Betty”Midler and Barry Manilow started their careers. It then became a nightlife hotspot, entertaining celebrities Andy Warhol, Mick Jagger and others, though its popularity eventually went bust when straight patrons flooded in. In the current, mediated cruising culture dominated by Grindr this is a glorious tale of the good ‘ol days—revisit that golden age of sex and song, and experience the Continental. –Christian Schultz

Divine was that campy, trashy, queeny diva who, besides being one of the most notorious actors in cinematic history, remains the most iconic drag performer to ever grace a stage. She’s a cult hero, a midnight movie celebrity, Hi-NRG techno artist and an all-around genuine, loveable personality. This documentary presents Divine’s life story, from Glenn Milstead’s high school years through her acting heyday with John Waters and the performances through the ’80s that led to exhaustion, overeating and an untimely death in 1988 at the age of 42. New and old fans (of Divine, Waters and ’70s counter culture) will appreciate this overview of the queer icon, told by his friends, his mother and soundclips from the ol’ queen herself. Beyond the notoriety, you’ll feel the warm generosity of Divine, who, as a teen Dreamlander in Baltimore, would dress up like Liz Taylor and throw lavish parties (at his parents’ expense). Regardless of where Divine makes sense in your life (perhaps you’re Salt Lake’s biggest Edna Turnblad fan), this is a great American tale of talent, the trappings of fame and a great big, queer heart. –Christian Schultz

G.B.F. (Gay Best Friend), directed by Darren Stein (Jawbreaker), is all about the commodification and objectification of “gay.” The LGBT community is often marginalized in many negative ways, and one way this takes place—that almost doesn’t seem negative—is when they’re treated like fashion accessories instead of like people. G.B.F. explores this marginalization through humor, sarcasm … and Mean Girls references. G.B.F. follows Tanner (Michael J. Willett) as he is outed at his high school and finds himself the target of the three most popular girls in school—Fawcett (Sasha Pieterse), ‘Shley (Andrea Bowen) and Caprice (Xosha Roquemore)—all vying to make him their personal G.B.F., but the situation might just lose him his B.F., Brent (Paul Iacono). Megan Mullally makes an appearance as Brent’s overly accepting mother, and Natasha Lyonne is brilliant as the school’s Gay-Straight Alliance teacher representative. The dialogue in this film is off-the-charts fabulous, and the music ain’t too damn shabby, either. It’s a little slow in the middle, but, hey, so was high school. G.B.F. also gives the best answer ever to the stupid, “Who’s the boy? Who’s the girl?” question often put to male gay couples: “Actually, I think you’re both the boy. That’s kinda the point.” –John Ford

My favorite American is often Gore Vidal. He’s the great American gadfly—WWII vet, Hollywood screenwriter, postmodern novelist, public intellectual, socialite and patrician of our Republic. His life’s story is included in a queer film festival for his unapologetic defense of homosexuality and feminism from the postwar period until his death last summer. Vidal’s 1948 novel, The City and the Pillar, gave America its first depiction of explicit homosexuality with a positive outcome—he wrote a gay subplot into the classic film Ben Hur and the protagonist of his 1968 novel, Myra Breckinridge, is a campy MTF dominatrix. He also had a life partner, Howard R Austen, his greatest friend, whom he lived with for 59 years. This doc gives the late Vidal a fresh vitality through numerous interviews taken throughout the man’s life, alongside commentary from some friends—his literary executor, his contended dauphin, the late Christopher Hitchens, among others, through portraits of his infamous feuds (with William F. Buckley, Norman Mailer, Truman Capote) and in lessons learned from his friends (JFK, Gorbachev, Faulkner). Whether you’re a big Vidal fan or are unfamiliar, this is a lovely gateway into the life of a great queer patriot. –Christian Schultz

It’s rare to come across a perfect film—one that captures the many abstracts of humanity so clearly and closely, you feel as though it has pulled out your soul and translated it to the screen. This award-winning drama is the DTH!’s centerpiece film, and rightly so. Set in ’80s-era Montreal, Xavier Dolan’s Laurence Anyways tells the decade-long story of Laurence Alia’s (Melvil Poupaud) gradual transformation from a man to a woman, and the resulting complications to his relationship with his girlfriend, Frederique Belair (Suzanne Clément). The story is unique, painful and surprisingly relatable, with unforgettable performances by both actors, but it is the execution that shines most in this film. The visual details, both fantastical and subtle, complement the dialogue poetically, with a glorious soundtrack that blends new wave staples with classical compositions. The only part I lamented was my lack of French fluency so I wouldn’t have to rip my eyes away to read the subtitles. If you only go to one film at DTH! This year, make it this one. –Esther Meroño