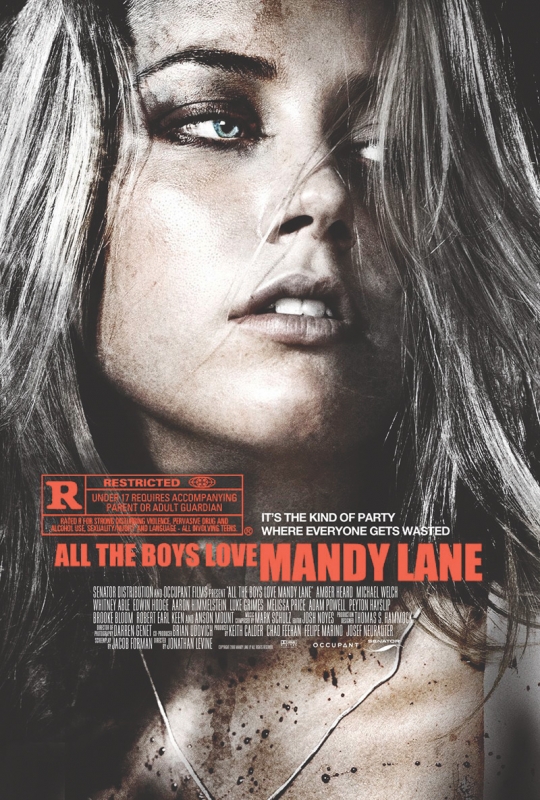 All The Boys Love Mandy Lane
RADiUS-TWC
In Theaters: 11.01

If the date on its IMDb page is correct, it’s not surprising Jonathan Levine’s slasher flick sat on a shelf for the past seven years. For some odd reason, Mandy Lane (Amber Heard) is the “it” girl every male peer wants to sleep with. Sure, she’s the virgin who can run fast on the track team, but are guys really willing to kill themselves to get in her pants? The first 30 minutes follows a pack of rambunctious teenagers as they set off for a weekend at an isolated countryside farm with blaring pop music, montages filling most of the running time and every male character declaring “dibs” on Mandy. We are then given the privilege to watch uninteresting kids do uninteresting shenanigans for the next 30 minutes. The last portion of the film is the only period of time the kill count matters, but at that point, you just want everyone to die as quickly as possible, so you can go home wishing you could get your money back. From the clichéd finale twist to the tedious acting abilities, it’s a shame Darren Genet’s superb cinematography was wasted on such mediocrity. Levine has definitely improved his game since this venture with the releases of The Wackness and 50/50, but sometimes your past comes back to haunt you, which, in the case, is certainly more terrifying than anything in this film. –Jimmy Martin

Every so often, a film comes along in the festival circuit that makes people stop, turn their heads and ponder its abnormality. Think the The Blair Witch Project as it did 14 years ago with the reinvested interest in the found footage genre. Now, director Randy Moore has attempted to gain awareness for the guerrilla-style art of filmmaking with the release of Escape From Tomorrow. Shot without any form of permission on the Disneyland and Disney World theme park properties, Moore’s dark tale follows a recently unemployed father (Roy Abramsohn) on vacation with his family and tracks his spiral into insanity as he stalks two underage girls while neglecting his family. First, I’ll give those involved a pat on the back for their crafty approach to develop something distinctive that would certainly get noticed among the masses. However, with that said, a simple, clever idea does not a movie make. As soon as the wonderment of the initial draw of the film wears off, you’re left with 89 minutes of pitiful acting, asinine plot devices and undiluted discomfort. My hope is that Disney sues everyone involved—not because they filmed on their property without consent, but because they have wasted my life with absolute garbage. Moore’s attempt to showcase Disney as a nightmarish spectacle fails on all sides since the only nightmare walking out is the thought of ever having to watch it again. Yikes! –Jimmy Martin From the advertisements, Alfonso Cuarón’s sci-fi thriller appears to be about Sandra Bullock aimlessly floating around in space for 90 minutes, but such is not the case. While on a routine mission, medical engineer Ryan Stone (Bullock) and veteran astronaut Matt Kowalski (George Clooney) are forced to jump from space station to space station after debris from an exploding Russian satellite annihilates their shuttle, leaving them adrift in the cosmos. Cuarón opens the doors to this year’s award season by unleashing this heart-pounding nail-biter that advances filmmaking technology to the next level. Like James Cameron’s Avatar, the 3D imagery actually enhances the zero–gravity environment and immerses the viewer into the film, rather than using the medium for hokey gimmicks purely to raise ticket prices. If a drinking game were made for every time Ryan or Kowalski wildly grasp for anything to keep them from floating off into absolute nothingness, you’d be dead before the credits roll. As the newbie to weightlessness, Bullock allows the viewers inside her spacesuit (literally with Emmanuel Lubezki’s cinematography) while Cuarón utilizes elongated tracking shots to simulate the overwhelming sensation of being hundreds of miles above the Earth’s surface. –Jimmy Martin

One of the worst feelings while sitting through a movie is witnessing your favorite actors or actresses crash and burn in a film that is neither what you expected nor wanted. Such is the case with director David Gordon Green’s remake of the Icelandic film Either Way about two road-maintenance workers, Alvin and Lance (Paul Rudd and Emile Hirsch), who spend the summer of 1988 painting yellow divider lines down the road in a recently scorched, isolated state park. Sounds riveting, right? As the days waste away with monotonous banter and bouts of silence between the two, so do the concentration levels of spectators. As Lance spews on about his desires to return to the exciting city life, he is continuously asked by Alvin, “Can we just enjoy the silence?” If you ask me, there’s enough silence in this film already. Say something! Say anything! It’s quite possible the preconceived notion of Rudd’s comedic abilities overshadow his attempt to be the dour, down-on-his-luck boyfriend, while Hirsch has nothing to work with as his sporadic moments of hilarity are met with unwelcoming arms. While some may see Green’s vision of resurrection and maturity, the most prominent aspect of that notion comes from Tim Orr’s splendid cinematography of the charred Texas landscape rather than the two gifted actors who are wasted away. –Jimmy Martin

Made of Stone
MVD Entertainment
In Theaters: 11.06

Directed by This Is England’s Shane Meadows, Made of Stone plays out like a combination platter of winning rock-doc formulas, including fly-on-the-wall style interviews and concert footage, mostly aimed at profiling the iconic Stone Roses’ return to the stage after a lengthy breakup. At its best, the film aims right for the fan-boy pleasure center, rife with “on the street” fan interviews, new studio footage (the re-recordings of “Waterfall” are incredible) and the requisite dollop of news-y style clips and press releases related to their reformation. However, what’s made many rock-docs shine (a “through the eyes of those who lived it” backstory, never-before-seen footage, etc.) seems largely absent here. No real “nuggets” for hardcore fans to dig into, an über-abridged history and, most tragically, an essential gloss-over of the circumstances surrounding their breakup, render the whole affair a little bit too saccharine-celebratory. Perhaps the film’s ultimate goal was to lend fans a new vantage point, one which looks forward on the Roses instead of backward … and the studio footage is undeniably great. However, in terms of documenting one of the ‘90s’ most important and influential cultural forces, its lack of historicity brings it up quite a bit short, and it’s a shame. –Dylan Chadwick
Photos: