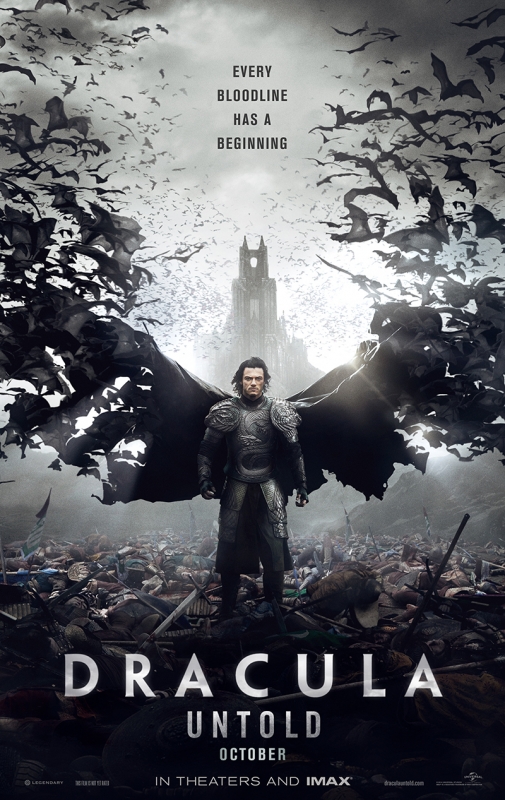 Dracula Untold
Universal
Director: Gary Shore
In Theaters: 10.10
After Vlad the Impaler (Luke Evans) decides to stop murdering thousands for the Turks and start a life of family and peace, he is confronted by their leader, Mehmed (Dominic Cooper), and given an order to send 1,000 children from his kingdom to the Turkish army. Unwilling to give in and knowing the fate of his palace, Vlad seeks aid from a ferocious vampire, as one does, and makes a deal to receive his powers for three days to fight off his enemy. However, if Vlad drinks the blood of another human, he will remain a vampire for all of eternity. Well, folks, the name of the film is “Dracula Untold,” so it’s pretty obvious what Vlad’s future holds. The movie suffers from prequel syndrome where nothing is suspenseful, and the entire production presents situations where audiences already know the outcome. SPOILER ALERT: The film concludes in modern times, which is exactly where I’d rather see it begin. The action is the only piece of entertainment, but is subdued with poor camera angles and rapid edits, making it difficult to focus on anything of value. Universal Studios decided to make this production the launch pad for a Marvel-esque cinematic universe that connects all their iconic classic monsters (i.e. The Mummy, Wolfman, etc.), but much revamping (pun intended) is required to make their endeavor nearly as successful. –Jimmy Martin

Filmage: The Story of Descendents/ALL
FilmBuff
Directors: Matt Riggle, Deedle Lacour
In Theaters: 09.30
The thing about Descendents that always appealed to me was that they played loud, fast, angry music, but they were also really funny and occasionally wrote songs about how they liked girls who didn’t like them. So, for a nerd in high school, they were the perfect band. Obviously, the band (and their later incarnation, ALL) appeal to a lot of people, leading to a string of reunion shows over the past five years and Filmage, a documentary chronicling the history of the band. Featuring interviews with every single member of the band (minus original guitarist Frank Navetta, who died in 2008), the real heart and soul of Filmage—and the band itself—is drummer Bill Stevenson. He is the sole consistent member of the band and serves as the focal point of the narrative as Milo goes to college, the band relocates from California to Colorado, and various singers come and go from ALL. Later in the movie, Stevenson’s battle with a brain tumor is detailed and serves as the catalyst for Descendents and ALL to reunite for their recent festival gigs. Without Stevenson’s gentle, farting giant of a personality, the movie wouldn’t be nearly as interesting—he’s one of the most engaging personalities in the many punk documentaries made in recent years. It’s hard to recommend films like this to non-fans of the band in question, but for those who are already converted, Filmage is everything you’ll want. –Ricky Vigil

The Freemason
Joseph James Films
Director: Sohrab Mirmont
Released: 12.07.13
As one of the most decorated films coming out of this year’s Salt Lake Comic Con Film Festival, Sohrab Mirmont’s The Freemason has been gaining some positive buzz in Utah’s indie film community. The story follows a narrative that appears to be inspired by the novels of Dan Brown and Stieg Larsson. When a wealthy Freemason is murdered, his daughter Rana (Alex McKenna) enlists the aid of an investigative journalist named Cyrus (Randy Wayne). Cyrus strikes up a shaky alliance with Detective Weed (Sean Astin)—who also executive-produced the film—in order to crack a case that delves deeply into the realm of Freemasonry. The film makes good use of Utah’s wealth of film locations—most notably shooting several scenes within Utah’s own Masonic Temple—while Astin and Wayne maintain a reluctantly chummy chemistry. The Freemason struggles a bit with pacing—I thought the first half of the movie did a good job of populating the board with potential killers and shedding an objective light on the world of Freemasonry. The final third of the film felt rushed, and was complete with the inclusion of a deus ex machina that forged an uncomfortably convenient relationship between Cyrus and the Freemasons. –Alex Springer