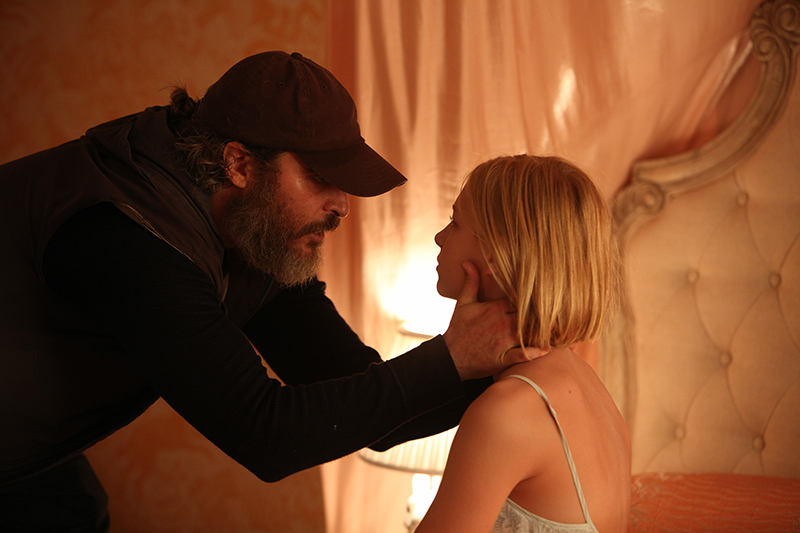 I have had a love-hate relationship with Joaquin Phoenix’s work over the years. There’s no question of whether or not he is a talented actor because he has clearly proven himself in the past. However, when this gifted thespian decides to journey down a path of senseless faux documentaries, one can only question the future of their career. Thankfully, it appears that we have come completely out of the clouds with director Lynne Ramsay’s dramatic hitman tale wherein Phoenix stars as Joe. Abused as a child, he grew up to be an adult with a knack for taking care of criminal individuals for a price. Rather than using guns as a primary weapon, Joe prefers the grip of a large hammer. While continuously coping with his abusive past and taking care of his ailing mother (Judith Roberts), Joe is hired to locate Nina (Ekaterina Samsonov), who has been kidnapped and placed in a sex trafficking ring. Being gifted at his unconventional occupation, Joe locates Nina fairly quickly, but that’s when the bulk of the story begins to unwind before our eyes. I had the privilege to witness this film at the 2018 Sundance Film Festival, and out of 30 screenings, it was by far my favorite production of the event. Phoenix disappears and envelops himself in Joe’s inner demons, which attempt to balance his psyche with affection and revenge. Along with Thomas Townend’s captivating cinematography that enters a realm of gorgeous chaos, Ramsay delivers a tumultuous story with a less-is-more sensibility. Rather than showcasing all of the ultraviolence on the silver screen, she forces the audience to imagine the reality of the situation, which can be even more disturbing than if she had revealed all her cards. I have always been fascinated with hitman films, and this gem fits alongside other productions such as 1994’s Leon: The Professional and 2011’s Drive. –Jimmy Martin