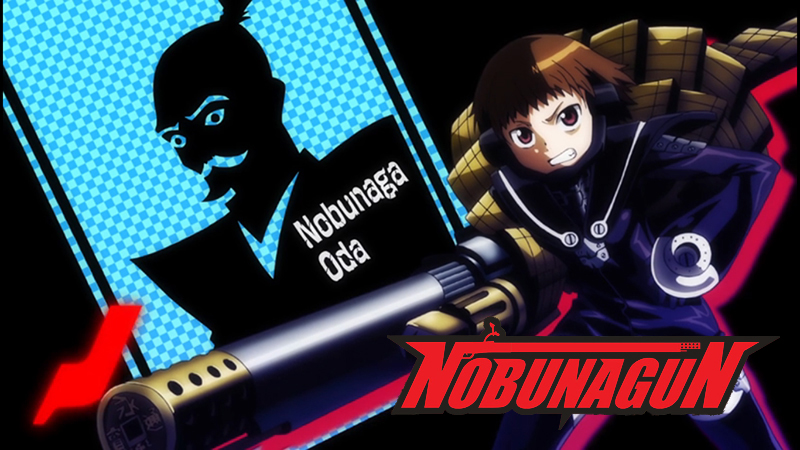 Drawing upon my experience with anime, it doesn’t seem like Nobunagun has done much to revolutionize the genre. Many of the tropes that one would find in most serialized Anime are present. Snarky teenage protagonist? Check. Tentacle beasts? Check. Summonable battle armor? Check. The one original aspect of the show—heroes that channel the genes of historical figures—actually ended up serving to its detriment. All the same, there was some nicely constructed chemistry among the principal characters and it was hard not to geek out just a little bit during some of those epically-rendered fight scenes.

When oceanic tentacle beasts attack Taiwan, a socially awkward girl named Sio Ogura accidentally finds herself between one of them and a Cloud Strife-looking dude decked out in serrated battle armor. Trying to protect him, she picks up his glowing orb of gene-channeling power and the spirit/essence/whatever of Oda Nobunaga, a badass Japanese warlord from the sixteenth century. Part of this transformation grafts a gigantic machine gun to Ogura’s arm and she blows the creature away. The remainder of the series follows Ogura and the exploits of DOGOO (Defense Organization aGainst Outer Objects), a team of alien-slaughtering soldiers.

Channeling the super powers of dead historical figures actually sounds like an interesting idea, but it felt like Nobunagun used this idea as a gimmick. In theory, I would watch the hell out of a series that brought Jack the Ripper, Isaac Newton, Mahatma Ghandi and Oda Nobunaga together to fight interdimensional monsters. But Nobunagun simply name-checks these historical figures as an excuse to conceptually design flashy robo-suits that bear slight connections to the figures themselves. Newton has this crazy gravity boot that she kicks stuff with, Ripper has knife-wings—at least they made Ghandi a defensive character. Regardless of how cool everyone looks, the idea of condensing actual people who shaped actual history into goofy power suits didn’t work for me.

Something I didn’t expect from Nobunagun was the characterization and voice work of Ogura. As soon as I saw that she was a student at an all-girl prep school, I executed a legendary eye roll. Once the story picked up, however, Ogura actually evolves into a very likable main character. She’s a total geek about tanks and military history which makes her an outcast among her very girly schoolmates, so seeing her own an opportunity to wield an obscenely large machine gun is fun to watch. Outside of her explosive fight scenes, Ogura’s charmingly optimistic teenager creates an interesting contrast with the rest of her DOGOO team. For the most part, Ogura is working with some jaded warriors who have no time for geekery, and it’s fun to see how she plays off of each of them. Ogura’s painful crush on Adam Muirhead (Jack the Ripper), and sexual confusion towards Jess Beckham (Newton) created some interesting character tension.

Jad Saxton throws down some perfect voice work for Ogura, delivering her dorky one liners and conveying her angsty teenage frustrations without coming across as whiny. Instead, she helps establish Ogura as a hero-nerd like Scott Pilgrim or Kamala Khan. Her unbridled enthusiasm for doing the right thing is endearing, but it also sets the stage for some interesting character development.

While Nobunagun doesn’t throw a whole lot of innovation into the Anime genre, it does go above the average as far as artistic design and voice acting. Fans who like their Anime with a bit of an edge or more sophisticated story might want to skip this title, but fans who just want to watch bionically-powered superheroes kick some kaiju ass will find something entirely watchable here.