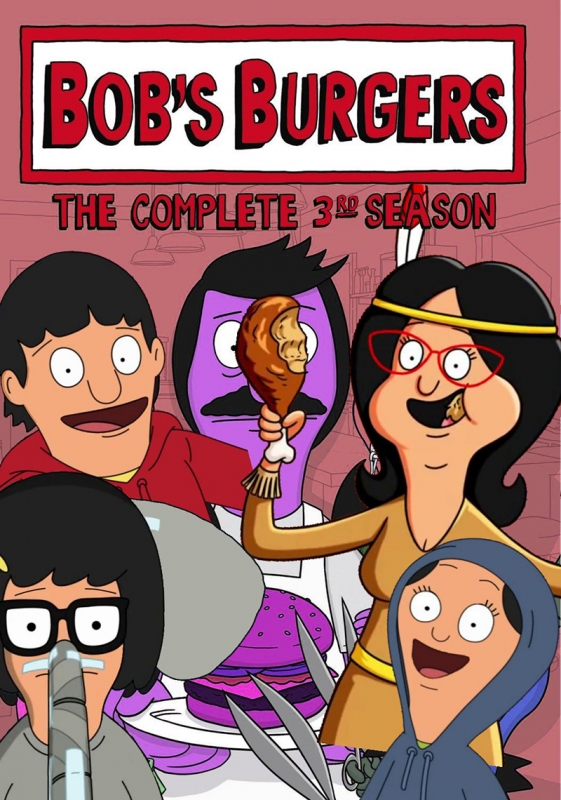 I’m a deeply appreciative fan of Bob’s Burgers, one of the best of this current wave of grown-up cartoons. It’s not a show about a burger joint, it’s about a family and their never-ending optimism throughout the countless misadventures around and about their burger joint—and this family gets up to some serious hijinks. The third season in particular features some of my favorite episodes, including the E.T.-inspired “O.T.: The Outside Toilet” and Louise-centric coming-of-age tale “Boyz 4 Now”. However, my optimism for the show is tempered by criticisms of this expensive and bare-bones waste of money. I was excited about commentary with the hilarious cast, or some sort of behind-the-scenes footage or outtakes, but there is not a single special feature or commentary on this entire thing. Each disc contains the episodes and nothing more. The discs are also print-on-demand, their purple-tinted undersides betraying a burnt CD-R nature usually reserved for bootlegs and other home-brewed means of media transfer. It’s low quality and cheap, insulting considering the entry price. If you absolutely have to own Bob’s Burgers, I understand and relate—but that’s what the suits behind this sub-par release are counting on. I’ll stick to Netflix, thanks. –Matt Brunk

As the first episode of a brand new season—and a brand new Doctor, played by the fabulously Scottish Peter Capaldi—Deep Breath covers plenty of ground, especially in the character development category of everyone involved. The episode begins with a T-Rex appearing in Victorian London subsequently spitting out the TARDIS, so there’s no shortage of action in Deep Breath—though a large portion of the episode is spent deconstructing the relationship between the Doctor and Clara (Jenna Coleman), making it very clear that the Doctor’s companion is not his girlfriend. This analysis is important in wake of the heavy romantic-ification of the Doctor that took place while Matt Smith played the role (There’s a great Tumblr post comparing one Matt Smith storyline to Twilight:). The DVD also comes with several extras making it worth the purchase price, including Doctor Who Live: The Next Doctor the live broadcast, in which Peter Capaldi was first introduced as the new Doctor, and The Real History of Science Fiction: Episode 4: Time. In the end, Deep Breath provides us with a Doctor who is to be feared, yet can still be idolized and looked up to. This season is promising to be a wonderfully dark exploration into who the Doctor truly is. –John Ford

As Roland Emmerich’s 1998 remake of the same name set the bar pitifully low, 2014’s Godzilla didn’t have to try terribly hard to be an improvement. Ironically, it’s the similarities that the 2014 adaptation shares with Emmerich’s Independence Day that make it a decent monster/disaster flick instead of a godawful one. The emotional gravitas that Bryan Cranston and Juliette Binoche capture in the film’s opening scene manages to use the carnage created by Godzilla’s brawl with two Cloverfield-esque mutants as a chasm across which we see families get reunited. Based on Cranston’s solid performance in the first act of the film, the decision to kill his character so early in the film never quite sat right with me. It felt like a wasted opportunity to have Cranston and his son Ford (Aaron Taylor-Johnson) repair their estranged relationship by working together. That being said, the film’s sweeping landscapes and metropolis-decimating monster battles take full advantage of the Blu-ray’s audio and visual capabilities. It’s not a perfect film, but it’s definitely a great title to demonstrate the chops of a decked-out home theater. –Alex Springer