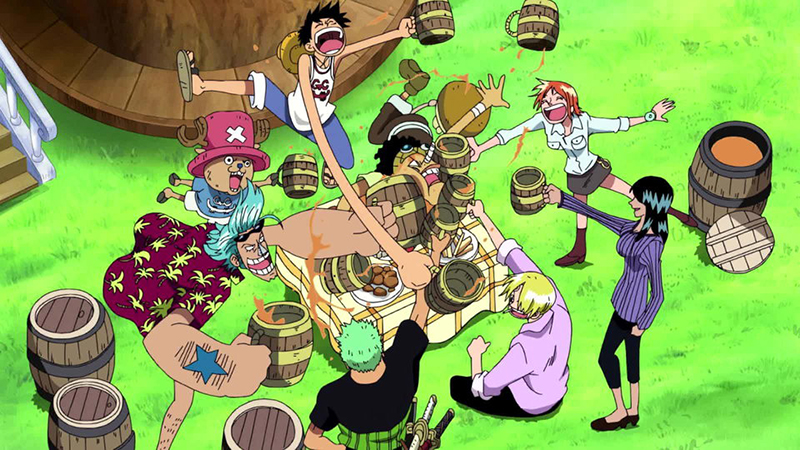 Review: One Piece: Collection No. 13

One Piece: Collection No. 13

For my fellow One Piece fan boys and girls, Collection No. 13 is the long-awaited wraps up what is perhaps the best story arc in the entire series. The Enies lobby arc and the Water 7 Saga are concluded in this collection and it has truly a bittersweet ending. If you haven’t been watching One Piece but would like to get started, I’d recommend starting from Collection No. 11 or 12 so you can catch the entire Enies story arc. If you are feeling really ambitious (or are just addicted to binge-watching stuff on Netflix) then you should start from the very beginning of One Piece, but be warned that One Piece: Collection No. 13 includes episodes 300–324. This is one of, if not the longest-running anime that Funimation has, and it still tops the charts, always sitting in one of the top 5 spots every year. I’ve been committed to One Piece for eight years now and I feel like our relationship is going strong. One Piece never disappoints and always keeps me coming back for more.

In One Piece: Collection No. 13, we watch as the war at Enies Lobby rages on and the Straw Hats desperately fight to get their kidnapped crewmate back. There is also an incredibly badass fight scene in this collection which showcases Zoro’s nine-sword fighting style. The bounty for each Straw Hat increases and the Going Merry meets a fiery end.

Yes, you read that correctly—the Straw Hats bid farewell to the beloved Going Merry, which is not something that I was emotionally prepared for. Luckily, they get an even bigger and better ship to sail on, but the memories associated with the Going Merry will always keep it in my heart. I honestly never expected the Going Merry to depart from the Straw Hats at any point during the series, but I think that, with the new crewmates and growing demand for better defense, it was needed. Funimation did the Going Merry justice with its farewell—I’m not bitter towards them in any way for Merry’s unexpected death.

One Piece has gotten into the habit recently of going back into a lot of the main characters’ backstories, and I love it. In this collection we learn more about Luffy and what happened with his family. You also learn about some very unexpected family relations during this collection that will have your mind in a twist and make you question things from previous episodes.

Collection No. 13 also has a lot of great character development. We get to watch as Cody and Hermpo grow into their own and become more significant characters in the series. The Straw Hats also gain some new crew members who seem pretty promising, and the relationship between Luffy and their rescued crew member gets … interesting.

One Piece: Collection No. 13 also includes some fun extras like cast and crew commentary as well as textless songs—which is my favorite extra because the music from this particular collection of episodes was truly fantastic. The Engish dub for One Piece still needs some work, but it’s not bad enough to distract from the anime.

If you’ve looked into purchasing physical episodes of One Piece, I’m sure you’ve noticed that they come in two types of disc sets—collections and voyages. I’d recommend buying the collections like this one because they have twice the amount of episodes as the voyages do and they tend to have better extras. Also, the artwork on the cover is much better on the collections than the voyages, which is a big deal if you’re someone who likes to collect DVD sets like me.

If you’re an Otaku and you haven’t watched One Piece, then there might be something wrong with you. I realize that One Piece is a bit of a commitment if you like to be relevant with shows, but trust me—it’s worth it. I’ve never felt at any point during the One Piece series that the writers were just using filler episodes to keep the series going, and they’ve also improved upon their writing time and time again. The fact that One Piece just concluded its best story arc to date in episodes 300 through 324 should back up what I’m saying. So why are you still reading this? You should be watching One Piece.