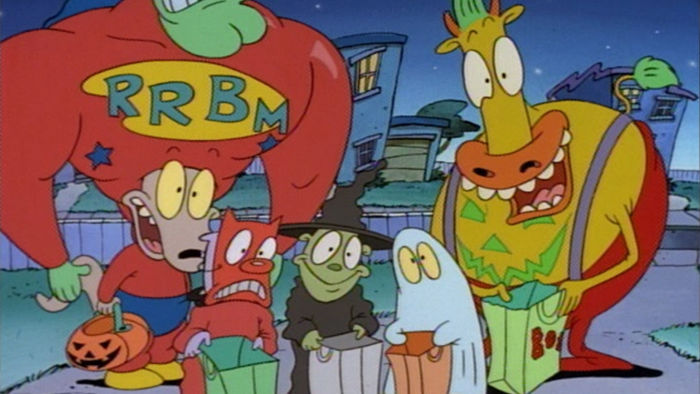 Review: Out of the Vault: Halloween Collection Out of the Vault: Halloween Collection

It’s that time of year again, folks—the holidays are upon us. This means that TV shows will start showing their holiday episodes. The children shows are no exception—Nicktoons have a grand tradition of some of the best holiday episodes around. Out of the Vault includes five different Nicktoons—Aaahh!! Real Monsters, Angry Beavers, CatDog, Hey Arnold! and Rocko’s Modern Life—each showcasing two Halloween-y episodes.

The “real” monsters are naturally up first—Ickis, Oblina and Krumm are the clear choice to begin the Halloween hijinks. They start off by getting “grounded” from going out on Halloween—it would be a pretty boring episode if they didn’t get out though, right? This is the one time of the year they actually fit in. Krumm and Oblina wander from house to house, enjoying our festivities and finding them odd all at the same time. Ickis switches places with an unsuspecting kid and lives as a human for a day, while the real kid wanders the monster school, posing as Ickis. It’s the weakest Halloween episode, which seems counter-intuitive given that there are legitimate monsters involved.

Angry Beavers had my favorite Halloween episode. It’s an homage to the ridiculous B-movie horror films and it’s spot on. A comet crashes to Earth, but this is no ordinary comet, it’s obviously carrying an evil alien bent on consuming the world’s reality. Our little beaver brothers are out trick or treating a day early to avoid the crowds, but they aren’t having any luck. Norbert convinces Daggett to try one more house and amazingly enough, it’s the home of their all-time favorite B-movie actor, Oxnard Montalvo. He’s not alone, the typical scientist and ankle-rolling girlfriend are in the house as well—a fantastic recipe for a terrible B-movie horror episode. The other two segments aren’t as Halloween-y but they’re still fun.

Catdog hits on two of the biggest Halloween monsters—werewolves and vampires. When the full moon strikes, Dog transforms into a meaner, fluffier version of himself. Cat figures he just needs to get it out of his system, so he keeps his mouth shut while Dog jumps through a bunch of hoops to join the “pack” of dogs that normally bully CatDog. The vampire episode is much more in the spirit, and it pits Cat against a town of vampires, including his other half. Poor Dog is the first victim of the vampire ticks that ravage the town that CatDog inhabits. Luckily, there’s a giant garlic plant nearby that has enough garlic to soak the whole town in garlic juice—saving them from the terrible fate of vampirism. It’s an entertaining episode.

Hey Arnold! is the most nostalgic on this set for me. Not just because I used to watch it when I was younger, but it’s also a look back at what life was like as a kid before the Internet and cellphones took over our lives. The Halloween episode is a testament to the ingenuity kids have when they all work together. It starts with all the adults obsessing over a UFO television show, giving Arnold and Helga a fantastic idea for a Halloween prank—staging a fake UFO landing. Arnold and Gerald take the task of putting on a fake radio broadcast while Helga and the other kids dress up as aliens—they do a damn good job of it, too. Arnold does all the sound effects for the show, while Gerald uses his announcer voice to narrate a fake UFO attack. The kids do such a good job that the whole town actually believes the story and goes crazy. It’s a fantastic episode that outshines the other two.

Rocko’s the closer and it was the trippiest one to watch. One of the episodes sends Heffer to heck to deal with the weird, udder Devil that shows him the error of his ways. That’s not the weirdest part of the episode—the weirdest part is the first two minutes. It opens with a chicken behind a desk, interviewing another chicken, Karen. He congratulates her on getting a job at Chokey Chicken, the KFC in Rocko’s world. The next scene is a package of chicken coming out of a machine, with the name Karen stamped on the front. What the fuck?! How did I miss that as a kid? It’s darker than anything else on this disk and frankly, a little scary that it’s a kid’s show. The other good episode is the Rocko version of Rear Window. It’s quick, but it’s great.

Out of the Vault is a great Halloween collection for indulging your nostalgia, as well as entertaining the little ones. None of the episodes are terribly frightening, so it’s good ol’ fashioned fun before Halloween. It’s definitely worth the price of admission.