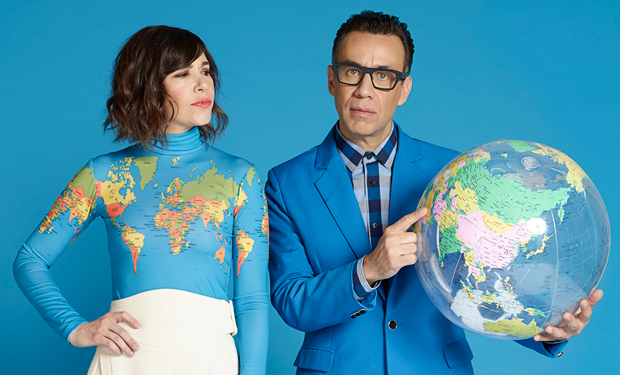 Fans of Portlandia rejoice! The latest season of the hilarious, Lorne Michaels–produced sketch show has a little (or a lot) of something for everyone to get excited about. These half-hour, PG-13 friendly episodes feature SNL’s Fred Armisen and the wonderfully talented Carrie Brownstein. Season 5 is packed full of guest stars, clever insights, and hilarity. If you’re new to Portlandia, just sit back for the ride. Armisen and Brownstein play multiple characters in this episodic sketch show. Some episodes contain one full story, others interweave multiple stories. The two main players will often switch genders and play up stereotypes with amazing results. This is the thinking person’s sketch show–the elements of SNL are present but minus the silly celebrity impersonations.

Some of the impressive characters that Armisen and Brownstein have come up with are not only unique, but super entertaining. The season starts with the origin story of two of their recurring characters, Toni and Candace, a pair of feminist bookstore owners. These two ball-busting working girls started out in the book industry in the ’80s. Pit against each other to accept a job after a merger, and competing for the attention of a womanizing boss, it’s like Working Girl on a glamour decade coke binge, and it’s wonderful. The satire is strong with this one, and the episode reminds us of a (probably fictionalized) time where women were novelties in business and slept their way to the top. Not that it’s a spoiler, but the two women end up working together to stick it to ’80s misogyny. That’s not the last we see of these two characters, and when we meet them again, we are treated to a lot of really well timed Armisen man-nipple. Most sketch characters in drag are funny just for the fact they are painfully awkward in women’s clothing. It’s an understatement that Armisen really commits. In fact, in nearly every episode not only Armisen but also Brownstein can be seen in gender-bending roles.

This latest season pulls out all the stops as far as guest stars go. The roster of guests is a long list of people you’d want to be friends with—friends that will play a small role in a five-minute sketch. A few of them are in blink-and-you’ll-miss-it roles, but watch for Justin Long in a May/December romance, Ed Begley Jr., Brigitte Nielsen skydiving, Natasha Lyonne selling marine mammal experiences, and Jeff Goldblum trying to hock time shares while on a date with Olivia Wilde. I squee’d in delight when Shepard Fairey showed up in a commercial for an indie-cool art supply store. The ever-funny Jane Lynch helps plan a ‘shitty punk’ barbecue for some yuppies, Parker Posey is very Parker Posey–esque in a ’70s disco afro, comedian Kumail Nanjiani shows up, and Matt Groening from The Simpsons plays himself in an epic showdown of the battle of the Barts (with an uncredited cameo from the voice of Bart herself, Nancy Cartwright). Stick around to the end and you’ll see Steve Buscemi, Breaking Bad’s Anna Gunn, both Paul Simon and Paul Reubens, and another SNL alum, Seth Meyers.

Before I was able to get my hands on the DVD set, I had seen various shorter sketches pop up on the show’s YouTube channel. The longer versions on the DVD of these little gems are totally worth watching the show in its entirety. For example, the goth couple planning their living wills was one of my favorite sketches I’d seen on the show, and that’s what got me into Portlandia to start with. The full length version takes on the YouTube clip for few minutes longer, giving it a better ending and a more realized concept. This show takes on hipsters, pop culture, counter culture and the ridiculous American middle class. We’re all up for ridicule, and we’re all in Portlandia. Whether you’re a fan of this show or not, you will be by the end of the two disc set, and you’ll want to own it so you can watch it over and over again.