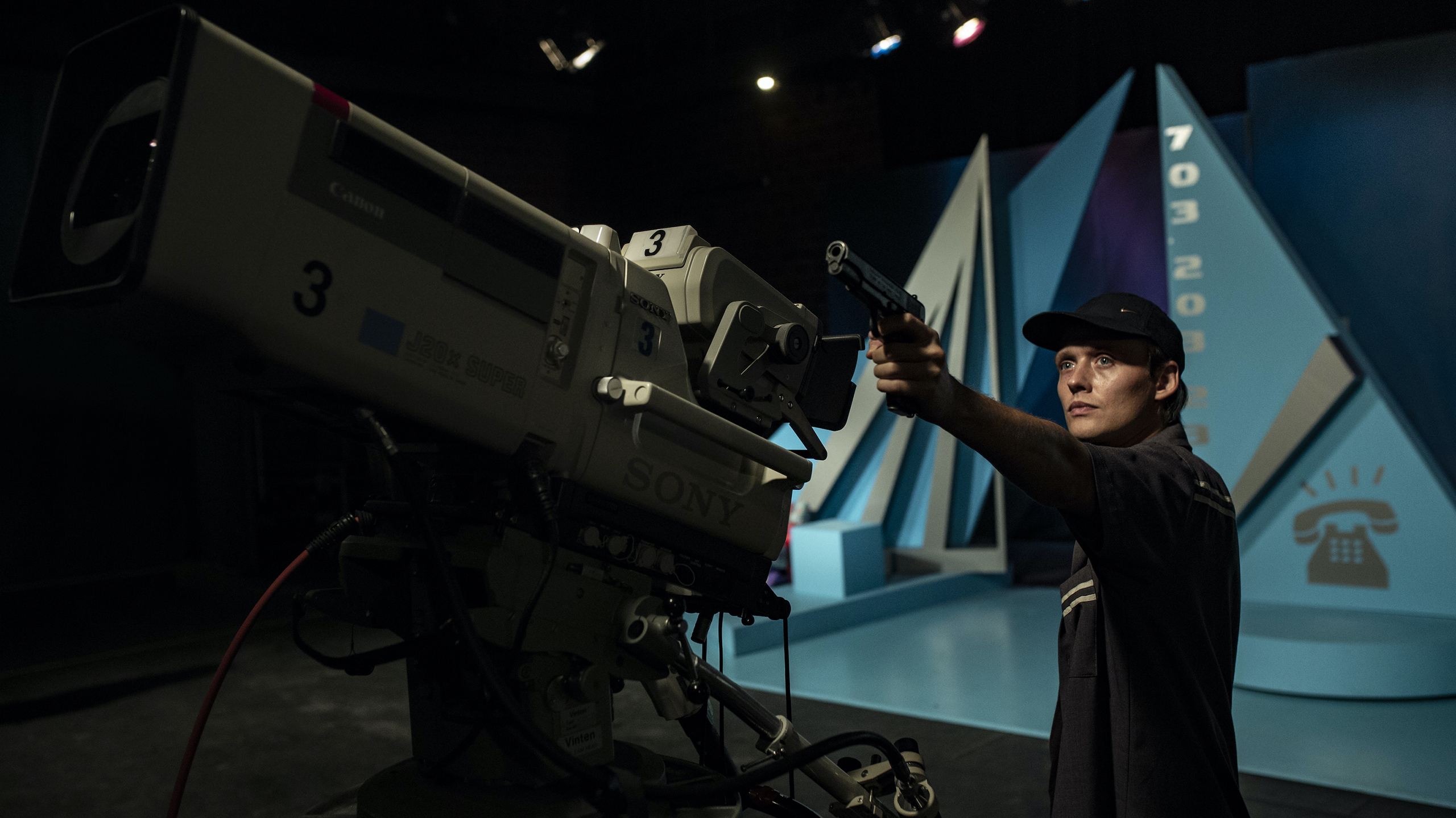 In 2016, Jodie Foster set out to “bring back the grown-up summer movie” with Money Monster, the story of a desperate young man who walks into the taping of a television show and holds the host hostage on air. The movie failed both at the box office and with critics, because it was an overwrought mess that was trying to say way too much in the space of just over two hours. While Jakub Piątek’s new film Prime Time has a setup that’s almost identical, it succeeds where Foster’s film failed, and at just a fraction of the budget and only a 90-minute runtime by simply focusing on the story.

Prime Time takes place in Kraków, Poland, on New Year’s Eve in 1999. As a new millennium is being ushered in, television personality Mira Kryle (Magdalena Poplawska, 53 Wars, Rain) is beginning a broadcast. 20-year-old Sebastian (Bartosz Bielenia, Corpus Christi), storms in armed with a gun, hijacks the studio and takes Mira and a security guard named Grzegorz (Andrzej Kłak) hostage. But what is the gunman’s plan?  No one seems to know, including Sebastian himself. His demands to deliver his message, whatever that may be, via live broadcast is repeatedly thwarted by an uncertain police force and an egotistical network chairman. As the night wears on, Sebastian and the hostages bond in unexpected ways, while those in power fumble to restore order, and it ends up being a night that none of them will ever forget.

Prime Time is a small film shot on a modest budget, but Piątek does an impressive job of making it feel bigger than it is, and of building the claustrophobic suspense to a crescendo. An important part of this success is the performances, and Bielenia is a genuine superstar in the making, with an intense presence and a face that have me believing that America and Hollywood are going to snatch him as soon as possible—he’s just so disarmingly charismatic. Poplawska may actually give the more nuanced performance, however, and I found her to be so captivating that I’m going to have to seek out more of her films. A lot of credit for how well the movie works must go to veteran editor Jarosław Kamiński (Ida, Cold War) whose expertise lifts the entire film up by several notches.

The screenplay by Piątek and Łukasz Csapski is smart, focused and to the point, with strong dialogue that focuses on believability over quotability. It makes a nice statement about the cynicism and opportunism of the entertainment industry without pounding you over the head or getting up on any soapboxes. The setting of the eve of the new millennium, done in a historical context, is intriguing and effective, but it made me feel old, so damn all of these people.

Prime Time isn’t profound or groundbreaking, but it’s not trying to be. It’s simply an exceptionally well-crafted and engaging thriller that goes beyond language barriers, and it’s a riveting piece of entertainment that kept me hooked until the very end. –Patrick Gibbs