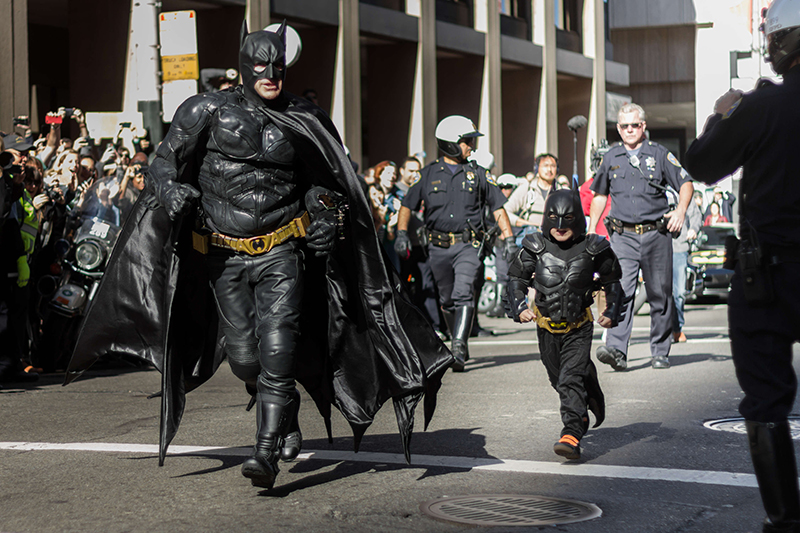 For those who may have been living under a rock in 2013, the Make-A-Wish Foundation teamed up with the city of San Francisco to grant the wish of then five-year-old Miles Scott who had spent most of his childhood battling leukemia. Like many of us, Miles wanted to be Batman, and for the thousands of people involved with making his wish come true, he became a symbol of the immense good that humans can accomplish when they have something pure to unite them. What began as an honest effort to do something good in the life of Miles eventually snowballed into a worldwide event that brought people closer during a time when status quo seems to be about driving them apart.

Batkid Begins documents this rare moment in human history, allowing viewers to get closer to the stories of Miles, his family and the many other people who decided to rally around this idea to make a little boy’s dream into a reality. For those following the news coverage, it was obvious that a ton of planning and organization went into this event, and the documentary delves deeply into that process. Throughout the entire organizational effort, nobody laughed it off or refused to help. Nobody said that they were too busy or that it was a waste of resources. In a weird, telepathic way, it was almost like the people involved knew that the whole process would become something bigger than themselves.

Cinematically, the adventure of Batkid Begins is filled with imagery that kicks the feels into overdrive. Seeing Miles and his family respond to the huge amount of support that comes in from all over the world is beautiful, and it’s a blast to watch the core event organizers merrily stressing out about the minutiae of planning a citywide event that includes saving a damsel in distress, stopping the Riddler from robbing a bank and rescuing Lou Seal, the mascot for the San Francisco Giants from the Penguin. Instead of being overly didactic by using the content as a platform for any number of different agendas, Batkid Begins simply chronicles the event’s meteoric trajectory. It’s a stripped down documentary—its soundtrack and editing only serve to bring the viewer in for a filmic hug during a few choice moments along the way.

I was a little disappointed to see that the DVD doesn’t come with any special features. It would have enhanced the experience to see some extended interviews or a few additional tidbits about the planning process. Regardless, this is the type of documentary that is necessary viewing for anyone who has given up faith in humanity. It doesn’t really need to do much more than photograph and present the story of Batkid and all of the generous people that were involved in turning a small bit of fantasy into reality.

Batkid Begins succeeds in capturing the universal appeal of this event. Not only is the documentary evidence that cultural icons such as Batman still have the power to connect people on a profound level, but it proves that people can be expected to do great things if the opportunity presents itself. While the event only lasted for one day, it was a day in which the world stopped worrying about terrorists, political agendas, intolerance and Kim Kardashian’s ass and focused on watching a little boy live out a dream that all of us have had at one time or another. When most people’s daily news is dominated by all of the sick and callous things that humans are doing to one another—especially as presidential election season starts to creep into focus—Batkid Begins is a cathartic viewing experience. It’s tough to watch Miles Scott pumping his little fists in the air as he drives through San Francisco as the Caped Crusader without appreciating people’s potential to be awesome.