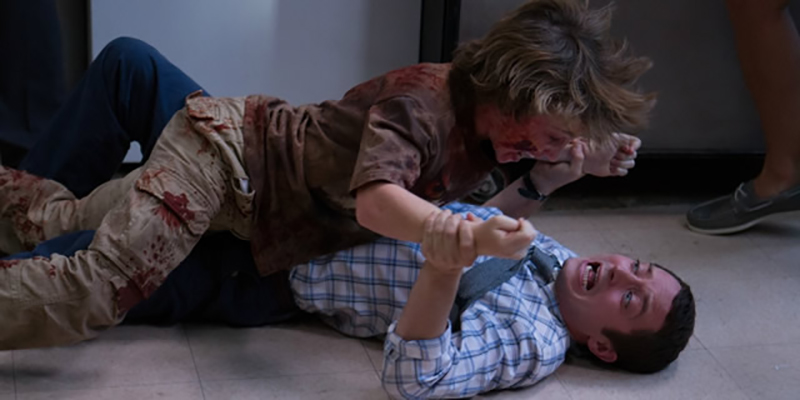 With a fantastic intro reminiscent and eerily similar to the first season of American Horror Story, my initial hopes for this zombie black comedy starring Elijah Wood were high. After a child ingests a rotten chicken nugget in a school cafeteria in the small town of Fort Chicken, a rabid virus soon spreads through the hallways, infecting only the pre-pubescent attendees. To endure the chaos, Clint (Wood) unfortunately happens to be substituting and must survive the ravenous hellions with the regular staff, which includes his high school crush (Alison Pill) and her boyfriend/gym teacher (Rainn Wilson), among others. What starts out with promise soon spirals out of control, with major inconsistencies in tone and character development. At times, I can’t tell whether directors Jonathan Milott and Cary Murnion were offering a raunchy black comedy or a serious zombie flick. Also, the random side plot with Jorge Garcia (Hurley from Lost) as a drugged-out crossing guard sitting in a van has no payoff and is completely unnecessary. While the film clocks in at 96 minutes, it feels twice as long with multiple dry spells and poorly developed one-liners. –Jimmy Martin