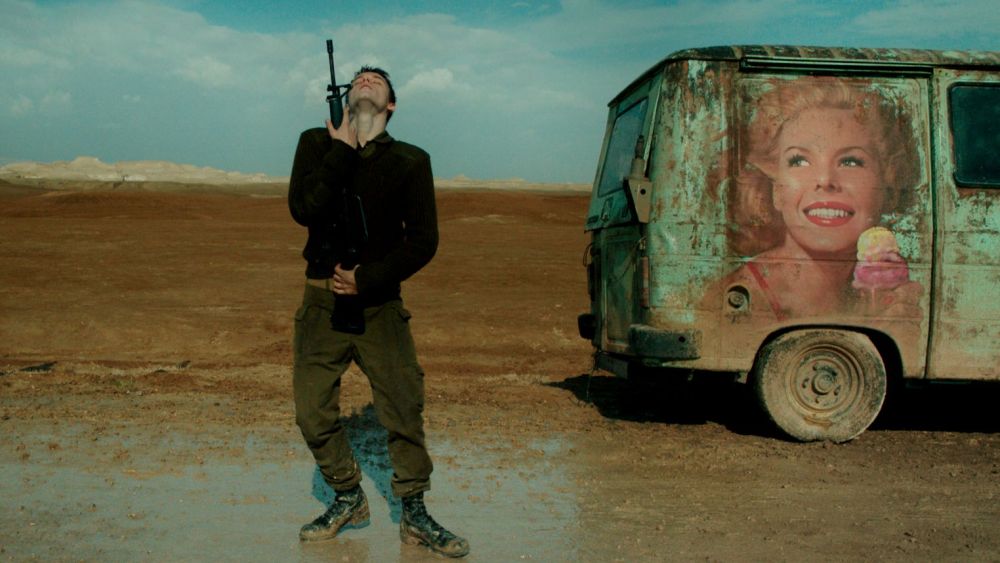 Rife with metaphor, Samuel Maoz’s Foxtrot traverses grief, black comedy, irony and surrealism to present a triptych of contemporary Israel. In the opening scene, Daphna (Sarah Adler) opens the door and screams, seeing Israeli soldiers and knowing they bring news of her son’s death. The soldiers are well-practiced and make quick work of tranquilizing the bereaved mother. Later, Daphna’s still-stunned husband, Michael (Lior Ashkenazi), listens as a soldier somewhat blithely discusses details for his son’s funeral. Most of this first part plays out as a bleak chamber piece. Michael is boxed in: emotionally, by his mute anguish; physically, by his well-to-do apartment, a stage-like set that visually reaches the point of optical illusion. The ever-exacting shots are as oppressive as Michael’s grief, fixed in overhead, God-like frames before narrowing into close-ups as Michael burns his hand under a scalding bathroom faucet, yells when the army refuses to disclose specifics about his son’s death, or sits despondently in his son’s room. (Notice what appears to be a splatter of red paint on the wall, directly behind Michael’s head.)

Such meticulous and metaphoric shots further bloom when we reach the second part of the film, which follows Michael’s son, Jonathan (Yonatan Shiray). He’s stationed at Foxtrot, a desolate desert checkpoint, where he lives with three other young guards in a dingy trailer that’s sinking on one side, tipping—moral equilibrium in quagmire. Off duty, Jonathan spends his time drawing while the others listen to music or play first-person shooter games. On duty, they wordlessly, dourly scrutinize and sometimes humiliate the few Palestinian travelers who come their way. In this godforsaken land pervades a stale yet insidious sense of futility, of cruelness, but interspersed are moments of technicolor absurdism: A camel leisurely passes through; Jonathan’s drawings come to life; a soldier vivaciously dances with his gun, doing the foxtrot—a box step in which the dancer begins and ends in the same place.

The third part of the film returns to a coping Michael and Daphna, some time after their son’s death. Foxtrot’s three acts are tonally distinct, each bringing their own lurching plot twists, each grim or violent or (bleakly) humorous in their own ways. But the final chapter becomes oppressive in its reality, and however Maoz employs the hypnagogic and the hyperreal, he asks his audience to ponder war and borders—and what it means to live within a militarized, traumatized world. –Kathy Rong Zhou