SLUG Mag Soundwaves
Episode #392 – Homephone
00:00 / 17:29
Spotify Stitcher
RSS Feed
Share
Link
Embed
If you don’t know the name Blauvelt by now, you must be a cave dweller. Since coming out of Vermont (my old stomping grounds), Jake has established himself as one of the best all-mountain riders in the world. 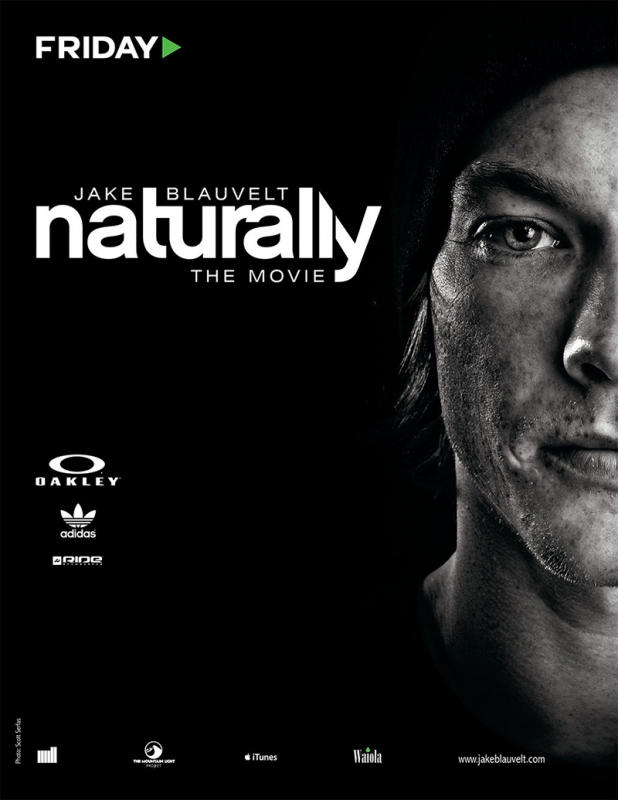 It’s been a long, long, hot summer. Most of my time was spent trying to cool off in our parched reservoirs, seeking some sense off relief. Luckily, it looks like winter’s coming ahead of schedule when on Tuesday, Sept. 25, we saw our first snowfall. As I daydreamed of powder, I received an invite to the premiere of Jake Blauvelt’s Naturally. Naturally, I had to go.

If you don’t know the name Blauvelt by now, you must be a cave dweller. Since coming out of Vermont (my old stomping grounds), Jake has established himself as one of the best all-mountain riders in the world. In his first self-titled documentary, JB ditches the park and the streets and focuses solely on the steepest terrain, deepest snow, and perfect natural features. Backed by his main sponsors Adidas, Oakley and Ride, JB and a few select friends scour the globe, including untracked parts of interior British Columbia, in search of the “endless winter.” The film also introduces Jake’s newly formed non-profit organization, Mountain Light Project, which allows kids to pursue their dreams of a snowboarding career. What follows is a must see for any snowboarder who loves the backcountry and can respect how amazing Mother Nature can be (not to mention supporting a member of the snow community that is … well, supporting the snow community.)

The film plays out as very Warren Miller-esqe: multiple camera angles, voice over commentary and a pretty standard mixed rock/electro soundtrack. Although the music fuses with the riding seamlessly, it was almost forgettable. I was more immersed in the visual stimulations, and had to take notes of the credits to even remember what type of music the film contained. Producer/Director Greg Martin does a good job of translating the commentary into some sense of a story, but after watching The Crash Reel, about Kevin Pearce’s near death brain trauma, I have little sympathy for a blown shoulder, and the montage of JB’s “rehab” was a tad cheesy and a touch overboard. The injury subsequently led this film to being a two-year project and played into a redemption storyline.

Despite some minor flaws in form, I thought this film was amazing! The riding is incredible, the scenery beautiful, and the “story” engaging (despite being rudimentary). If I had to take one thing away from this film, it’s the importance that nature plays in our community. Without the mountains, snowboarding wouldn’t exist and neither would these opportunities for us (as snowboarders and general persons alike) to discover what is really offered out there in the world. I would absolutely recommend this documentary to anyone who has ever stepped into a pair of bindings and felt the glide of crystallized water molecules under their feet. As I left the theater, I felt extremely jealous of the riders in the film until I inhaled a deep, cold breathe of that Utah air and reminded myself that I am blessed to be surrounded by and waiting on the “greatest snow on earth,” and can’t wait to get out and explore it.

Jake Blauvelt Naturally – THE TRAILER (2013) from Friday on Vimeo.