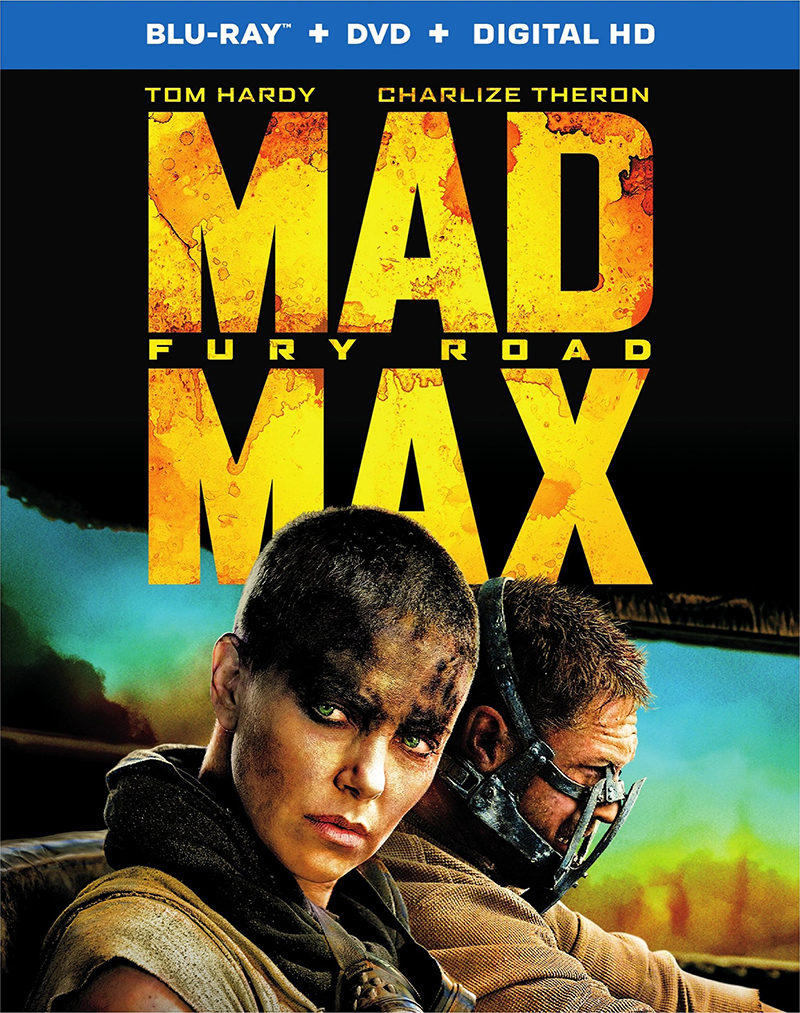 The first time I saw this film in the theater I felt like I needed to go home, take a shower, check my body for injuries … and then go right back to the theater and watch it again. George Miller‘s Fury Road had critics pulling their hair out over how great it was, both as a story and as a work of cinematic art. For those of you who haven’t seen it yet, the film rejoins everyone’s favorite road warrior, Max Rockatansky (Tom Hardy), still wandering the post-apocalyptic planes of a dystopian Australia. After being captured and turned into a blood bag by the War Boys, he finds himself in the middle of a chase after Imperator Furiosa (Charlize Theron) helps the forced wives of Immortan Joe escape and head for the “Green Place.”

Within minutes, armies from the Citadel, Gas Town and Bullet Farm race after the groups through hellish landscapes and an almost never-ending fight to make it out to the other side. Without spoiling any of the major points to the ending, no one truly comes out of this the way they went in, with tons of death and action that will either leave you in a cold sweat or giggling for more—maybe both! But one of the best aspects to the film is watching the traditional leading man role for Max take a side step and almost become a sidekick to Furiosa, who truly leads the story and owns everyone who crosses her path.

Now, just a few months after the film took moviegoers by storm, Warner Bros. gives us the Blu-Ray/DVD package set. For the quality of what you’re getting, it looks and feels even better at home—awesome sound quality that picks up stray bullets and explosions from afar that you may have missed sitting in a theater. Great care was taken to assure that the thrilling ride you experienced the first time around translates beautifully onto your home watching. But that’s expected, the real decision making beyond that lies in the special features.

For this particular release you’re given an array of featurettes that focus on behind-the-scenes materials. There’s one on filming the movie, a focus on all the cars used in the film and their construction and appearance, a look into the characters of Max and Furiosa and their interactions together, an examination of the tools used in this wasteland, profiles of the wives who are looking to escape, a feature focused on the action sequences and, finally, deleted scenes. All of these are pretty cool, except for the deleted scenes, of which there are only three and their total screen time equals less than four minutes. Another disappointment to the features as the rumored “Silent” and “Black & White” cuts of the film, the latter which Miller himself said was the best cut, but neither made it to the film. Another missing element: audio commentary! Miller gets to make this film after years and years of waiting and he’s got nothing to say? Not even the cast?

So, two big questions to be answered: First, is it necessary to know the series before watching? Not really. The film does have very brief references to previous events, but nothing that’s going to make you wonder what the hell happened. They’re there for longtime fans to get a kick out of, and if you don’t know what they are, it’s not going to ruin your experience. And second, is it worth the purchase? Absolutely! Even with all the missing material that would have made this a killer release, the film itself is totally worth the buy. Just be ready to take a shower when you’re done watching it again.