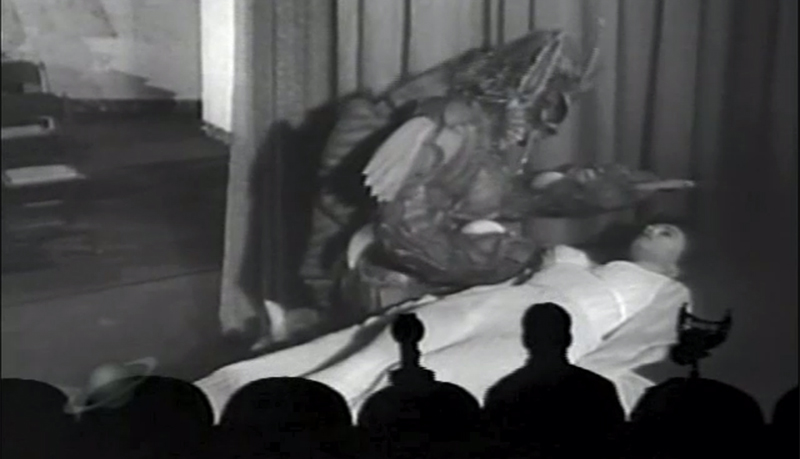 You wanna make some nachos?

If there’s ever a time to be an MST3K fan, aside from when the show was actually on the air, it’s now. Along with seeing a great resurgence in the fanbase from finding a new audience online with their own YouTube channel, the show is seeing a revival through crowdfunding for brand-new episodes. At the time that this is being written, the show has raised $3.3 million through Kickstarter to make six new episodes with an entirely new cast (including Jonah Ray, Felicia Day and Patton Oswalt). Add in the excitement of how RiffTrax is still soaring high through their recorded tracks and Hulu specials, and that’s a ton of classic and modern riffing that has to be bringing smiles to every fan’s face.

The icing on the cake for fans this year is the latest release from Shout! Factory as they bring us the 34th volume of MST3K episodes, presented in their original awesome glory from Comedy Central and the Sci-Fi Channel to your home collection. Splitting it down the middle for two Joel-hosted films and two Mike-hosted films, the selections from this collection include Viking Women and The Sea Serpent (also known as The Saga of the Viking Women and Their Voyage to the Waters Of The Great Sea Serpent), War of the Colossal Beast, The Undead and The She-Creature.

Of the four from the collection, War of the Colossal Beast seems to stand out the most as one of the greatest examples of MST3K picking and riffing. The film mixes early green-screening effects, with cars rolling along in the original footage followed by the legs of a large woman walking right behind them as a cheesy effect—all topped off with one-liners like “Big Men Wear Hanes” and “Nice Gams” from the bots and their creator.

While the films themselves are always fun to own, the real fun from the DVD pack comes in the bonus footage. This set comes with brand-new intros from Frank Conniff, trailers for the films and the always fun artistic inserts for all four packages from artist Steve Vance. But the real gem this time around is “It Was A Colossal Teenage Movie Machine: The A.I.P. Story.” American International Pictures basically made tons of low-budget films between the ’50s and ’70s, famous for films like House of Usher, The Haunted Palace, The Raven and more. Much like studios of its time, ideas were plentiful and funding was sporadic, which led to a lot of quick films turned around for viewing audiences who were keen to spend their nights in double-features. The story of James Nicholson and Samuel Arkoff’s company is an interesting one, as their main focus was on teenage audiences who were usually the first to spend whatever cash they had for a night at the movies. The company created films for a built-in audience and yet somehow were just not able to sustain it, learning a whole new set of lessons in a medium with an ever-changing dynamic.

The overall impression I got from this collection is that we’re now starting to find the secret greats from the MST3K library. Oftentimes, you’ll find a collection with a mix of great choices and mediocre efforts. Not every episode can be great—that’s just a fact of television—and MST3K is no exception to the rule. But after over 30 volumes at our disposal, we’re starting to get down to the nitty-gritty of their tome and finding a lot more episodes that are so well-balanced in humor and ridiculousness that they’ve actually aged well with time. They may not be the immediate choices that come to mind when you think of the series, but they definitely carry the spirit well beyond their purported expiration date. –Gavin Sheehan