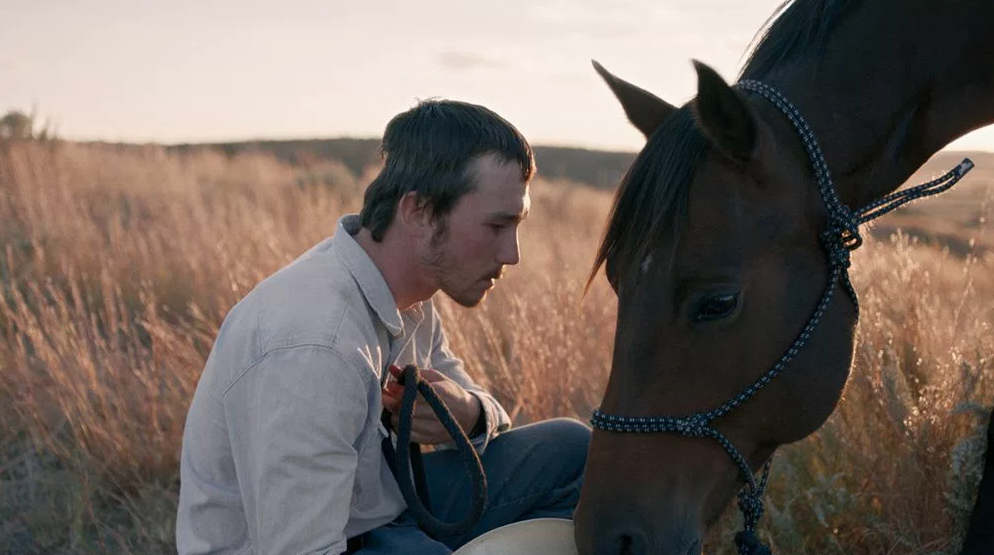 Melding fact and fiction, Chloé Zhao’s second feature film, The Rider, remains on the Pine Ridge Reservation to paint an aching portrait of rodeo cowboys among the Oglala Lakota Sioux community. Remarkably working with the locals as her cast and partially basing the film on the actors’ real lives, Zhao crafts her stunning, precise storytelling with nuance and solicitude. Her filmmaking style translates into poetry the documentary and docufiction, the contemporary American regionalism and realism, the landscape and light, the mythic Midwest.

“No more rodeos and no more riding” are the doctor’s orders for Brady Blackburn (Brady Jandreau), a lean and talented rodeo rider and horse trainer who suffered a severe head injury after falling off a bronco. At the beginning of the film, he gingerly removes the staples in his head to reveal a long, stitched-up laceration on the side of his skull, before he wraps it carefully in plastic wrap to take a shower. However restrained and reticent, it’s clear that Brady is waiting to ride again. He lives with his sister, Lilly (Lilly Jandreau), who is autistic, and his father, Wayne (Tim Jandreau). He spends time around the campfire with his friends, fellow cowboys, as they reminisce, almost in prayer, about the rodeo. He practices lassoing and gunspinning, and he visits his mother’s grave, a white cross amid the endless Dakota plains. When money gets tight, Brady picks up a job at the grocery store. Always, he visits his friend, Lane (Lane Scott), a brother and legend of the rodeo who, after an accident in the ring, is paralyzed and unable to speak. The two watch Lane’s old bull-riding videos and chat, with Lane spelling out words, letter by letter, in ASL (“Don’t give up on your dreams”).

Brady hasn’t given up, but as the film progresses, he wearies, struggling to grapple with his stripped ability to ride. (An ongoing symptom of his brain trauma—and perhaps the closest element to literary metaphor that Zhao employs—is a mini seizure, which clenches Brady’s right hand into a fist, locking him onto whatever he’s holding.) When Brady encounters a friend’s wild horse that needs taming, we watch, entranced, as he both firmly and gently coaxes and leads the horse until it eventually allows him to ride. It’s an astonishing, palpable, true sequence that drives home the sense of loss, meaning and identity—and at last, healing—that Brady endures. –Kathy Rong Zhou