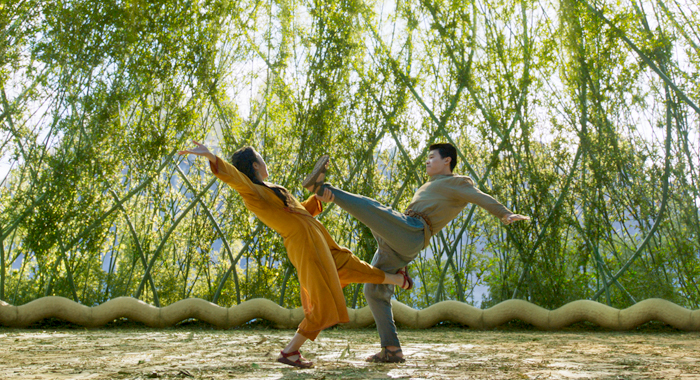 Film Review: Shang-Chi and The Legend of The Ten Rings

Shang-Chi and The Legend of The Ten Rings
Director: Destin Daniel Cretton

I know that I risk incurring the wrath of many by saying this. But before Loki was over, I found that the onslaught of new content this year had officially overcompensated for 2020, and I was Marveled out. I’m not saying that I disliked any of it—I actually liked all of it—but it was, once again, time to take it for granted as streaming steadily and to say, “Yeah, but what else is out there?” That’s why I was so pleased that Shang-Chi and the Legend of the Ten Rings brings some new flavor to the formula.

Shaun (Simu Liu, Kim’s Convenience) lives a simple life in San Francisco, where he works at a hotel parking cars for a living, along with his best friend, Katy (Awkwafina, The Farewell, Raya and the Last Dragon). He’s perfectly happy with a quiet life. But when Shaun and Katy are attacked by members of an ancient and dangerous organization called the Ten Rings, Shaun must drop the act and reveal himself as Shang-Chi, a great warrior with a mysterious and morally complex past that he must now face. He must also face his estranged sister, Xialing (Meng’er Zhang), when they are drawn into the web of the Ten Rings, and its leader, Wenwu (Tony Leung, Red Cliff, The Grandmaster), who also happens to be our hero’s father.

Shang-Chi and the Legend of the Ten Rings plays as much like an Indiana Jones–style adventure movie. It’s filled with kung fu and narrow escapes for the first half, per being a Marvel movie, and it’s exhilarating and insanely fun. If only Snake Eyes: GI Joe Origins had come with half the sense of humor that Shang-Chi possesses, it might have had franchise potential.

In the second half, Shang-Chi gets a bit more Marvel-heavy, with the magical elements front and center, but it still keeps that fresh, hero’s-journey, origin-story feel that makes it so enjoyable. As great as the past few MCU movies have been, going smaller and letting us get to know a new hero who’s focused on a story of his own rather than world-building and major series arcs is something that I really needed. Liu is charming and commanding in the title role, a mixture of tough and vulnerable that director Daniel Daniel Cretton (The Glass Castle, Just Mercy) has said drew from Matt Damon in Good Will Hunting.

But Awkwafina, who is fast becoming the most endearing performer in Hollywood, manages to be funny, lovable and even more enchanting than the mighty Michelle Yeoh (Crouching Tiger, Hidden Dragon, Gunpowder Milkshake), who appears as Shang-Chi’s aunt, Jiang Nan. Leung is quite effective as the villainous Wenwu. And there are a couple MCU supporting players who add a lot to the film, and chances are that you’ve heard about them already, but I’m still not going to mention them by name because, if you have the opportunity to be surprised, then you’ll owe me a favor, which I will someday cash in when you least expect it.

As far as any controversies regarding portrayal of Asian culture, stereotyping and the concerns raised by the fact that the infamously racist character of Fu Manchu was originally Shang-Chi’s father in the comics decades ago, please see the film before judging it. It’s not claiming to be 100% authentic to Asia any more than Wakanda is to Africa, but it’s respectful and empowering. For me, Shang-Chi and the Legend of the Ten Rings is a movie that I will probably watch more times than the last few films put together. I couldn’t have been more satisfied with how it turned out, and yes, I am jonesing for Eternals this November. –Patrick Gibbs