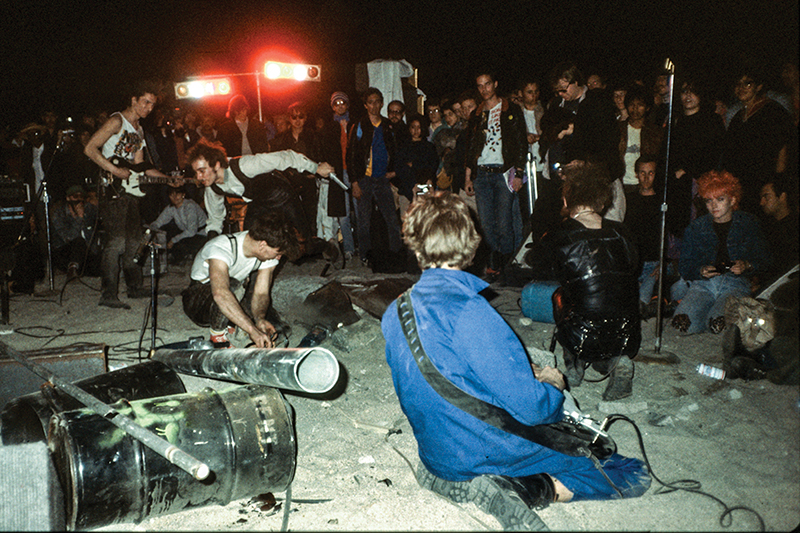 This year, the Slamdance Film Festival will debut Desolation Center, the story of the early iconoclasts of DIY culture and the roots of modern, outdoor music and performing-arts festivals. Desolation Center introduces the audience to the punk pioneers at the fulcrum of inclusive music and art. Among the rancor of early ’80s Los Angeles, founder and producer Stuart Swezey and his historic cohorts produced a situationist, anarchist fantasy forged in the desolate Mojave desert, lending to its moniker. The film intersperses anecdotal interviews from the core characters of the era, along with footage of the gatherings in their raw glory. Interviews and videos featuring the likes of Black Flag, The Screamers, Sonic Youth and Survival Research Laboratories’ Mark Pauline round out the roster in this wild documentary. Desolation Center served as a seed for soaring successors Burning Man, Lollapalooza, Coachella and beyond.

“Slamdance will be Desolation Center’s U.S. premiere,” says Mariska Leyssius, one of the original Desolation Center volunteers who appears in the film. “In this era where festivals are a bigger thing than the groups themselves, people are seeing this as a radical call to rethink how live music is being presented. What we will do is link these early desert events to today’s music fests so filmgoers and music fans can see the development of these type of events and understand where the roots grew from.” She recalls her first encounter with Swezey and the inception of Desolation. She says, “I met Stuart outside a small club called the Anti-Club in Hollywood. I was selling my fanzine, Contagion. We hit it off immediately.” Back then, if you had similar music tastes, it was inevitable that you would see the same people out three to four times a week. The early ’80s was certainly a vibrant time for music.

The film’s rough footage of the most daring and dodgy moments of Desolation show some of Leyssius’ fondest memories, including when industrial rebel Pauline took over. Leyssius says, “The sun was just going down at the Mojave Auszug show when it was announced that Survival Research Laboratories was going to blow up the side of a mountain. I noticed that Perry Farrell had climbed up said mountain. We all started yelling at him to come down, but he thought we were waving at him. He kept waving back. Alas, both the mountain and Perry survived!” Moments like this are richly woven into the film as it recounts the three primary venues that made up the short and singular Desolation Center series.

Swezey narrates the documentary through crackling and faded footage of spiky, colorful youths boarding clandestine buses and a rented boat. Watching the film, one can observe the striking familiarity in both the look and sentiment that young ’80s punks forged for today. “There are certainly some parallels between the reactionary Reagan era of the Desolation Center shows and the administration today,” Swezey says. “In a time like this, it’s very important to be politically active and aware, but there is also a need to express culture in new ways. In the words of P-Funk founder George Clinton, ‘Free your mind, and your ass will follow.’” His collaborators and their circles would subsequently form the strange roots of the outdoor festivals of today, though the transformation over the years has been complicated. “Burning Man started in an extremely idealistic and unfettered way,” says Swezey in reflection on the progeny of his three Desolation gatherings. “The playa where it takes place is even farther from civilization than where we put on our events, and the whole concept was not about making a profit. It was more of an experiment in living in a more playful and surreal way, even if it was just for a few days out in a barren setting. I see early Burning Man as being a direct spiritual descendent of Desolation Center.”

The spirit of Desolation Center hasn’t died, even amid contemporary ultra-commodification of music festivals. Swezey says, “There are people from the Desolation Center shows that are still doing amazing work today, like Mike Watt of The Minutemen, Thurston Moore of Sonic Youth and Michael Gira of Swans, who have evolved in interesting and original directions. The Dark MoFo Festival that happens every year at the dead of winter in Tasmania has a similar aesthetic of the Desolation Center shows but on a bigger scale and equally bigger budget.”

The soul of Swezey and his cohort’s gatherings was imbued with connection, intimacy and tribal momentum, perhaps reflective of the isolation and desire for community that underpinned underground culture. Swezey reflects on the larger impact that he’d imagined Desolation Center would have on society. He says, “I think at first that I thought if everybody listened to the kind of music that I liked, the world would somehow be transformed, which is obviously pretty naïve … but the idea of DIY is a pretty great approach to life.”

Desolation Center, as an historical event, became a living, breathing celebration of creativity and connection on the edge of all things natural, musical, humanist and post-industrial society. The film crescendos with dark, washy, hypnotic footage of the West Coast premiere of Sonic Youth and the primal and percussive power of Einstürzende Neubauten sharing in a shamanic trance with the circle of onlookers. The film finishes with a powerful encapsulation of the healing, clarifying and transcendent potential of the gathering of minds and hearts in nature set to sound and fury. Check slamdance.com for more information on Desolation Center’s debut.