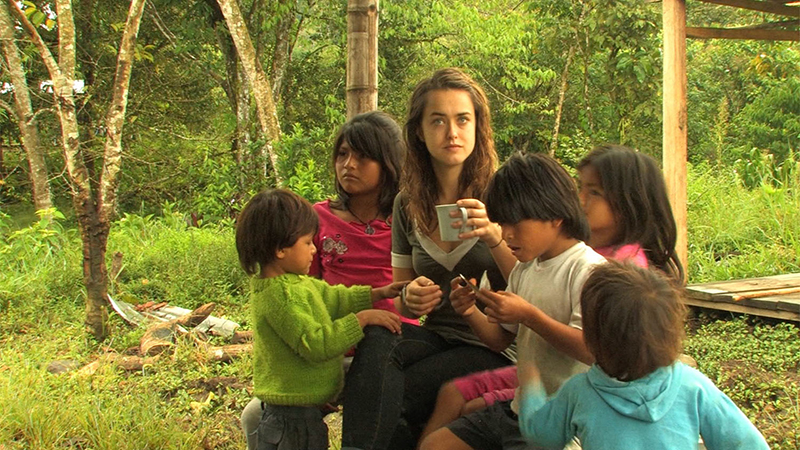 Non-historical documentaries put so much faith in the unknown. Entering a situation with the hopes that it yields filmable, watchable material turns a blind eye toward the countless opportunities for derailment or strange turns of events. Thus, in the event of the unforeseen taking over a filming, directors are left to pick up the pieces of a shattered concept and form a new story. In Circus Ecuador, the debut project by filmmaking team Ashley Bishop and Jim Brassard, an innocent (arguably naïve) project turns into the exact opposite, creating a story that seems barely believable, though the documentary’s subjects constantly assert the unnerving reality of these events.

Circus Ecuador begins with a serene, almost boring background: an inspired young adult from a visibly well-to-do community partners with her somewhat progressive church to raise money and fund a program that builds schools in third-world areas. Elizabeth, the project head, hires Bishop and Brassard to create what the pair frequently refer to as a “feel-good documentary” about helping the needy. The resulting film, however, is scarcely about the benefits of charity work. Instead, Circus Ecuador exposes the problems and tensions within these projects, both for the workers and the affected communities. Once the group gets to the Shuar region in the Ecuadorian jungle, countless layers of danger, corruption and deceit take over their project, slowing and sometimes halting construction on the school. Cut down from 80 hours of footage, Circus Ecuador does the best it can to articulate exactly what stress and turmoil this project put Bishop and Brassard through.

Besides Elizabeth, who becomes so enamored with her own good deeds that she often seems to willfully ignore the situation around her, the documentary’s main subject is Greg. Equal parts passionate and level-headed (and with a seemingly endless supply of Grateful Dead apparel), Greg places himself as the antithesis to Elizabeth. He’s frequently paranoid about the threat of death and attempts to warn Elizabeth of the danger this area presents in relation to colonialism, government corruption and financial dishonesty.

Since Circus Ecuador’s story unfolds for the characters at the same rate as it does for the viewers, the real-time development is the documentary’s defining characteristic. The resulting effects are mixed, flirting between an eerie realness and an apparent case of missed opportunities. The moments where the project volunteers slowly uncover just how twisted their mission has become are often jaw-dropping, especially once government workers and private parties from all around the world involve themselves.

Still, the plot and direction are sometimes questionable. Especially toward the documentary’s conclusion, the presentation of the plot seems a bit muddled, even given the circumstances. Bishop and Brassard can’t be expected to make up information to fill in the gaps in their own knowledge, but the sense of hurried resolution doesn’t match the multiple conflicting stories. Further, as Bishop points out in the final moments of the film, there is an unwelcome favoring of the project’s internal problems and anxieties, almost completely failing to acknowledge the issues the situation revealed within the Shuar community.

Aside from these small errors in using real-time documentary filming, Circus Ecuador is one of the strangest, most intense documentaries in my recent memory. Through the run-ins with countless gold-seeking parties, ayahuasca ceremonies and threats of murder and sex-trafficking, the story in Circus Ecuador often becomes so outrageous that it becomes surreal. It may not have been the story they wanted to tell or the story they could’ve told, but Bishop and Brassard have told a potent, unforgettable story nonetheless. –Connor Lockie