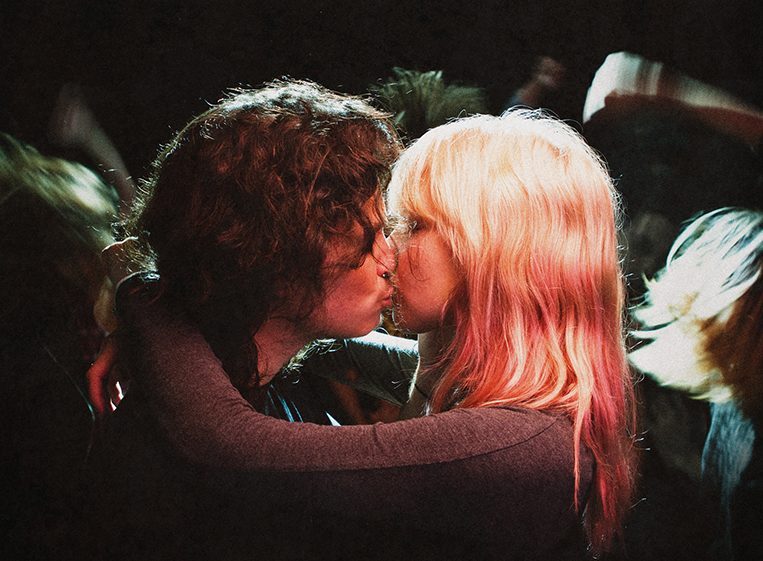 Opening with a confusion of racing cars and yelling to a black background, the first actual scene of Le Faux Tatouages is of brooding, angry teen Théo (Anthony Therrien) wearing a Dead Kennedys T-shirt, being carded at a convenience store while buying his first pack of beer on his 18th birthday (the scene is set in Montreal). When the next scene cuts to Théo chugging the beer in an alleyway before a concert, the course of the rest of the film becomes almost immediately apparent. Enter the manic pixie dream girl: the beautiful and carefree Mag (Rose-Marie Perreault), a blonde, Cherie Currie type who digs the same punk bands as Théo but isn’t afraid to admit that she listens to Beyoncé at the same time. Théo is initially reluctant to engage Mag in conversation and is defensive when she calls him out on his fake tattoo, though her interest is more in praising the intricacy of Théo’s artwork rather than criticizing the fact that he drew on his tattoo with his mother’s eyeliner. Cue the Garden State/ 500 Days of Summer–esque love story.

What works well for this movie is the atmosphere it creates—lingering shots of Théo riding his bike throughout Montreal feel all the more real when we realize why he has a sudden distrust for cars, preferring to escort Mag to her house while she rides on the handlebars. After Théo and Mag spend their first night together, he gets back on his bike to go home, and his train of thought is almost palpable as he pedals to the end of the street, brakes hard and turns back to return to Mag’s house to get her number and entice her to spend the day with him. Therrien and Perreault have a very believable chemistry, and their interactions are charming. Their portrayal of young, punk love feels timeless and nostalgic, despite the film taking place in the summer of 2017.

The film hints and dances around Théo’s reason for his internal struggles and isolation quite well, to the point where the big reveal is at both points surprising yet makes sense with all the contextual clues. The viewer is left to come to their own conclusions about the specifics in Théo’s background, and I personally enjoyed that not everything was spelled for out for me. However, I wish Kev (Rémi Goulet) was a more fleshed-out character and that other quirks about Théo’s personality—like why he doesn’t celebrate his birthday or why he distances himself from his mother, were explored in more depth. Because the point of view was through Théo’s eyes, there wasn’t enough investigation into Mag’s background and desires. Personally, I enjoyed Perreault’s performance so much that I wished her character was a little more complex or possibly less complacent and perfectly supportive when Théo would lash out or revert to his depressive state. It almost seems as though many of her actions are to ultimately bring Théo out of his self-imposed isolation and catalyze his interest in tattooing, while her own motivations and background were just hinted at in passing but never fully explored. Story-wise, I felt that Les Faux Tatouages was delicately toeing the line on many romantic movie clichés, but the ease of Therrien and Perreault’s on-screen chemistry and beautiful imagery throughout the film left a lasting impression.