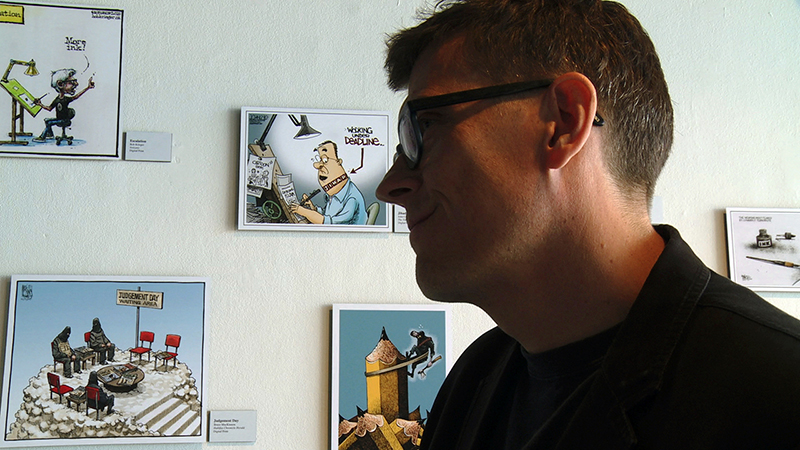 The best of art comes from the creation that follows destruction. Mr. Fish: Cartooning From The Deep End is a documentary full of raw, ugly, animated humanity that respects that tension. Full of traumatic fantasies and dark humor, the protagonist—controversial editorial cartoonist Mr. Fish—is rich with twisted imagination. Fish is sanctimonious and sarcastic, which comes forward in the film from the first frame. The greater purpose of vulgarity and fighting the gatekeepers is a question that imbues the film and its protagonist. Fish is meticulous and profoundly talented, yet seems begrudged by his calling. Vignettes of his cutting and clever work are fantastically displayed throughout the film.

Fish is a refreshing, almost accidental feminist anarchist and a loving parent and partner. His hippie anti-establishment ethos is almost a throwback to a bygone era yet speaks coherently to contemporary angst.

Fish’s conversations with colleagues and family throughout the film are honest and touching. His vague discomfort is depicted fantastically in moments of sweaty confidence and righteous indignation. The costs of his rebellion seep into his life and his work, and the film honors that struggle quietly and calmly. The death of animators as an important cultural role is addressed smartly, as well as the actual safety risks that edgy artists navigate in the modern age. Fish is simultaneously apathetic and deeply affected, a dissonance the audience will share watching the documentary.

Director Pablo Bryant gives viewers an abundance of honesty without excess, an apparent accord with his subject. Even the banal moments of managing money and lost gigs and disappointment are touching and relatable.

The nihilistic vulnerability of Mr. Fish: Cartooning From The Deep End is both charming and disquieting, an exact approximation of Fish’s art, which is not for the faint of conscience. –Paige Zuckerman