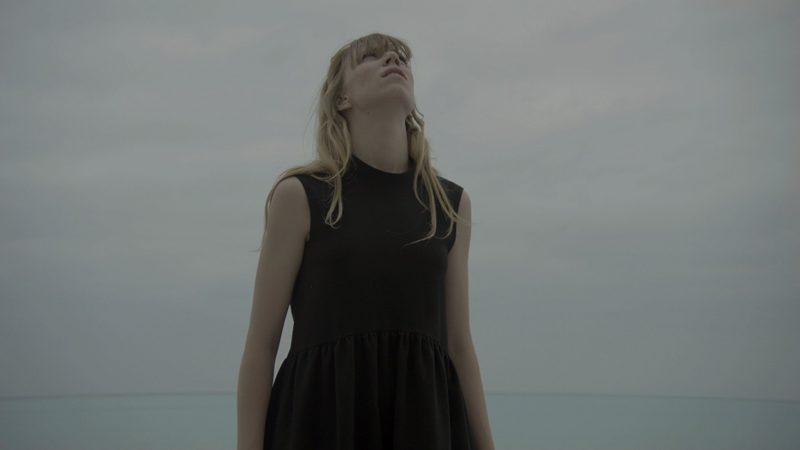 Songs in the Sun

Songs in the Sun is a movie about myths and myth-making, the movie itself a myth of sorts as it tells the story of a girl’s disappearance. Anna travels to visit her childhood friend Julie on the Danish island of Møn. Julie’s mother believes Julie is depressed, and she asks Anna to take a break from vocal auditions to visit Anna and cheer her up. What Songs in the Sun ultimately wrings from this premise is three women whose varying abilities to function rub up against myth and legend in a way that ultimately heals them, though not always in ways that seem just.

“Do you remember the legend about the Garden of the Cliff King?” Julie asks Anna as they stand together in the dense forest on Møn. “I think this is where that garden is,” she says. “They say you have to get lost to find it.” Anna has just arrived from an audition of some sort with an invitation to return on the condition that she loosens up and sings “from the gut.” She is pretty and put together in a blue sweater and skirt, necklace and makeup. Julie, on the other hand, looks disheveled and tired, wearing baggy, unassuming clothes. Despite being close childhood friends, it’s clear the two branched off at one point, finding themselves burrowing deeper into different lives. Meanwhile Anna’s mom, Sonja, drinks on rocky beaches during the day and chain smokes at night. Each woman is poised for a moment of vulnerability, the kind that strikes whether you feel it coming or not.

Julie ties Anna loosely by the waist to the trunk of a tree where she believes the spirit of the Cliff King dwells. As she blindfolds Anna, she steps back a few feet, watching Julie as she eventually panics that Anna has left her, that she is all alone in the forest, that something mystical has suddenly happened. When Julie steps back in, Anna apologizes for being frustrated but pleads with Julie to try to live a normal life, encouraging her that her depression will improve if she sets humble and realistic goals. “You think I’m just making it all up in my head?” Julie asks. “Yes,” Anna says. “Or you invent it to have some intensity in your life. I don’t think you’re insane, I just think you spend too much time alone.”

The girls eventually join Sonja on the rocky Møn beach, and we start to understand the moment in life each woman is experiencing: Sonja loves her daughter but is unable to understand her anxious existence and inability to conform. Anna has embraced adulthood and its litany of responsibilities but is unable to truly relax, and Julie has grown incredibly sensitive to the unsatisfying vagaries of life, opting to rely on the stories and myths for comfort.

When Julie goes missing, and when what seems to have happened resolves into a strange, mythic reality, you see how one person’s ability to cope with life is incredibly relative. Often each character feels defined by how differently they inhabit themselves, and the myth created by Julie’s disappearance underlines those differences. We transition into a new reality, and stories like Songs in the Sun are all about how you feel toward that transcendence. –Parker Scott Mortensen