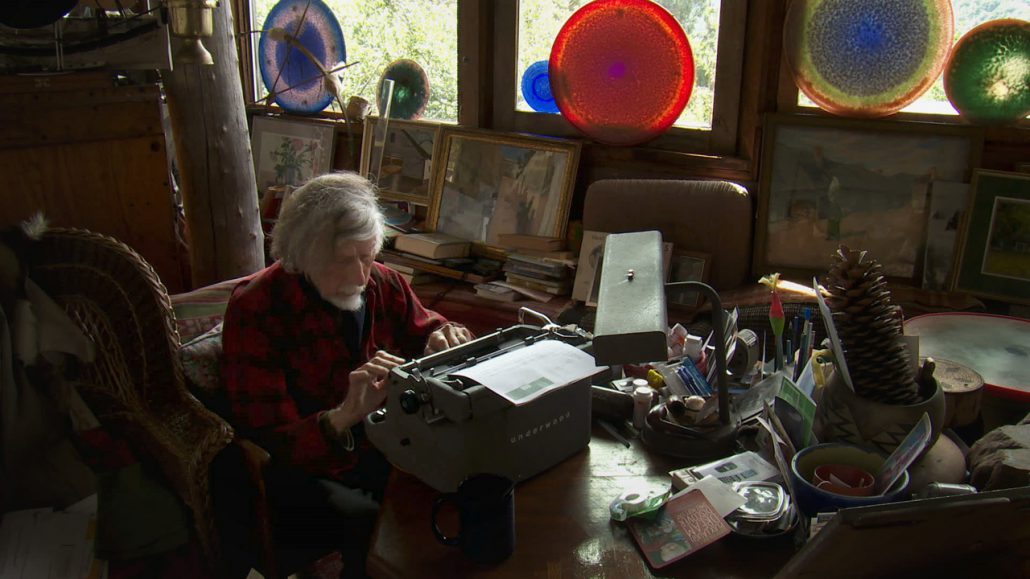 Read the synopsis for Sunnyside, a debut documentary but for a producing credit in 2015 from the writer, director Frederik Carbon. If it grabs you, watch it right away: Two very eccentric, elderly men who are quasi-neighbors and buddies in Northern California—one a sound-designer, the other an anarcho-architect—go about their business, talking everything and anything with whatever Carbon happened to catch on film. Sometimes the topic is their art and work, sometimes it’s discussing old times, sometimes it’s talking about the sounds of the forest, sometimes complaining about bills and fines, and sometimes it’s musing about life—but always, it’s about being eccentric, elderly men.

I was told in my writing classes in college that human beings are natural voyeurs. Glimpses into other lives is enough to grab people’s attention, like seeing a person in a stretcher in the back of an ambulance through the window. If we go by that definition, sure, there’s something to be watched here. It’s very much a consideration of another life that is not your own, right down to what it looks like when a very eccentric, elderly man takes a bath in a bucket outside his front door. Cue the snickers, but that’s not what I’m going for. I’m not critiquing the piece for presenting a naked 90-year-old in the bathtub. What I wonder is what it was going for by doing this. The audience never gets much of a sense of place. We can’t really tell how close they live to each other or how far they live from town. We don’t really see what brought them to the middle of the woods. We don’t really get a sense of how good of friends they are. But most of all, and what surprises me, is we don’t see what compelled Carbon to make an entire film about them, but we know by the tenderness and care he took in the one-sided interviews, there was something.

There are moments, mostly from the architect, of interesting philosophical musing (that could also be categorized by “Oh, Grandpa!”) as he complains about how art is dead because of computers. I have long ago filed phrases like these into my “movies used to cost 5 cents” drawer. I don’t mean to downplay the value of wisdom and glimpses into the past via the lives of those still with us, but those moments are the closest elements we get of what drew Carbon to these men and, thereby, illuminating to the audience what he saw. But then, rather than really digging into that, we get another hard cut to one of them in the shower, his genitalia in plain view.

I’m at a loss. I want to see what Carbon saw. I want to be compelled so badly with each passing second. It’s interesting but isn’t evocative, which I think is what the artist exactly did not intend. In its quest to tell the stories of two eccentric, elderly men in their own words, it falls flat with its lack of linkage or “aha!” moment(s).

But that’s just story, and film is more than story. What of cinematography? It’s good sometimes and shaky in others, and I mean the latter literally. That’s fine; it kind of adds to the intrigue. I can imagine Carbon trekking to them with a case full of rented cameras and saying, “Action!” and then not saying, “Cut!” for a few months. Some shots are gorgeous, and I’d love to see them turned into cinemagraphs, particularly of the landscapes. If you’re on a bender for how any filmmakers get some neat shots, go ahead and spare the hour-long runtime.

If you grew tired during this review of how many times I wrote “two eccentric, elderly men,” then the film will feel no different. It wants you to know those four words. If you’re like me, you’ll come to the end wondering if it’s a mystery or a repetitive collage. Will he take that boat out of the garage? Or does it matter? You could ask me again in 15 years what I make of Sunnyside and I still wouldn’t be able to tell you with a powerful sense of conviction. –Dylan Davis