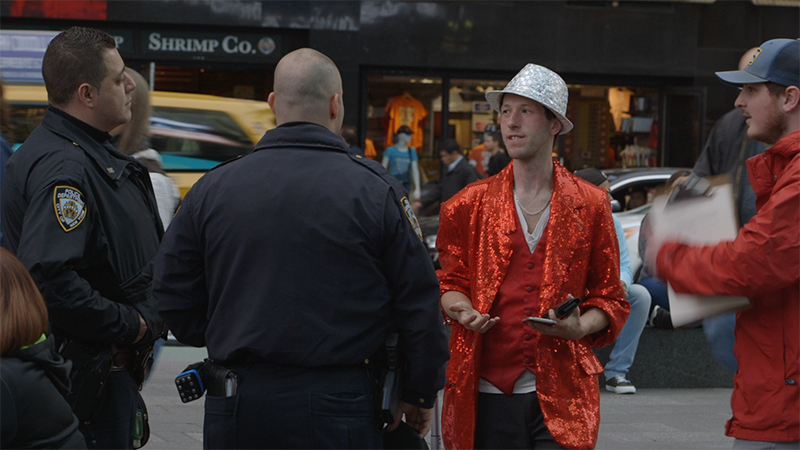 The Professional is a modest documentary, that follows the zany, nonstop-action life of Pennsylvania entertainment entrepreneur Stevie Blatz. He’s a young man who does a little of everything and has a finger in every pie. The epitome of a small-business owner, Stevie does a lot of everything, and mostly on his own. He sees the value and the profit in so many things, yet still struggles with maintaining his business, which includes booking weddings to DJ, children’s birthday parties to rent out snow cone machines to, magic and comedy performances and the rental of myriad other services and machines.

The documentary, though it seems to be focused on Stevie’s busybody life, also provides a peek into what the world of entertainment looks like as of 2017. Stevie’s forays into performing magic on the streets of New York City seem somewhat sad, and though we’re meant to root for Stevie—or to at least observe and admire his enthusiasm for straight-jacket escapes and walking on cut glass—what is most tangible is the general disinterest of the public toward tricks that would have easily gathered crowds 50 years ago. There is something remarkable about the small groups that do gather around him, and it’s these small victories that make Stevie’s ventures feel less hopeless and more heartwarming.

But still, stress plagues Stevie at every turn, despite his love of entertaining and spreading fun with the many moving parts of his business—popcorn machines, wedding tents, rentable crystal-ware, a DJ setup and magician gear. He does stand-up, he does comedy, he does it all—but even his stand-up routines are peppered with nerves, as he talks about himself and loses his train of thought. The directors, Daniel LaBerbara and Dylan Avery, take a hands off approach with Stevie, never pushing him to explain himself too much and asking simple questions that Stevie takes and runs with. He’s asked about his business, about his relationship with his mother, with whom Stevie is constantly arguing with about money. Her very presence seems to aggravate Stevie in a concentrated way, many times a normal amount of annoyance usually felt by the kids of overbearing parents. Her presence in his finances, her concern about where he is at all times—it all seems to touch a nerve that Stevie can never fully explain.

Though the documentary’s focus is on how Stevie is different from other people, one finds that Stevie is just attempting to live the American dream like so many other people. He works hard to make his business a success, and even if he often fails, his efforts could maybe be inspiring for some. His lifestyle shows the stress of running one’s own business, of being messily tied up in a finance tangle with a loved one, and also maybe even the particular stress of attempting to be both a successful career-person and an independent adult as a millennial in 2017. The Professional is an apt title for a film about someone going through the realest hustle, of owning one’s own business and trying to keep a life together around it. Stevie does his best to date, to have fun with his stand-up routines, all while maintaining his business. So few young people can have it all these days, but The Professional shows us one young man’s attempt to try.–Erin Moore