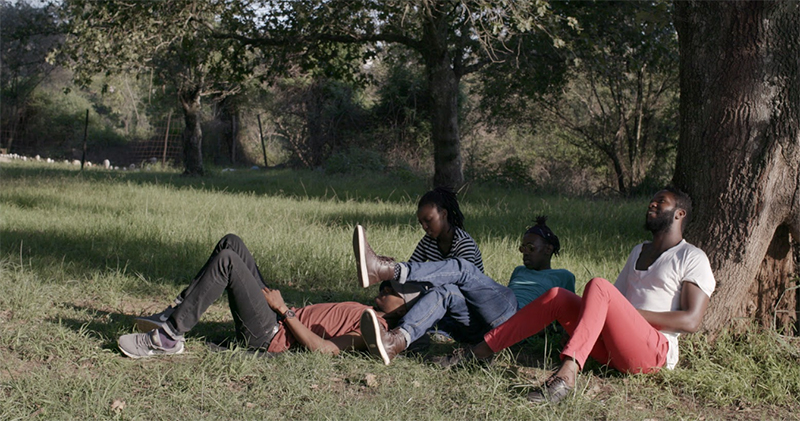 Slamdance Film Review: We Are Thankful

Slamdance Film Festival
We Are Thankful

We Are Thankful tells the story of Siyabonga (Siya) Majola, a young, daydreaming, aspiring actor in the KwaZulu Natal region of modern South Africa. The film’s director, Joshua Magor, had placed an advert seeking extras for an intended film project in the region. After meeting Majola in the recruitment process, Magor scrapped his original intentions entirely in order to tell the story of the young man in the docufictial format final cuts. What was meant to be fiction transformed into the retelling of Majola’s miniature pilgrimage to change his own story. The film is a simple reenactment of the journey from dream to daring with all of the actual players revisiting their reality onscreen.

Majola and his cohorts are refulgent exemplars of the youthful survivorship of a fraught cultural and historical narrative. They navigate the racial and resource-driven tensions of their post-apartheid world with pluck, humor and resilience. When the opportunity to join in on a U.K.-based film coming to a nearby town is advertised, Siya and his thespian peers conjure several creative maneuvers for him to make his way into the production. The dubiousness of Siya’s friends and neighbors that he could forge a wildly different path than the familiar and oft scarce means of survival they’ve become accustomed to does little to dissuade him. As he makes his way to meet with the film’s production crew, Siya resiliently resources his journey with the help of his community, his endurance and his cleverness. Not content to disappear into the bustling milieu of his township, he often seems restless, even in his frequently pacific demeanor. The viewer will seamlessly find themselves driven to join Majola in his innocent wanderlust and prayers for a different, “lighter” path.

Majola possesses the presence of a humble yet standout leading man, with a soft intensity and charm that’s effortless—perhaps comparable to an early-career Djimon Hounsou. Often, Majola doesn’t need dialogue at all for the notions and sensations of his story to come forward. It would be veritably unjust should this fresh, passionate performer not unearth a rich career in the wake of the film. His inner intensity smolders through his journey, perspiring his desire to create a new space for himself in the world he has known his entire life. Siyabonga Majola is a dreamer in the most tentative and grounded fashion.

This film takes on a meta existence and self-awareness similar to the works of Charlie Kaufman—with a story of a protagonist and a film being made in the film itself. The narrative of Majola and Magor’s powerful intersection is beautifully potent. The actors are themselves— the real people who have lived the storyline, reflecting an authenticity that becomes a throughput of the film. With warm hues and an organic, effortless softness, the film pulls the audience into Siya’s inner circle and deep inner life. The lushness of the land comes through in the purely natural soundscape with no musical accompaniment. Devoid of sensory distractions, the audience is brought into Majola’s reality and his desire for it to broaden.The film closes with his humble prayer for a brighter future and his abundant gratitude for the audacity to hope for its manifestation. We Are Thankful and its protagonist are genuine, real and undeniably lovely in their authenticity. –Paige Zuckerman