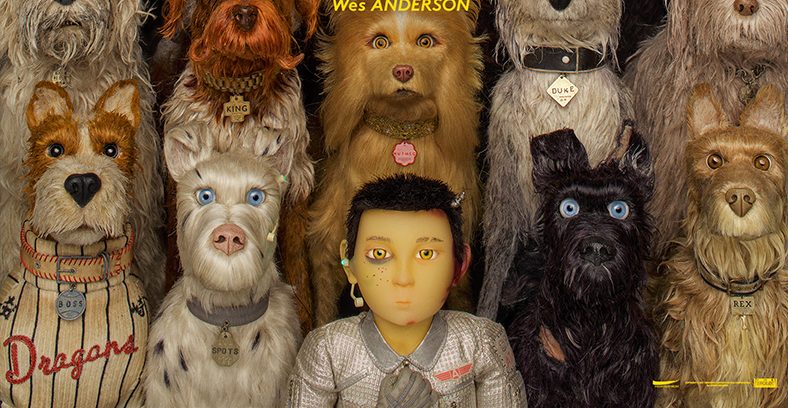 I have always found director Wes Anderson’s films delightfully charming and full of wonderment and awkwardness. There’s something special about a filmmaker’s craft when you can recognize their unique brushstroke within the first minute of each of their productions. In 2009, Anderson dove headfirst into the world of stop-motion animation with the witty Fantastic Mr. Fox. Now, nearly a decade later, he continues the laborious task with the creation of Isle of Dogs. Set in the not-too-distant future Japan, the overpopulation of sickly canines has become virtually unbearable. Rather than seeking a cure for the illnesses, the ghastly mayor banishes all dogs to Trash Island, and that includes his nephew Atari’s pet, Spots (voiced by Liev Schreiber).

The majority of this culturally infused tale follows a pack of exiled pooches voiced by an all-star cast including Bryan Cranston (as Chief), Edward Norton (as Rex), Bob Balaban (as King), Bill Murray (as Boss) and Jeff Goldblum (as Duke). As the posse strives to survive in the harsh conditions, they cross paths with Atari (Koyu Rankin), who desires to be reunited with his long lost buddy.

Once again, Anderson creates a mesmerizing setting with clever tactics to transport the audience into his world. At points, a random character interprets the spoken Japanese, and at other times, the viewers are left to decipher the un-subtitled dialogue on their own. The project is full of heart and charisma, which is not unusual for the director’s repertoire. The most engaging element within the creation is the uniqueness of the animal’s appearances and the attention to detail with their fur in a stop-motion universe. The message viewers of all ages can walk away with: What kind of individual do you want to be, no matter what type of cards life deals you? It’s something to ponder well after the closing credits. –Jimmy Martin