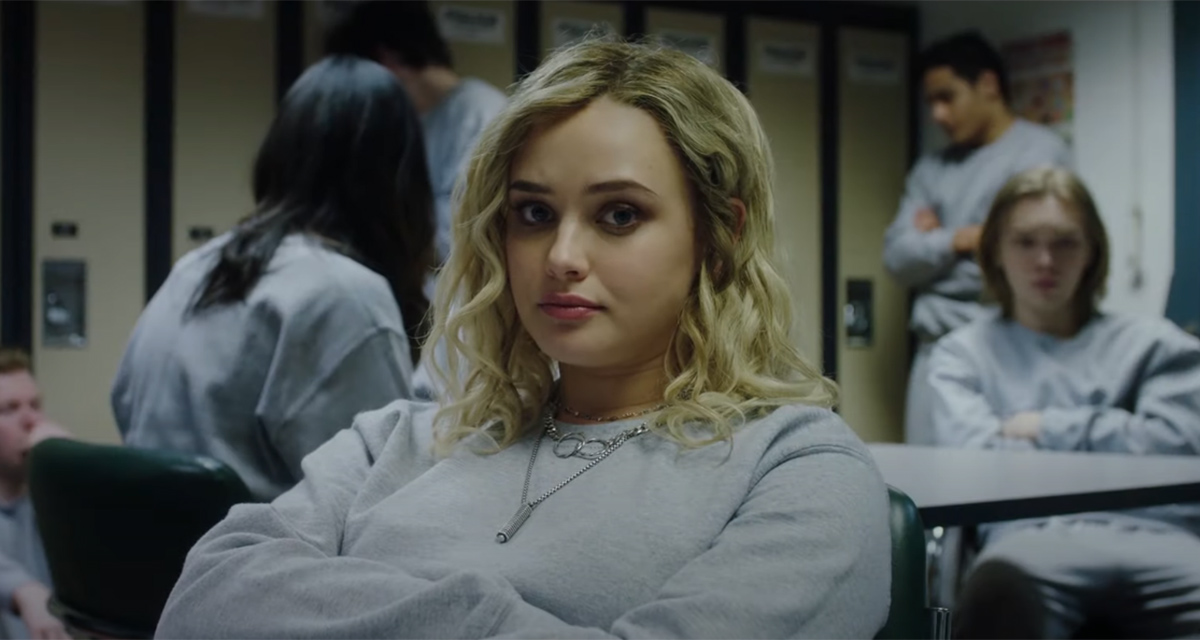 Awesomeness Films and Jurassic Party Productions
In Theaters 10.02
Streaming on Video on Demand 10.6

Just when I found myself thinking, “If I have to sit through another teen romance, I’m going to explode…

Spontaneous: Mara (Katherine Langford, 13 Reasons Why, Knives Out, Cursed) is a normal, moody, disaffected high school senior who is going through all of the normal pangs of being a teenager: academic pressure, trying to fit in socially, sex and hormones and—of course—worrying that she’ll be the next one to abruptly burst apart in a grotesque eruption of blood and guts.

The students in Mara’s high school are inexplicably starting to spontaneously combust, one by one, with no explanation. After the first student explodes in the middle of class, a boy named Dylan (Charlie Plummer, Lean on Pete, Words on Bathroom Walls) decides to tell Mara about his secret crush on her, because life is too short to waste. Mara and Dylan’s courtship begins, punctuated by the occasional detonation of one of their friends or acquaintances, but the terror of the situation is mitigated by the outlook that when tomorrow is so uncertain, it’s time to start living for today.

Screenwriter Brian Duffield (The Babysitter, Underwater) makes his directorial debut with this adaptation of Aaron Starmer‘s novel, and it’s an attention getter that is likely to land the director bigger (if not necessarily better) things. Spontaneous is a twisted, dark and morbid, but it’s also often a very sweet and surprisingly relatable look at that strange experience that comes between childhood and becoming an adult. The ludicrous premise is so out there that it actually allows the film to break free of the shackles that have been on so many other teen movies this year. And instead of being pulled out of the reality by the cringe inducing moments of phony contrivances and Hollywood touches, I found myself taken aback by how much truth there is inside these wacky trappings. The clever script wisely chooses not to force the quirkiness to a point where it becomes smug or contrived, and the movie is allowed to just be itself.

Langford is terrific in the lead role, with a star quality that shines through whenever she is on screen, and Plummer, one of the most refreshingly natural young actors working today, adds considerable charm. There are moments when elements of the story start to feel like an unintentional parody of the moment, as quarantining, the CDC and a search for the right drug to treat this problem all enter the picture, and sometimes it’s hard to know whether to squirm or giggle.

The human explosions are shocking but tastefully done, tricking you into thinking that you’ve just seen a lot more than you really have. While they are sometimes played for laughs, there are some genuinely very harrowing moments, and Spontaneous does have a definite element of horror. It also gets a bit more heavy and emotional than you might expect in the third act. But this is not a jarring tonal shift so much as a portrayal of the realities of life in a dangerous and confusing world. For me, all of this made for a satisfying mixture and a strikingly original movie.

Spontaneous is a bit like the best films of John Hughes, except that the teenagers look more like actual teenagers and the situations feel more real and universal. It’s not going to be a film that I watch over and over again and memorize line for line, but it’s one that I’m very glad to have seen and to be able to recommend, and it’s a special movie that may well become a cult classic. –Patrick Gibbs